We’ve reached the halfway point of Ms. Marvel with this week’s episode, “Destined.” The previous outing found Kamala dealing with the repercussions of her stunt at AvengerCon, with the Department of Damage Control hot on her heels. After testing the limits of her abilities and saving a young boy from falling to his death, Kamala found herself on the run from Agent Deever and her team.

Thankfully, Kamran, Kamala’s swoon-worthy crush, saves her from the DODC while his mother, Najma, sits in the backseat. Kamala had visions of Najma earlier in the episode.

So, “Destined” pulls back the veil on Aisha’s background, Kamala’s great-grandmother. We learn more about where the bangle came from, who Aisha was, and the mythological spirit from which Kamala is descended. Besides the much-needed exposition, Ms. Marvel‘s “Destined” delivers on the action front, producing fun fight sequences that put Kamala’s physical prowess to the test. Additionally, the episode gives us plenty of heart while honing in on the vital theme of family.

Blast from the Past

We open with a flashback to British-occupied India in 1942. Najma searches the rubble of a collapsing cave for the bangle, which she finds attached to a rotted arm. Aisha emerges from the shadows with an air of authority. We learn there’s a second bangle, but the consensus is the British already have it.

Aisha puts on the bangle, and her eyes glow purple à la Kamala’s. British soldiers close in on them, so Aisha and Najma part ways, vowing to find each other again.

Here’s What You Need to Know 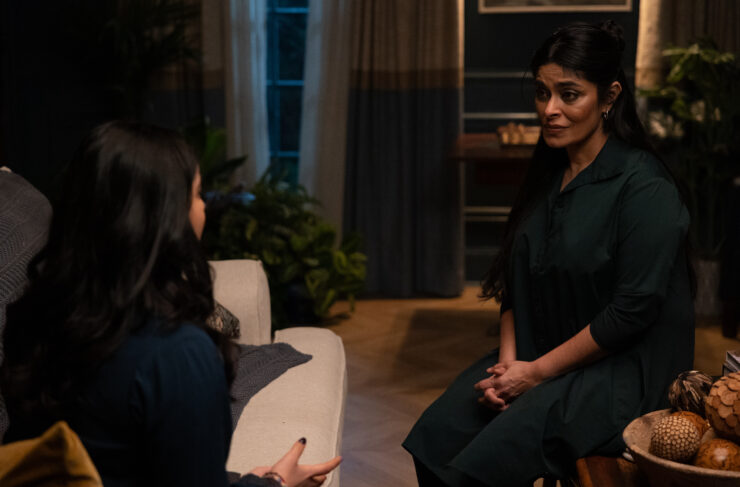 Fast forward to the present, where Kamala grills Najma and her squad regarding their connection to Aisha. Najma explains they’re all from another dimension, as was Aisha. They were exiled, and when they got close to finding a way home, they were separated. Unfortunately, Najma and the others never reunited with Aisha after Partition.

Najma pulls Kamala aside and fills in some blanks. She never knew Aisha had a family until Kamala put on the bangle and she sensed the presence of Noor (light). Najma adds that they all possess Noor, which slows the aging process. However, Najma cannot access the bangle’s full potential in this dimension since she’s an outsider.

Najma hopes Kamala, being from this dimension, can help her and the others go home to the Noor dimension by utilizing the bangle’s abilities. We also learn that Najma’s kind are known as the Clandestines, and they are Djinn. 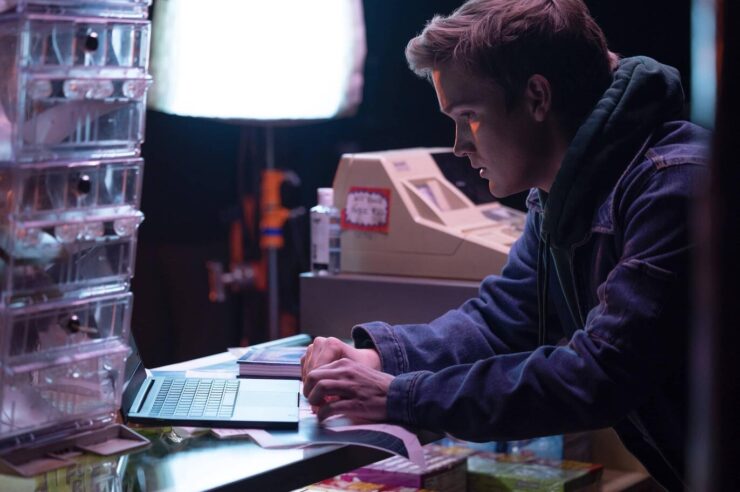 Later, Kamala vents to Bruno about what she learned the night before. She asks her BFF to dig around for info on the Clandestines and the Djinn. Bruno mentions a paper written by Dr. Erik Selvig (of Thor fame — it’s always fun when Marvel makes subtle references like this).

Bruno finally discloses his acceptance into the Early Immersion program at Caltech, but he won’t leave until he knows Kamala’s okay. Oof. This dude’s got it bad.

Meanwhile, Agent Deever from the DODC barges into the mosque to survey the area for “Night Light.” Nakia, an almost-board member of the mosque, schools Deever regarding search warrants in the mic drop moment to end all mic drop moments. Sheikh Abdullah asks Deever to return when she can legally search the place.

Nakia tells Kamala about Deever’s brusque entry while the latter rewatches footage of herself saving the little boy from last week’s episode. Bruno told Kamala that she went viral, but the name “Night Light” has to go.

Then, Nakia reveals she’s now a bona fide board member; however, Kamala’s still pretty distracted by the news that the DODC is after her. Of course, Nakia doesn’t know that yet. 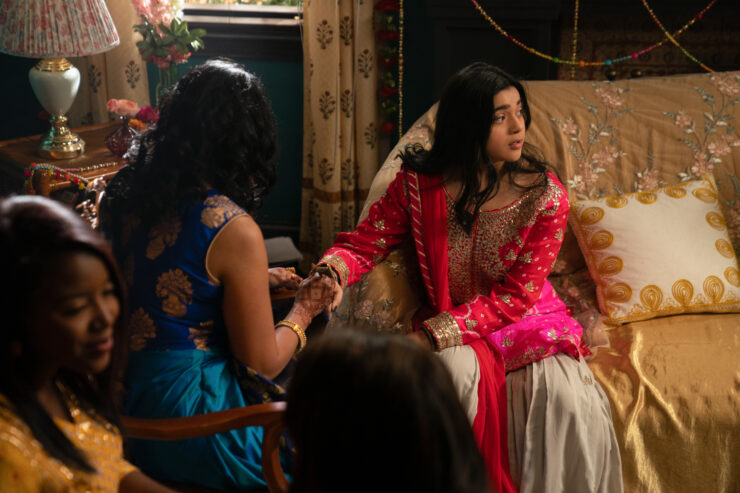 The Khan family hosts a Mehndi party the day before Aamir and Tyesha’s wedding. Kamala overhears everyone chatting about the DODC’s extensive search for Night Light, making her increasingly nervous. She seeks advice from Sheikh Abdullah, who reminds her that being “good” isn’t a thing you are but instead, something you do. 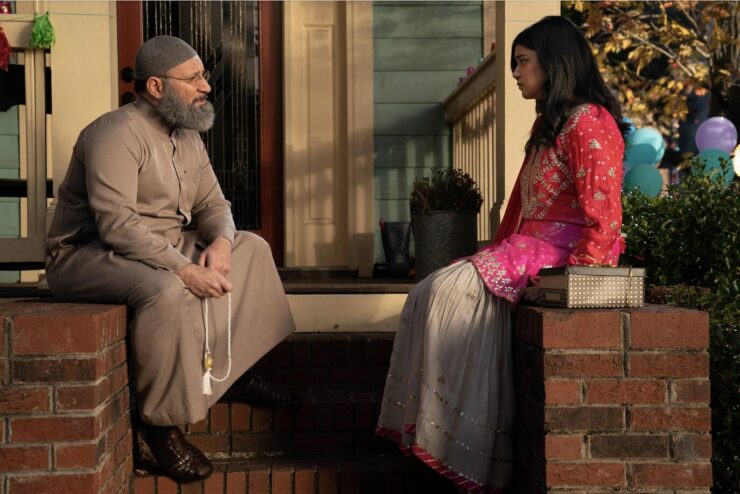 Next, Yusuf heads into Bruno’s workplace to purchase some sugary treats without Muneeba’s knowledge. He notices Bruno’s research on the Djinn, remarking that it’s written in Urdu. Yusuf reads it aloud in English, much to Bruno’s dismay.

Later, Bruno reunites with Kamala to divulge his research. He tells her that she’d need to harness the sun’s power to travel to another dimension. Kamala notes that Captain Marvel wouldn’t waste time wondering if what she’s doing is the right thing — she’d punch a hole through space and time. Bruno urges Kamala to exercise caution, as traveling to a different world is dangerous.

Kamala is all about absorbing profound wisdom from her elders in this episode. She asks Muneeba for advice without disclosing the particulars of her situation. Muneeba recounts when she moved to America with Yusuf and Aamir, thinking it was her “mountain.” She encourages her daughter to lean on her family, as nobody has to do anything alone. It’s a sweet mother/daughter scene encapsulating this series’ essence. 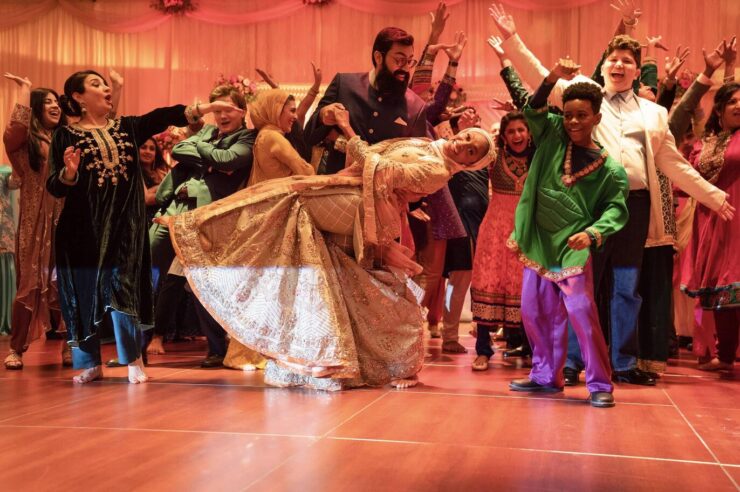 It’s time for a wedding! Aamir and Tyesha’s marriage ceremony is a gorgeous affair, brimming with love and genuine tenderness. Meanwhile, Najma scrolls through Kamran’s texts to Kamala. She’s taken aback by his nonchalance, noting they must get home immediately and the only way there is with the bangle. Najma and the others plan to crash the wedding reception to take Kamala’s bangle forcibly. 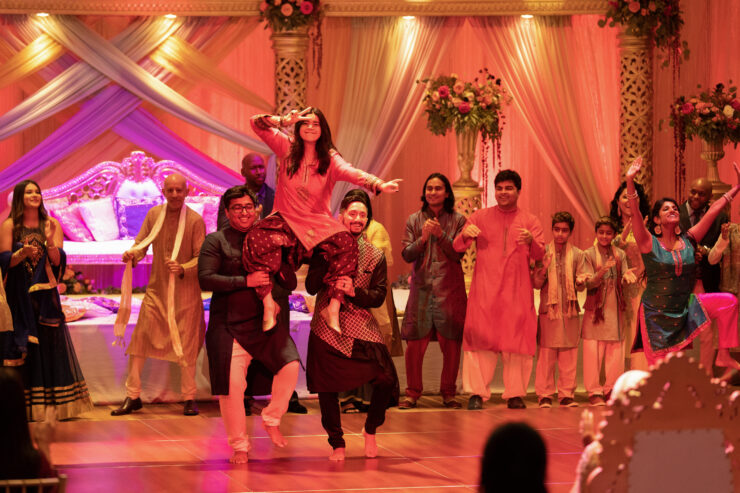 Then, we see everyone celebrating at Aamir and Tyesha’s reception. There’s dancing and laughter. All in all, it’s enough to give anyone significant FOMO. Side note: Brown Jovi is a perfect name for a Bon Jovi cover band.

Kamran appears unexpectedly, ushering Kamala aside to warn her about Najma. Kamala pulls the fire alarm while Bruno escorts the partygoers outside, away from the inevitable action.

The Showdown to End All Showdowns

What transpires next is a white-knuckled, high-octane battle as Kamala fends off Najma and the others. Of course, she’s still not a trained fighter and spends most of this skirmish defending herself with the bangle. After one of her foes hurts Bruno, Kamala unleashes a burst of power shaped like an outstretched fist, punching her enemies in one fell swoop. You go, girl!

Kamran urges Kamala to get “Brian” (Bruno) out of there while he dukes it out with Najma’s pals. Unfortunately, they corner Kamala and Bruno. Najma touches the bangle, unlocking a vision of a train from Karachi barreling toward her and Kamala.

The DODC arrives on the scene and arrests Najma, Kamran, and the others. If you listen closely, you can hear the signature Iron Man weapon startup sound effect when they barge in. Thankfully, Kamala and Bruno flee unscathed (for the most part).

Outside, Nakia catches Kamala in the act of using her powers. She discovers that Kamala is “Night Light,” AKA the reason the DODC barged into the mosque. Nakia feels betrayed, but Bruno encourages Kamala to leave before the DODC captures her, so our hero vows to explain everything to Nakia later.

At home, Muneeba and Yusuf confront Kamala, asking her if she pulled the fire alarm at Aamir and Tyesha’s reception. Muneeba urges Kamala to be honest with them, especially after witnessing the folks with Kamala getting arrested. However, Kamala keeps mum, refusing to put her family in danger.

Later, Sana video calls Kamala, revealing she saw a vision of the Karachi train. Kamala saw the same visual after Najma made contact with her bangle. Sana presses her granddaughter to travel to Karachi with Muneeba for a much-needed visit.

It sounds like next week’s episode will whisk Kamala and Muneeba away to Karachi, which could yield information to help Kamala learn more about her past, her ancestry, and her new abilities. Najma also might rat Kamala out, putting the DODC on her trail.

This is a massive stretch, but it would be cool if Marvel brought Dr. Erik Selvig in for a cameo to delve into his research of the Djinn. Perhaps Bruno runs into Selvig for his Early Immersion program at Caltech. Then, he helps Bruno and Kamala better understand Kamala’s family. One can dream.

What was your favorite moment from “Destined?” Join the conversation alongside other Ms. Marvel fans in the Let Your Spoiler Sideshow Facebook Group, and don’t forget to Let Your Geek Sideshow!