Part IV brings Obi-Wan to the princess’ rescue. Here Ben will encounter dark truths, and more will be revealed about the nature of the Inquisitors™. After you’ve checked out our recap for Part III, keep reading for our recap and review of the fourth Obi-Wan Kenobi episode below — plus get some of our predictions for Part V. 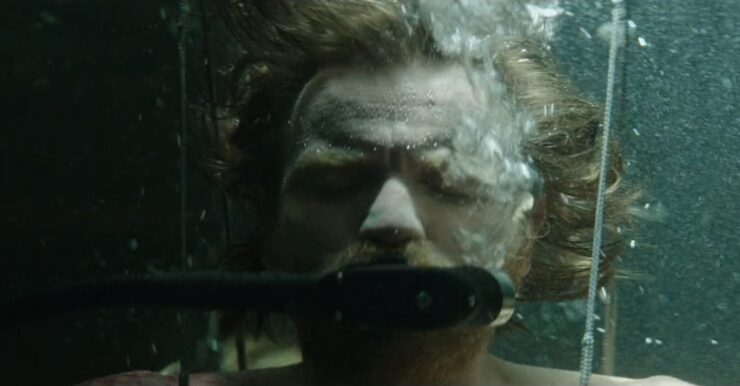 The episode begins with a hazy transfer to the planet Jabiim™. Overwhelmed with pain, Obi-Wan watches his own rescue in flashes. And then he’s in a bacta tank™, the only equipment capable of healing such wounds. However, it can’t heal wounds of the mind. Obi-Wan’s PTSD haunts him as quick cuts parallel to Darth Vader’s own burn scars and bacta meditation.

Ultimately this scene is one of the strongest in the show thus far. And it’s also the first time we see anyone force their way out of a bacta tank. Against Tala’s recommendation, Obi-Wan bursts onto the surface and insists he’s ready to find Leia. 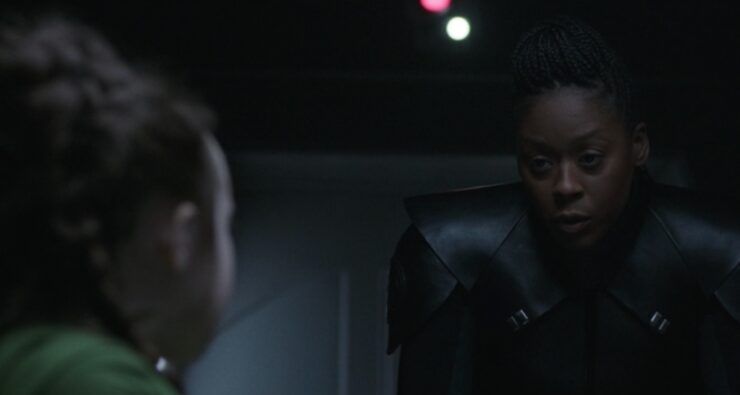 Meanwhile, Third Sister™ has locked Leia in an interrogation room. Luke Skywalker’s™ stubborn twin sister isn’t giving any information up, however. Staying true to her depiction in A New Hope™, Leia sasses her captors. Her mind is just too strong to use the usual tricks on.

On Jabiim, Obi-Wan needs an assist that some of the Rebels are unwilling to give. Roken™, played by O’Shea Jackson Jr., thinks they should stick the Jedi™ on the first transport off-world. Roken lost his wife, also a Jedi, to the Inquisitor’s ceaseless purge. But Leia’s fate, and Obi-Wan’s assurance that he will succeed, convinces Roken to at least try. 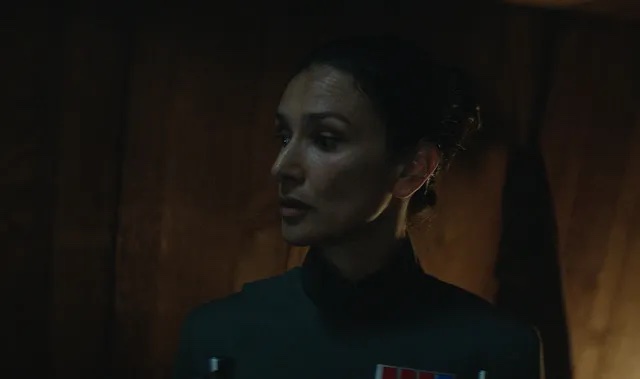 Tala dons her Imperial Officer disguise. She has faith her Class C clearance credentials will get her into the Nur™-based fortress. Such a high level rank does make us wonder what Tala did for the Empire to earn such prestige. Is her commitment to the cause her atonement? And how did she get involved in this Jedi-ferrying operation? Questions still abound about her backstory. 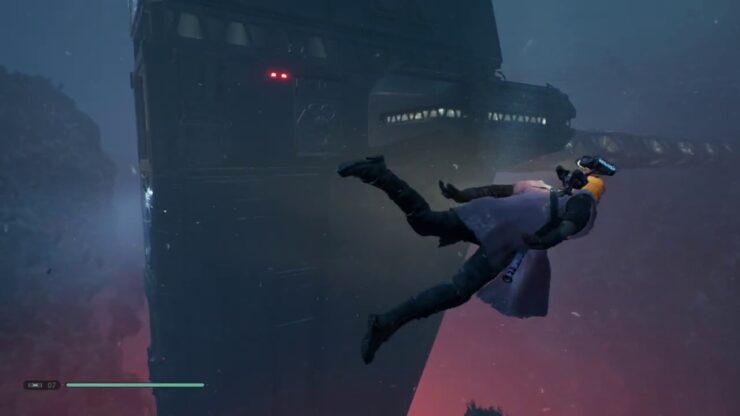 Finally, Obi-Wan Kenobi arrives on Nur. The water moon, located in the Mustafar™ system, is strictly Darth Vader’s territory. Already audience members are brimming with excitement as we imagine another encounter between Master and Apprentice.

While a second showdown doesn’t happen quite so soon, Star Wars fans will rejoice as Obi-Wan swims toward Fortress Inquisitorius™ — the nostalgia is strong with this scene. Not only is Obi-Wan using the breathing apparatus he and Qui-Gon Jinn™ utilized in Episode I: The Phantom Menace™, but this path is straight out of Jedi: Fallen Order™ (pictured above). We won’t say too much more, as an analysis would include major game spoilers. But gamers know Part IV is for them.

Next Obi-Wan must stealthily search for a restricted area. Once again Jedi: Fallen Order players will enjoy the homage to Cal Kestis’™ own journey into Fortress Inquisitorius. Complete with seeker droids, winding watery paths, and nervous stormtroopers™, the visuals and actions are straight out of the Star Wars video game.

Jedi: Fallen Order players, we know you got chills when you saw this next part. When Leia still won’t reveal the Rebels’ location, Third Sister switches tactics. She drags Leia into a dark, sterile, sinister room. There is a single chair surrounded by red floor lights. This is where Inquisitors are made. And tiny, Force-sensitive Leia is about to experience the full power of Third Sister’s rage. 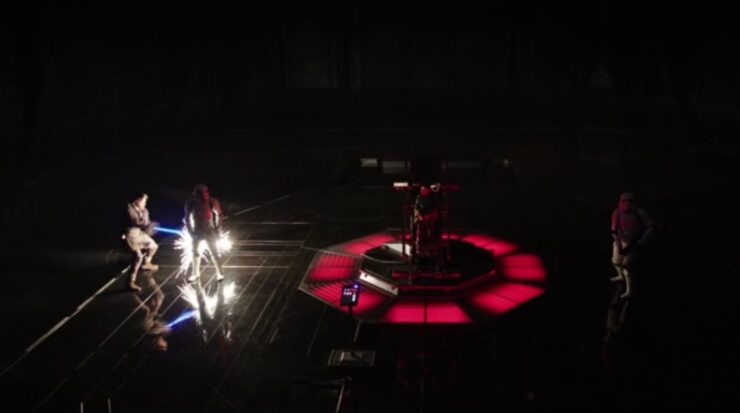 … Until Tala calls Third Sister away with a distraction. Third Sister stomps up to her meeting, buying Leia some much needed time. Obi-Wan Kenobi is on his way, of course, but he’s been a little sidetracked by another horrible feature inside the fortress: a Jedi tomb.

Rebels™ fans may recognize the dead Jedis’ amber encasement as what Luminara Unduli’s corpse was carried in during a ploy by the Inquisitors to capture Kanan Jarrus™. Many Jedi, including younglings, are shown preserved and petrified in this trophy room. There is even a brief glimpse of Tera Sinube™, a Jedi Master who appeared in episodes of The Clone Wars™.

Although an impressive liar, Tala is taken for questioning. Third Sister is delighted at the prospect of double interrogations. Thankfully, Obi-Wan gets back to Leia before Third Sister, and the old Jedi fights his way out of the room. Tala also manages to evade her stormtrooper captors and rendezvous with Obi-Wan. Once they meet back up, Obi-Wan puts on an ill-fitting poncho and the group tries to sneak out of the base.

Of course, Third Sister catches up with the trio. But before she can strike Obi-Wan down, two Rebel pilots arrive. They open fire on the base, obliterating many of the antagonists inside. This attack gives Tala, Obi-Wan, and Leia the ability to escape back to Jabiim. During their escape, Third Sister does manage to strike down one of the pilots, Wade Resselian™, which leaves the second pilot, Sully™ (Maya Erskine), in a place of deep mourning. Our trio makes it back to the Rebels physically unscathed, but emotionally this whole ordeal is going to be a lot to unpack. While our heroes fared well, our villain did not. Darth Vader warned Third Sister of the consequences should she fail him. Storming into the fortress, the Sith Lord™ raises her off the ground into a Force choke.

But, at the last moment, he spares her. Why? Apparently she’s put a tracker on Tala’s ship so that their prize can be far more rewarding. Obi-Wan is still what matters most, but Third Sister’s ambitions have set her eyes on the elimination of the entire Rebel system. Is Reva™ telling the truth?

At the end of the episode, we see the tracker. Sadly, it’s not just a signaling device. No, Third Sister has implanted a tracking device inside Leia’s beloved droid companion Lola™. And Third Sister did this all the way back in Leia’s initial interrogation. No wonder she’s ranked so highly among her peers, then — her intelligence and fighting prowess are almost unmatched.

Now, the plan is to return Leia to Alderaan™. Will Obi-Wan Kenobi be able to bring her home in Part V? Or will there be a vicious battle on Jabiim when the Inquisitors decide to raid the planet? It all depends on how swiftly our antagonists choose to act. Judging by Third Sister’s bloodthirsty attitude, however, it’s safe to say evil is already on its way.

What did you think of Obi-Wan Kenobi Part IV? Join the conversation alongside other Star Wars fans in the Let Your Spoiler Sideshow Facebook Group, and don’t forget to Let Your Geek Sideshow!