Part III brings Obi-Wan and Leia to a mining colony. Here they will try to find their way home, and Ben’s past will catch up to him. After you’ve checked out our recaps for Part I and Part II, keep reading for our recap and review of the third Obi-Wan Kenobi episode below — plus get some of our predictions for Part IV. 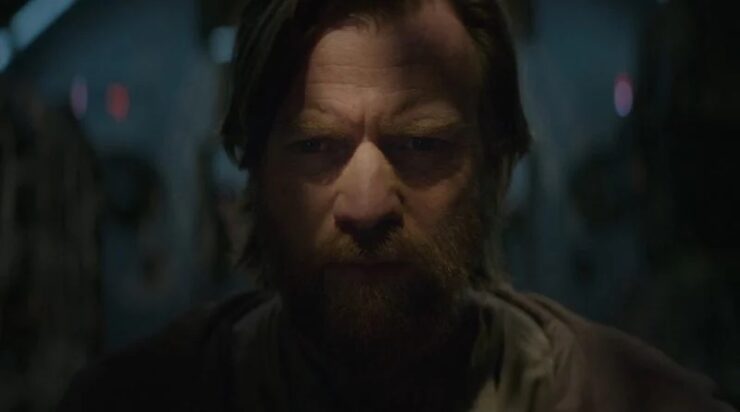 The episode begins with Obi-Wan Kenobi asking for guidance. As you may recall, in Revenge of the Sith™ Yoda™ told Obi-Wan that he would be able to commune with Qui-Gon Jinn’s™ spirit if he trained hard enough. It seems in Obi-Wan’s 10 years of exile, he still hasn’t mastered this sophisticated Jedi™ concept. Nonetheless, Obi-Wan appeals to Qui-Gon even as he’s flooded with memories of his fraught past.

Meanwhile on Mustafar™, Darth Vader™ is armored up after meditating in his bacta tank™. He meets with the Third Sister, whose hologram is the solitary other presence in the Sith Lord’s™ barren palace chamber. In an exciting voiceover cameo, we hear the original Vader, James Earl Jones, instruct Reva™. “Kenobi is all that matters now,” he insists. Then he promises her a place by his side if she succeeds.

Also worth noting in this scene is the mention of the Grand Inquisitor™. Reva’s sentence about his condition is interrupted, so it’s not a confirmed death. Yet she blames his incapacitation/demise on Kenobi. When/if the Grand Inquisitor returns, will he correct this misinformation?

Turn on the Light

Having finished his attempts to contact Qui-Gon, Obi-Wan returns to Leia. She’s bored and nervous about their cargo ship’s slow crawl through space. Obi-Wan cheers the princess up by fixing the little droid Lola. Fortunately, they soon arrive on the mining planet Mapuzo™.

The pair walk for a long time. Obi-Wan starts to mistrust Haja Estree’s™ coordinates. Plagued by nerves as well as continued turmoil about Anakin, Obi-Wan sees a robed form in the distance. When the man turns, it is Anakin — pale, with his yellow Sith eyes, but not yet burned. Obi-Wan is clearly shaken by this sight. Will he ever confront these emotions and scars? Or will he continue to repress them, as is the typical Jedi way?

Finally, we visit the Inquisitors’ headquarters. Jedi: Fallen Order™ game players might recognize the imposing tower. Located on the watery planet Nur™, the fortress serves as a training facility as well as a prison.

Here the Inquisitors discuss tracking Kenobi. Fifth Brother™ belittles Third Sister, asserting that he is next in line for the role of Grand Inquisitor. Yet Reva gets to pull the Vader card, telling her peers that she’s in charge of the hunt. It appears that only when the Sith Lord gets involved do their power-hungry and petty squabbles cease. 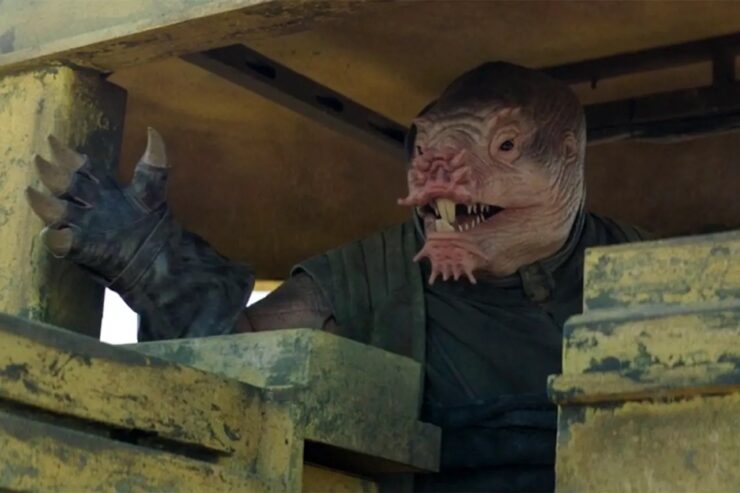 Wandering Mapuzo, Obi-Wan Kenobi and Leia are picked up by Freck™ the friendly transport driver (Scrubs’ Zach Braff). Unfortunately, Freck is also a nationalist who staunchly supports Imperial order. The tension rises as Obi-Wan hurriedly hugs his robes around himself, trying to stick with their father-and-daughter farmer backstory.

During this time with Leia, Obi-Wan also mentions a vision he once had of a brother. He admits he was very young, and the memory is hazy. Canonically Obi-Wan doesn’t have a brother; this content is from Legends, in which a young Obi-Wan sees an infant Anakin through his Force vision.

Part III makes it abundantly clear that Obi-Wan Kenobi isn’t a spy. When Freck offers some stormtroopers™ a ride, the suspicious soldiers grill Obi-Wan about his presence on the planet. Obi-Wan ends up hinting to Leia that he knew Padmé Amidala™, and Leia is not pleased by the amount of secrets between them.

Then at a check point, Freck turns our heroes over to the troopers. A probe droid identifies Obi-Wan once he’s forced to remove his hood. And this is where the fun begins.

Fortunately, a rebel in disguise (Game of Thrones’ Indira Varma) rescues Obi-Wan and Leia. She takes them into town to escape back to Alderaan™. Here we also meet NED-B™ the loader droid. He’s the strong but silent type, and therefore an instant fan-favorite.

Leading our heroes through a secret tunnel, the officer — Tala™ — explains, “We have safehouses like this throughout the galaxy.” Who is “we?” The audience assumes Tala is part of the Rebellion, but the Rebellion has barely formed by this point. While some questions go unanswered, we do get more information about this saving system. The attempted link between them all is called “The Path.”

Tala tells Obi-Wan that he is not the first Jedi to pass through. She also says that the Empire hunts down all Force-sensitive children, and she doesn’t know what happens to them. To fans who might not know, those children become Inquisitors … or they perish during the process.

Perhaps the most important part of this scene is that Quinlan Vos™ name drop. A recurring character in The Clone Wars™ animated series, Quinlan Vos was a Jedi Master who eventually became a dark side user under Count Dooku’s guidance. While this was initially a ploy to learn Darth Sidious’™ true identity, Quinlan was fully corrupted.

Eventually he turned back to the light when his lover Asajj Ventress™ sacrificed her life for him. Quinlan was reinstated into the Jedi Order prior to its fall. And apparently he assists in this underground operation now. Will we meet him on Jabiim™?

Vader arrives on Mapuzo with his Inquisitor entourage. He brutally rips through the place, killing innocents on his way to Obi-Wan while the Inquisitors watch and wait to round up the rest of the civilians. The intent is to strike terror, not to find any other Jedi. Because, like Vader said, Kenobi is the only one that matters to him now.

Obi-Wan leads Vader away from Leia and Tala to the outskirts of town. Vader chases his old master through sand and mining equipment. Obi-Wan deliberately pulls him farther back from his allies.

Obi-Wan flees until he’s forced to confront Vader. He finally uses his lightsaber, but he’s out of practice. Vader mocks him for his weakness and age. They trade blows under cover of darkness, sabers clashing with brilliant colors. Obi-Wan is clearly in anguish. Vader is holding back. Their fight is more subdued than we expect, but Obi-Wan is also not giving this his all.

Meanwhile, Tala leaves Leia to help Obi-Wan at Leia’s request. Reva enters the tunnels. Amid flashes to the Obi-Wan vs Vader fight and a decision we anticipate having disastrous results, the audience is left on the edge of our seats.

Despite Vader’s taunts, he and Obi-Wan are mostly well matched. Until, that is, Vader gains the upper hand with his classic Force choke move. He lifts Obi-Wan into the air, then strikes his red saber against the coal-covered ground. Flames rise up and roar around the pair. Then Darth Vader begins to drag Obi-Wan through the fire, explaining that it’s his Master’s turn to suffer.

It’s horrific, actually. The tables have been turned in the worst way. Thankfully Tala shows up, using her blaster skills to cause enough of a commotion that Vader and his stormtrooper battalion are cut off. She rushes to an ailing Obi-Wan, whose arm is covered in harsh burns. On the other side of the flames, Vader’s eyes burn with rage and the fire’s flickering reflection.

Vader doesn’t capture Kenobi. However, Third Sister is on the tail of the perfect bait. Left alone, Leia can only run as the powerful Inquisitor chases her back through the tunnels. Will Leia escape Reva’s clutches? Or will Vader and the princess have the scariest father-daughter reunion since the first Star Wars film?

As Vader promised, then, Obi-Wan’s pain has only just begun. Next week we will see how far Obi-Wan goes to save his old friends’ child, and how much he can endure before he faces Vader for real.

What did you think of Obi-Wan Kenobi Part III? Join the conversation alongside other Star Wars fans in the Let Your Spoiler Sideshow Facebook Group, and don’t forget to Let Your Geek Sideshow!