Please note the following article contains significant spoilers and plot points from episode five of What If…?

This week, in the fifth episode of Marvel’s What If…?, we saw Earth’s mightiest reanimated heroes hunger after the brains of friends and enemies alike. The episode opens with Bruce Banner attempting to warn Earth of Thanos, as he does in Endgame, but instead he encounters the undead versions of Iron Man, Doctor Strange, and Wong, who proceed to infect Ebony Maw and Cull Obsidian. Fortunately, Hope Van Dyne intervenes to save Bruce and they escape for the time being. In the much-anticipated zombie episode, absolutely nobody is safe. And as always, the rules of the multiverse bend for no one. 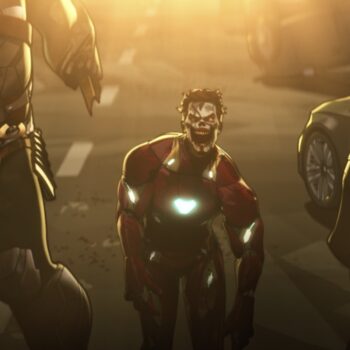 With four episodes left, we still have not seen an obvious connection or convergence of the timelines. But, “What If…Zombies?!” further validates the few certainties we’ve seen in the What If…? series. We know that there are Absolute Points, events in time that cannot be avoided. We know that there are also absolute truths, qualities in our heroes that are immutable. And now we also know that zombie Avengers keep their powers.

Which leads to the question: Why zombies?!

The Quantum Realm is full of unknowns and, apparently, viruses. Janet Van Dyne is revealed to be patient zero for the zombie virus when she is rescued by Hank and promptly infects him. Once again, a timeline-altering event is thanks to Hank Pym, which poses the question: How much damage will be done to the Sacred Timeline when Ant-Man and the Wasp: Quantumania premieres in 2023? And for that matter, are other timelines in danger as well? Now that the multiverse’s Absolute Points are being challenged and the various realities are colliding, the possibilities are endless.

After Janet and Hank escape the Quantum Realm, they proceed to attack Scott Lang while Hope escapes. In the span of 24 hours, the virus spreads across San Francisco and we see the Avengers land on the Golden Gate Bridge to face an onslaught of zombies. Hank buzzes in to bite Cap and from there, the world’s defenses fall like dominoes to the zombies, coinciding with the invasion of Thanos and his Black Order. 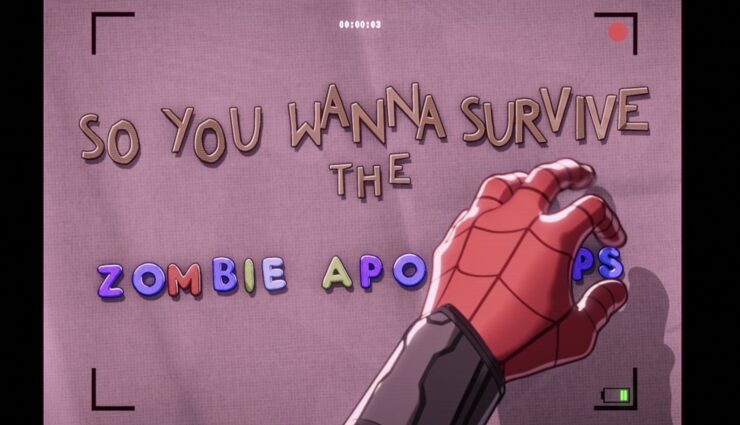 It doesn’t take long for the world to become overrun by zombies and for the remaining few survivors to adapt. Similar to the home video he made in Spider-Man: Homecoming, we’re introduced to this new zombie apocalypse by Peter Parker’s signature brand of pop culture humor. Peter’s “orientation video” offers survival tips and features Happy Hogan, Kurt, Sharon Carter, and Bucky Barnes, each of whom is labeled with cheeky subtitles that are worth a re-read.

But before Bruce and Hope (along with Doctor Strange’s cape) can finish watching, General Okoye interrupts with an update that there are reports of a potential cure to the virus. The squad leaves their makeshift safehouse, which is suspended by Peter’s webs high above the infested streets, and they head for Grand Central Station. Their destination: Camp Lehigh in New Jersey, the original base of operations for S.H.I.E.L.D.

Inside the terminal, the team splits up to focus on getting the damaged train running for their exodus to Jersey. At this point, the various horror and comedy elements that have been popping up throughout the episode really begin to shine. We first begin to see horror trademarks with Scott’s outstretched hand sliding down the foggy glass and when the intro’s epic fight score is replaced by eerie, discordant notes reminiscent of Psycho. True to his signature self-referential brand of humor, Peter continues the horror trope trend when he notes that anyone who has ever seen a horror movie knows that splitting up is asking for trouble.

From here on out, the hallmarks of horror abound: Peter accidentally causes a series of jump scares, enemies emerge loping from the shadows with bloodthirsty eyes, and beloved allies fall prey to gory, hard-to-unsee deaths (Did Okoye really have to slice Sam right in half? Yowch.) In her defense, Okoye also throws some legendary shade at American reality TV. The team finally manages to get the train moving and they’re on their way to a possible cure.

Just like in the Marvel Zombies comics, the zombies retain certain aspects of their abilities and personalities. As a member of the undead, Happy still repeats “Blam!” and Hawkeye, zombie or not, has deadly aim. And even when the world is full of ravenous zombies, Bucky and Cap are destined for a train showdown. Zombie Captain America is caught feasting on Sharon by Bucky and in the ensuing fight, zombie Sharon swallows Wasp. Bucky finally throws Cap’s shield through his beloved companion’s torso before he delivers their iconic shared line, “Sorry, pal. I guess this is the end of the line.” 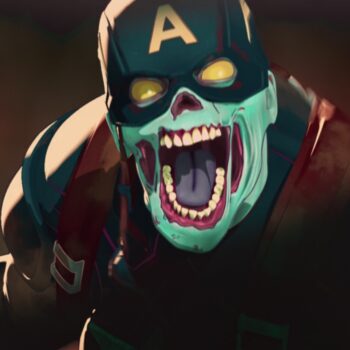 Unfortunately, when Wasp returns to regular size, she explodes zombie Sharon and exposes a cut on her shoulder to the virus. It’s in this somber train scene that Peter emerges as a leader among his older peers — made all the more surprising by his end-of-episode reveal that he had turned down Tony’s invitation to join the Avengers.

Even when surrounded by adults, Peter’s innate light shines through. As the team begins to despair over Hope’s declining health, he shares a quote from his Aunt May: “If we don’t keep smiling when they can’t, then we might as well be gone, too.” An effective leader, as Peter demonstrates, doesn’t give orders. They inspire those around them to be their best selves. This leads Hope to offer her greatest sacrifice: Carrying the team across the hordes of New Jersey zombies and over the Lehigh fence before she’s overtaken by the undead.

Significantly, this train segment also features the first MCU mention of Peter’s Uncle Ben. While of course nothing is confirmed until it plays out on screen, this inclusion of Uncle Ben, a pivotal figure in Peter Parker’s heroic trajectory, feels important. Readers might recall that in the House of M continuity, Ben Parker helps his nephew deal with Spider-Man’s exposed identity through a fake-death situation. Considering how Mysterio exposed Spider-Man’s identity in Far From Home and multiple Spider-Man figures will reappear from alternate timelines in Spider-Man: No Way Home, the web of intrigue continues to spin. While the multiverse expands and collapses, is there a possibility Uncle Ben could make a future appearance?

Only Uatu knows for sure.

As the sun sets on the camp, our team enters the Lehigh facility and Kurt provides the audience with some foreshadowing about Baba Yaga, a feared witch from Slavic folklore. Two jump scares later, Vision emerges from inside the camp’s facilities as the person who sent out the initial report. Inside, he explains that the Mind Stone has kept the zombies at bay because “it emits a sub-frequency that is not to their liking.” Bruce excitedly bursts out that the virus must be the result of encephalopathy, which means (for those of us who don’t have advanced scientific degrees) any set of diseases that affect brain structure and/or function.

Vision reveals that he has experimented in how the virus affects the limbic system of its victims, the system that controls basic survival needs such as eating but is also responsible for emotional responses. He has even had success in reversing the zombie condition by targeting transmissions of Mind Stone energy, as evidenced by Scott Lang’s encapsulated talking head. Okoye reminds the team that Wakanda’s force fields have kept it safe from the zombies and she suggests that they use Wakandan technology to broadcast the stone’s frequency across the globe. 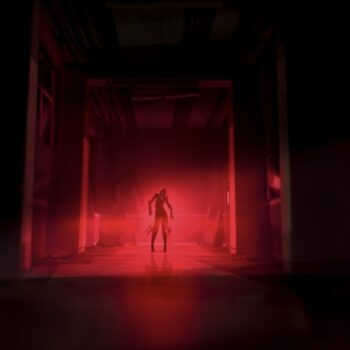 Meanwhile, Bucky wanders into a backroom to discover a captive T’Challa and a zombified Wanda. Turns out Vision has been keeping Wanda alive with human scraps because, even when she’s undead, he can’t bring himself to kill her. Plus, Wanda’s power has blocked Vision from curing her. Bucky and the others begin their rescue of T’Challa and flee an angered Wanda, whose destruction compels Vision to relinquish the stone (killing himself in the process). Bucky, Okoye, and Bruce each sacrifice themselves to ensure that Peter, T’Challa, Scott, and the cape can safely depart for Wakanda with the Mind Stone.

Of course, our heroes are unaware that Wakanda has fallen to Thanos’ zombie army. The last shot zooms in on Zombie Thanos as he closes his Infinity Gauntlet, with the spot for the last stone waiting to be filled.

Time of the Season

We’re at a halfway point in the What If…? series. This episode summarizes the various effects of the multiverse that we’ve seen so far: Heroes becoming even more valiant than before, people giving in to their darkest impulses, and how everyone contains infinite possibilities. Take Thanos, for example, a figure capable of devastating genocide and startling redemption in episode 2. Or Stephen Strange, who has saved the universe and annihilated it. Our decisions have resounding consequences.

This episode also brought a return to the question of love. Previously, both Hank Pym and Stephen Strange have ruined their realities by letting love tear them apart. Love has actually become a recurring theme in Marvel’s Phase 4. First, Wanda fell victim to love’s chaos as her grief persevered, then Loki and Sylvie questioned the very definition of love itself. And now, in this episode, Bruce questions Vision, “You lured innocent people to their deaths. All in the name of love?”

Absolute truths, like Absolute Points, might be rare but when encountered, their profound effects are felt across the universe.

As the episode draws to its close, Uatu observes, “Even in the darkest of times, humans will give all to save their planet. Even if it might bring an end to the universe.” Death exaggerates our innate qualities. It can make people into glorious heroes or grotesque caricatures.

Wanda and Vision risk the safety of the world when faced with losing each other. And Hope becomes the vital embodiment of her name — that is, until she tries to eat the Quinjet. Hey, nobody’s perfect. Bucky and Okoye shine as selfless bright spots while it’s hinted that Thanos’ destruction is even more catastrophic. Maybe zombies were chosen for this episode because, like humans, they are shortsighted. Zombies only hunger for brains just as humans only try to fix their surroundings, rather than look at the bigger, universal picture.

Why do you think it was zombies? Let us know in the comments and don’t forget to Let Your Geek Sideshow!

The Most Noteworthy Upcoming Video Games (2021 and Beyond)