Born on June 5, 1980, Draco Malfoy is one of the most complicated, beloved, and despised characters in J.K. Rowling’s Harry Potter books. Such mixed feelings are expected about a Slytherin, historically the most exclusionary of the four Hogwarts houses, who also happens to be the Pure-blood son of a Death Eater—a follower of the Dark Wizard Voldemort. But Draco is neither a typical villain nor a simple character.

Love or hate him, Draco Malfoy is vital to Harry Potter. He is the protagonist’s foil, Voldemort’s pawn, and, at his core, a young boy who struggles with right and wrong in a world where his family lineage has already decided his fate. To commemorate his struggle, and his 40 magical years of life, let’s take a look at his five best moments throughout the series.

“Well, no one really knows until they get there, do they, but I know I’ll be in Slytherin…”

Harry Potter and Draco Malfoy’s first meeting occurs in Madam Malkin’s Robes for All Occasions, a shop in Diagon Alley where wizards and witches can purchase, among other clothing, their school uniforms. Because of various circumstances, the boys are left without their guardians or parents in the shop. This is probably why Draco forgoes all formalities to just bombard Harry with questions about Hogwarts, Quidditch, and the like.

This is also a crucial glimpse into Draco’s personality. His introduction in the entire series is a moment where he is in a position of power—being waited upon—and making Harry feel inferior, although not quite intentionally. So, is this Draco’s ‘best’ moment? Certainly not. He’s a bully and a brat. But it is the best moment to illustrate how far he comes in the next four sections of this article, and thus it is necessary to include it on the list. 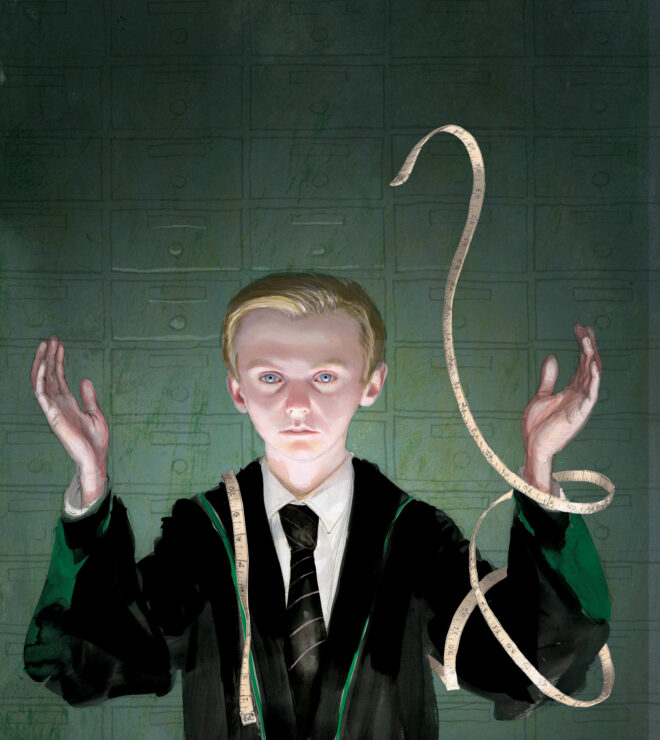 “Malfoy… had taken over Buckbeak. He had bowed to Malfoy, who was now patting his beak…”

-Harry Potter and The Prisoner of Azkaban, p. 117

It’s no secret that Draco isn’t a fan of Rubeus Hagrid. Draco is also very vocal about his disdain for most classes not taught by a Slytherin professor. However, Draco does complete his schoolwork—he excels at Potions—and participates in Care of Magical Creatures despite his sneering and snide remarks.

Draco’s most notable moment in class is his interaction with the hippogriff Buckbeak. In Prisoner of Azkaban, Hagrid’s class is introduced to an entire hippogriff herd and taught the proper etiquette to approach them. Harry has the first go with Buckbeak, bowing and being accepted by the horse-eagle hybrid, and then everyone else breaks off to introduce themselves to each animal. As evidenced by the quote above, Draco respects Buckbeak enough to gain a bow and an amicable interaction.

We all know how this story ends: Draco eventually insults Buckbeak, it’s a massive kerfuffle, there’s an injury. The fact remains that Draco calmly followed directions and only acted out to spite Harry—or gain his attention, since most signs from The Sorcerer’s Stone onward point to Draco desperately wanting Harry as a friend. Draco showed some decency that day, even if only for the briefest moment.

“Along the aisle between the tables [Harry] walked, he spotted the three Malfoys…”

After the Battle of Hogwarts, the winners round up and imprison or subdue remaining Death Eaters. Notably, Lucius, Draco, and Narcissa remain in the Great Hall with the victors. Does Lucius deserve to be there? Absolutely not. But Narcissa and her son took deliberate steps to help the heroes win.

Draco spent a lot of the battle vacillating between sides for his own self-preservation, though he also significantly stopped Crabbe and Goyle from harming Harry in the Room of Requirement. Draco’s place at the table in the end marks an active decision to change his ways, to stand for a better future, and to demonstrate his opposition and separation from those who harmed his peers. 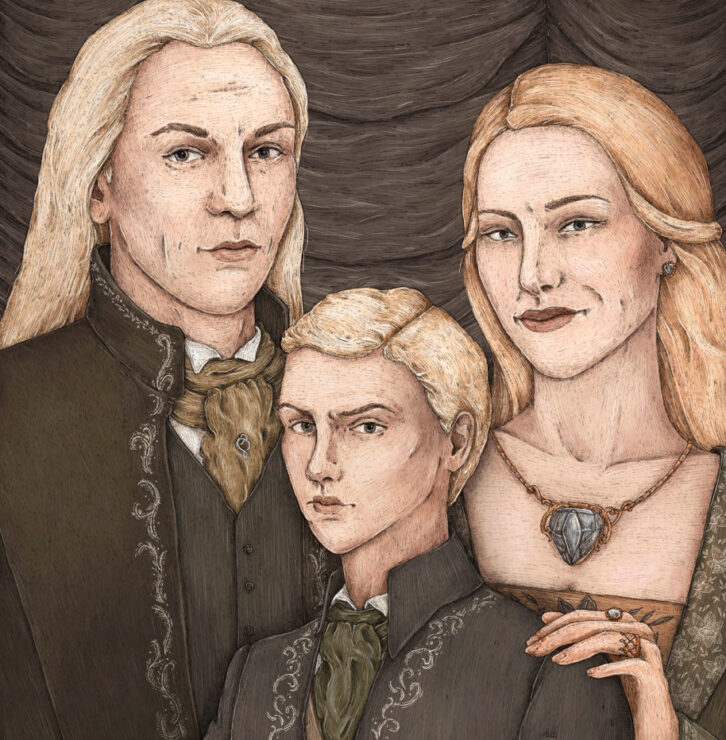 -Harry Potter and The Half Blood Prince, p. 591

Draco Malfoy is not a killer. Narcissa Malfoy makes the Unbreakable Vow—a promise under penalty of death—with Severus Snape in The Half Blood Prince because she knows this, and Albus Dumbledore, working behind the scenes and very much aware of the plot against his life during the sixth book, knows this. While Draco is indoctrinated as a Death Eater, Dumbledore is already dying from a nasty interaction with a Horcrux—a cursed portion of Voldemort’s broken soul. A plan is hatched.

This plan would not have worked if Draco were not a good person at heart.

Up on the Astronomy Tower, Draco disarms his weakened headmaster. He reveals every step he took to get to that point, trying to gloat, to laud his success at this great wizard, but ends up breaking down. Dumbledore sees through the mask to the desperate, anguished sixteen-year-old boy. While talking him down, Dumbledore shows Draco—and the reader—what has been there all along: someone who will choose the right path if given proper guidance.

This Slytherin, this so-called villain, did not murder Albus Dumbledore that night. It was a turning point for him in the series, revealing his status as victim rather than villain, and paving the way for his most selfless deeds yet in the final book.

“Draco’s expression was full of reluctance, even fear. ‘I don’t know,’ he said.”

At Malfoy Manor, a disheveled Lucius Malfoy and crazed Bellatrix Lestrange are so close to redemption if they turn Harry, Ron, and Hermione over to Lord Voldemort. Except, Harry has been hit with a hex that swells his face beyond recognition. That scar is hard to miss, though.

Draco is tasked with identifying his formal schoolmate and answers vaguely, walking away and averting his eyes whenever pressed. Harry knows Draco knows. Draco recognizes Ron and Hermione, too, but continues to avoid the truth because the consequence of saying yes is too severe and too disgusting; if he identifies Harry, Voldemort kills him and wins the war.

With everything to gain and not much left to lose, Draco Malfoy still protects Harry Potter in his most dire hour. Without Draco’s protection, Harry would have died before collecting all the Horcruxes and not been able to bring peace to the wizarding world.

It’s a remarkable scene—one of the best in the series. Draco showed true courage here after almost six books of cowardice. This moment has been dissected by the Harry Potter fandom for decades. It’s perhaps the most complex, and certainly the most important. That’s why it takes the #1 spot on this list.

What do you think of Draco Malfoy? What are your favorite Malfoy moments in the Harry Potter series?

Let us know in the comments, and don’t forget to wish your favorite Slytherin a ‘HAPPEE BIRTHDAE’!

*all images courtesy of Pottermore/Wizarding World