Holy Alphabet, Batman! Every September, Batman Day honors the Caped Crusader along with his brilliant roster of associates, nemeses, and all those who fall in between. Today, September 18, we take flight through the gritty streets of Gotham to explore DC’s well-rounded alphabet mafia.

In March 2021, DC Comics revealed in Infinite Frontier #0 that Alan Scott, the original Green Lantern, is gay. This story was expanded beautifully in DC continuity, including in the DC Pride anthology comic released in June 2021 that highlighted LGBTQ+ heroes such as Alan, Aqualad, Renee Montoya, and many others.

Following this historic announcement, recently in August 2021, DC published Batman: Urban Legends #6. This anthology series highlights various Gotham City heroes. During this standout sixth issue, readers followed Tim Drake AKA the third Robin, a beloved Boy Wonder. And at the end of the Tim Drake: Sum of Our Parts story, Tim agrees to a date with Bernard Dowd. You can view the panel below. Already other longtime members of the Bat-Family, like the bisexual Harper Row (Bluebird), are making waves in terms of amplifying queer voices in Gotham and beyond, so the realization of Tim’s bisexuality is another wonderful step forward for queer representation in comics. To celebrate his coming out, and to celebrate Sideshow’s Batman Day event, let’s take a look at some other iconic queer DC heroes. Two of the infamous Gotham City Sirens, Poison Ivy (Pamela Isley) and Harley Quinn (Harleen Quinzel) are longtime lovers with an extensive comics history. They were often shown as simply close friends, perhaps flirting and complimenting each other but never always canonically official. Instead of letting their story quietly fade or continue to come and go into continuity, DC Comics finally had these girlfriends tie the knot in their 2020 Injustice: Year Zero series.

The two have gone on to be portrayed as a romantic couple in multiple DC projects, from the HBO Max Harley Quinn TV show to the DC Black Label White Knight: Harley Quinn comics. They are one of the most well-known queer couples in comics and will be living their happy-ever-after for years and iterations of themselves to come. The final member of the Gotham City Sirens trio, Catwoman (Selina Kyle), is also bisexual/pansexual. In Catwoman #39, she passes on her catsuit and crime-fighting responsibilities to a woman named Eiko. During an intimate rooftop rendezvous, the two kiss and promise to explore their relationship further … should Selina survive the oncoming war in the Gotham underworld.

While Selina’s most iconic and impactful relationship is still with the Caped Crusader himself, that doesn’t erase her identity, as she’s attracted to more than a single gender. Instead, her coming out was, like Tim’s, a massive win for all LGBTQ+ readers and fans who find inspiration in Catwoman. John Constantine, the slyest of sorcerers, has had a tumultuous road to coming out. Although he declared he dates men and women as far back as the ’90s in Hellblazer #51, his sexuality is often disregarded, hidden, or unmentioned in most instances. Not until 2015 did this paranormal detective have a stable or unproblematic relationship with another man.

His onscreen appearances followed the same pattern of creators saying “Oh, eventually” and then sidelining any confirmation or explicit acknowledgment of Constantine’s queerness. With The CW’s Legends of Tomorrow, a television program touted for its representation on and offscreen, that pattern finally shifted toward actual acceptance.

A metahuman and the wife of Grace Choi, Anissa Pierce (Thunder) is a lesbian both in DC Comics and onscreen in Black Lightning. Like most heroes, she’s selfless, protective, and brave; Anissa is set apart from the rest as one of the only LGBT heroes of color on DC’s roster. In the comics, she is a vital member of the Outsiders team. Onscreen, she was instrumental in freeing metahumans and fought in the War for Freeland. No matter the universe, Anissa is making her mark and doing good. 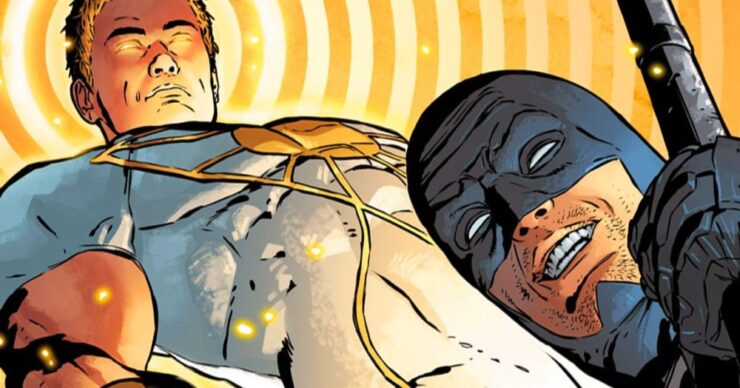 To be quite honest, Midnighter and Apollo are DC’s ultimate power couple. These two gay men are DC’s most prominent same-sex relationship and have been together for years and years within canon continuity. Sure, they’ve had their ups and down, but which superhero couple hasn’t? Still, they’ve endured, and so has readers’ love for their important role in DC Comics queer history.

Their “close friendship” blossomed into a romantic relationship in The Authority #8, where it was revealed the two heroes were in love. They are entirely devoted to one another, and their relationship is taken seriously by both their teammates and DC’s creative teams. Now, Midnighter and Apollo are happily married, as well as a guiding light for portraying gay relationships in comics. Batwoman (Kate Kane) is hands down one of the most important characters in DC Comics’ queer history. Batwoman was first introduced in the ’50s as Kathy Kane, a love interest for ladies man Bruce Wayne whose specific purpose was to distance Batman from rumors of homosexuality. Kathy was a pretty face and not much more, a lovely and pure verification that nothing about DC was deviant.

When she was rebooted, Batwoman became a lesbian and a soldier. She’s powerful, purposeful, and unashamedly present. Her identity cannot be erased, and DC Comics ensured it wouldn’t be, as she is a well-known and completely established queer hero. Nia Nal (Dreamer) was the first transgender superhero on television. She debuted in The CW’s Supergirl as the meticulous and motivated CatCo employee Nia, who was later shown to fight under the alias Dreamer. And although Dreamer was written as an original character only for television, she was given a story in the DC Pride anthology and will hopefully stick around in the comic format outside of the June/Pride Month event.

Who is your favorite queer DC hero? Let us know in the comments, and don’t forget to Let Your Geek Sideshow!