Buffy the Vampire Slayer has risen to the top of the pop culture echelon in recent years. Joss Whedon‘s supernatural series about a young woman who slays demons is considered a cult classic. As if you didn’t feel old already, a show from the ’90s is now categorized as vintage. Buffy the Vampire Slayer paved the way for more genre shows starring strong, multifaceted female protagonists to come to fruition.

Below, I’ve compiled a list of my personal top 10 episodes of Buffy the Vampire Slayer. Why? Because quarantine is still in effect and I currently have limitless time at my disposal. Peruse at your peril, Scoobies.

SPOILER WARNING (if you haven’t watched this 20+ year old series.)

“Once More, With Feeling” set the stage for future genre series showcasing musical episodes. This is, hands down, my favorite musical episode of any show. Whedon managed to seamlessly integrate the episode’s arc with original music.

While nowadays it’s not uncommon for series to utilize already established songs, “Once More, With Feeling” featured an original score with the actors actually singing. No overabundance of autotune. Just pure, raw performances that mesh well with the overall story. In addition, this episode had a tap dancing demon. Enough said.

While Season 4 of Buffy the Vampire Slayer isn’t one of my favorites (it’s just ahead of Season 1 for me), there are fantastic standalone installments like “Hush.” Everyone in Sunnydale lost their ability to speak, so the Scooby gang had to vanquish the formidable demons who absconded with their voices like Ursula did with Ariel’s in The Little Mermaid.

Of course, as an actor, you expect to be memorizing a script chock full of dialogue. However, “Hush” shows us just how talented the cast of Buffy the Vampire Slayer is while not a single word was uttered. To this day, the Gentlemen still frighten me and the pervasive silence in this episode makes them all the more unnerving. 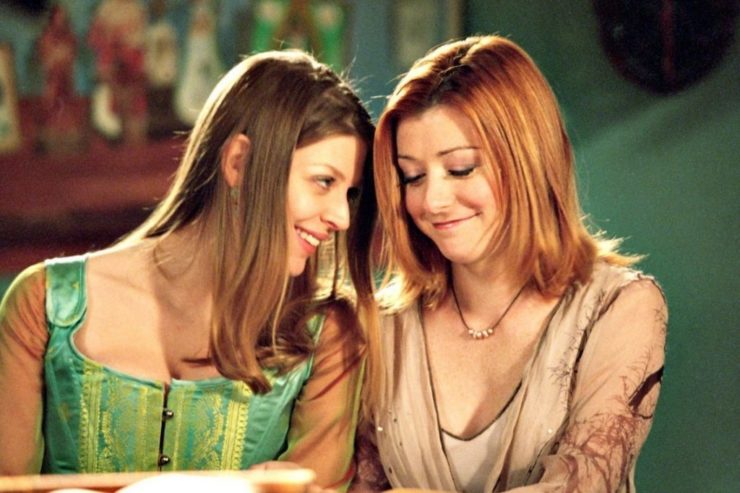 “The Body” is a masterpiece. There, I said it. Much like “Hush,” Whedon chose to eliminate the sound factor in this episode. While everyone could talk, not a single song played in the background. When Buffy discovered her lifeless mother, there’s no music. Not a sound. I distinctly recall when I watched this episode for the first time. My heart dropped. I felt everything Buffy was feeling. When Buffy silently moved to the next room and vomited after finding Joyce Summers on the floor of her home.

I can still picture that scene in my head – almost 20 years later. This is an episode that’ll stick with you. I think the fact that Joyce died of natural causes amid a show rife with supernatural deaths is what resonated with me the most. The fragility and mortality of humankind. Not to mention, Anya’s monologue about not understanding why Joyce is dead just broke me. What a gut punch coupled with a vulnerable performance from Emma Caulfield.

Oh, my poor Giles! “Passion” proffered the unfortunate demise of Jenny Calendar at the hands of a soulless Angelus. She was the love of Giles’ life! And if anyone hurts Rupert Giles, they hurt me. Anyway, “Passion” marked a point of no return for Angel.

He lost his soul when he experienced a moment of true bliss with Buffy. Brutally murdering Giles’ beau acted as the catalyst for Buffy defeating Angel at the end of Season 2. Of course, battling your lover after he takes a villainous turn is not something you expect to do while in high school.

To me, this is one of those episodes that epitomizes what Buffy is all about. Whimsy, clever one-liners, and vampires. All wrapped up in a quintessentially ’90s bow. 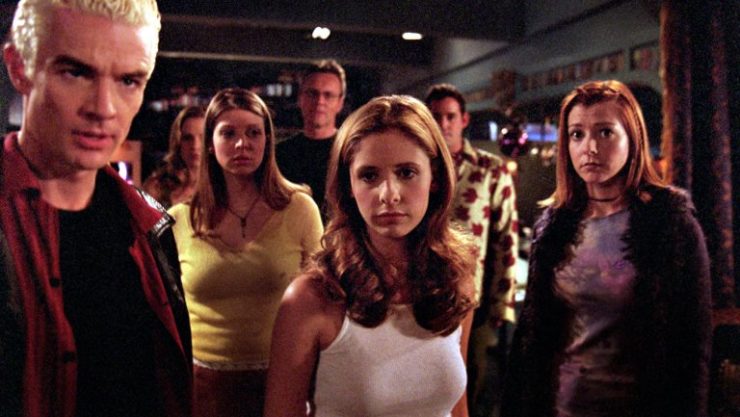 “The Gift” came about when Whedon was uncertain if the Powers That Be would renew Buffy the Vampire Slayer for a sixth season. Hence why this episode felt more like a series finale as opposed to a season finale. Thankfully, the show continued on for two more seasons. Glory is my favorite villain of the series and her fabulously cheeky villainy was on full display in “The Gift.”

While Dawn Summers is not my favorite character from the show, Buffy’s willingness to save her little sister is the essence of true love. Of course, Buffy stopped Glory from sacrificing her sister and in turn saved the world from a bottomless pit of hellfire. Buffy jumping to her death rang with finality. In supernatural shows it’s not unusual for main characters to die and be revived. Sometimes more than once. However, Buffy’s grand gesture felt final. That is, until the show found a way to resurrect her in Season 6.

It’s all about William the Bloody! I’m a loyal Spike gal, so “Fool for Love” was a treat for me. We learned all about Spike when he used to rule the roost with Drusilla, Angel, and Darla centuries prior. In addition, we discovered how Spike killed two Slayers. That Spike, a.k.a. William, was a big ol’ softie before he was turned into a vampire. He also wrote poetry and received mockery for it.

Of course, I loved seeing my favorite vampire girls Darla and Drusilla make guest appearances. If only Whedon had the wherewithal to produce a spin-off featuring the core four Buffyverse vampires…if only. I’d watch that in a heartbeat.

“Tabula Rasa” is one of the many highlights from a stellar Season 6. Amid watching Buffy grapple with depression and pining for the afterlife, Willow cast a spell that inadvertently erased everyone’s memories.

It was fun watching the Scooby gang interact with each other while bereft of the experiences they shared together. “Tabula Rasa” is another prime example of Whedon’s unending creativity and boundless magic. 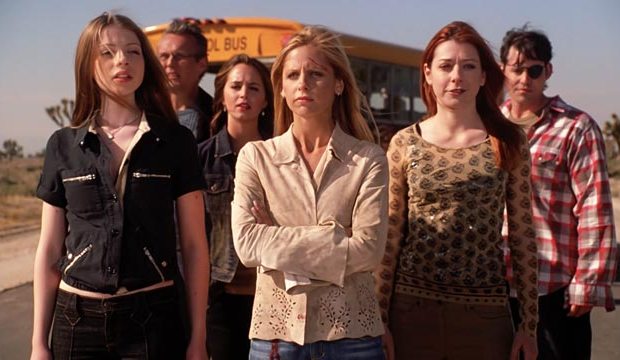 “Conversations with Dead People” introduced us to Holden Webster, an acquaintance of Buffy’s from high school. Holden is now a vampire – one that Buffy was attempting to slay in the cemetery. They struck up a conversation which took a turn for the existential. It felt like an “in summation” paragraph of an essay, encapsulating who Buffy Summers is and what the show is about.

In addition, we saw the rest of the gang struggling to keep the First at bay, which is essentially a compilation of several people/entities that Buffy encountered throughout the tenure of the series. “Conversations with Dead People” is thought-provoking, and it delves deep into the heart of Buffy.

Bring on the Spuffy! Yes, I prefer Buffy with Spike over Angel and this episode was a precursor to that, ahem, steamy scene in Season 6. “Something Blue” is a pinnacle of Whedon’s trademark quick wit. Willow cast a faulty spell wherein every statement she made became reality.

We were also blessed with plenty of hysterical Spike moments. Remember when he was chained in the bathtub drinking pig’s blood from a “Kiss the Librarian” mug? Classic Spike-being-foiled-by-the-Scooby-gang!

Well, that’s all I wrote. What are your favorite Buffy the Vampire Slayer episodes? Sound off in the comments below!