Every summer, the mutants gather to celebrate their nation of Krakoa and show off a little bit of X-gene culture. Last year, the mutant fashion on display was like nothing comics readers had ever seen before. At this year’s second annual Hellfire Gala, a new X-Men team was also announced, welcoming back Synch, Cyclops, and Jean Grey while introducing Magik, Forge, Havok, Iceman, and Firestar to the main lineup.

The gala was attended by plenty of mutant allies like Spider-Man and the Avengers (plus a Jon Hamm cameo!), and more than enough enemies. Fashion notice to Moira MacTaggert: It’s poor taste to possess others’ bodies. Get your own.

As the mutants prepare for Judgment Day in the ongoing Marvel comics crossover event AXE, let’s walk the Krakoan carpet with the stars of the night. Outfit wins will receive an X while outfit misses will receive an AXE.

Disclaimer: All Russell Dauterman designs for this year are out of this world, so critique is reserved for how the outfit relates to the character’s position/powers and their presence at the Gala. 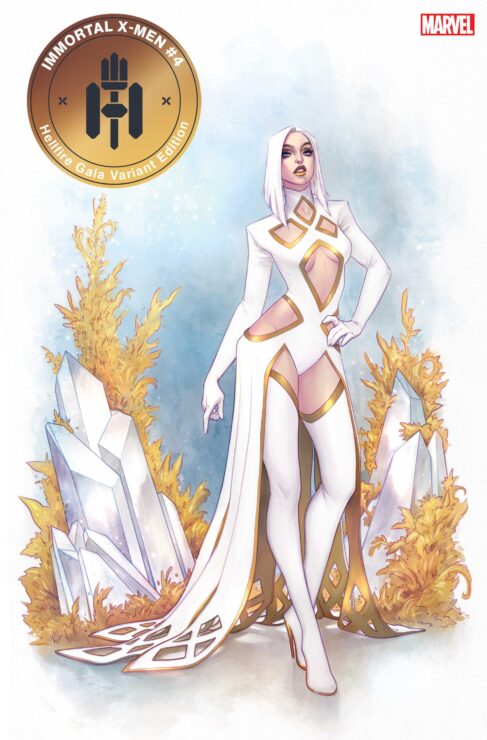 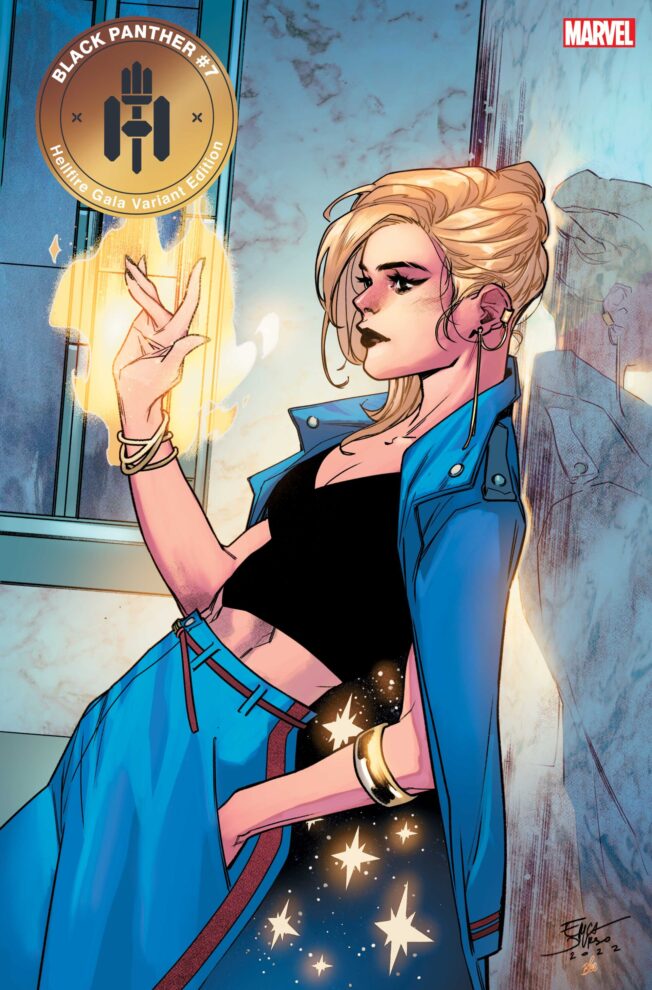 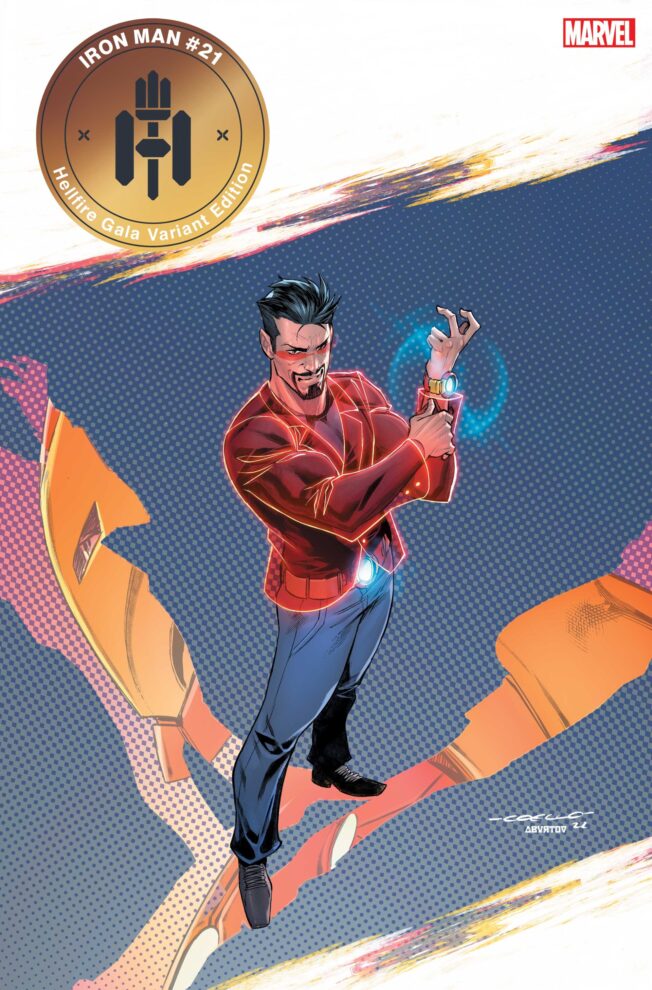 These two, on the other hand. Listen. Both look great … for a casual get together. Carol’s star-lined jacket interior is dazzling and Tony’s red hologram jacket is pretty cool but like, it’s a gala. That means you dress up, not down. 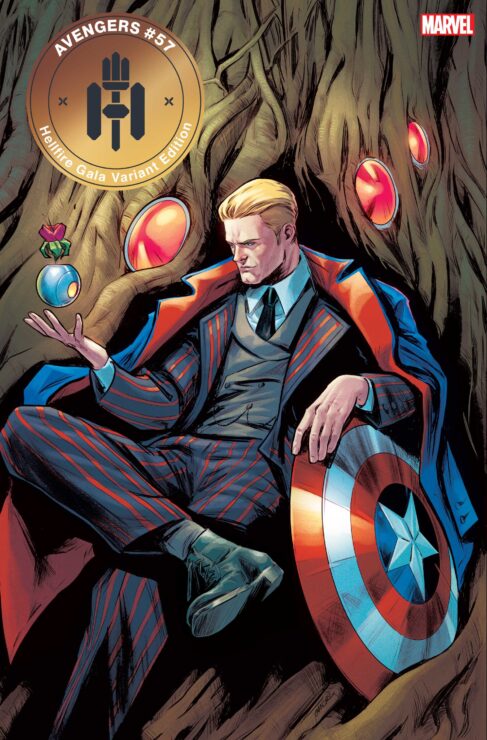 Fortunately, the Avengers are also represented by Steve Rogers. His pinstripe suit not only uses the hero’s signature colors but it also harkens back to his old-timey roots in a retro cool way. Too bad Steve and Tony had to be all shady with Firestar. 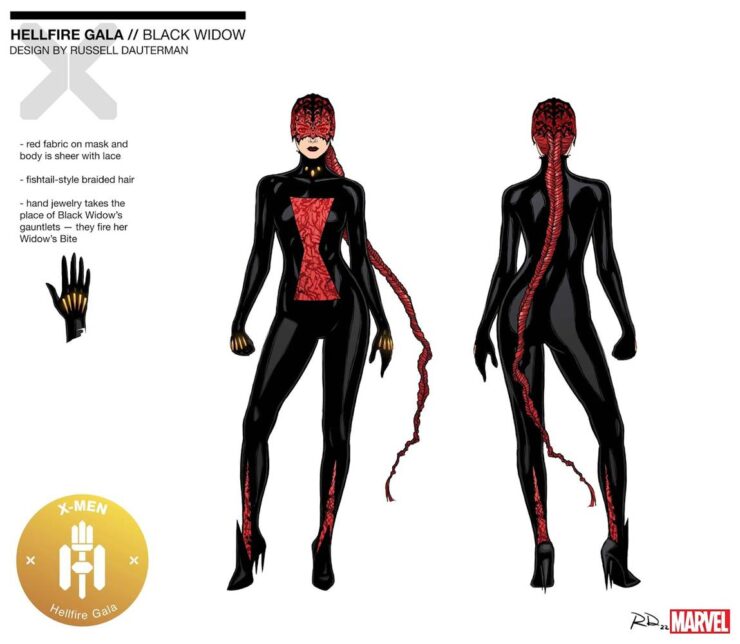 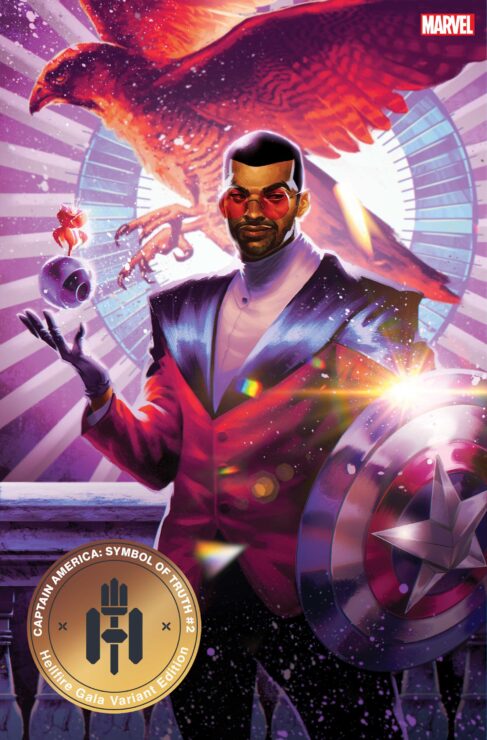 Captain America looks totally sharp. That suit accents his broad shoulders just right and the shield and shades are how accessories should be done. Not a wing in sight because this hero soars all on his own. 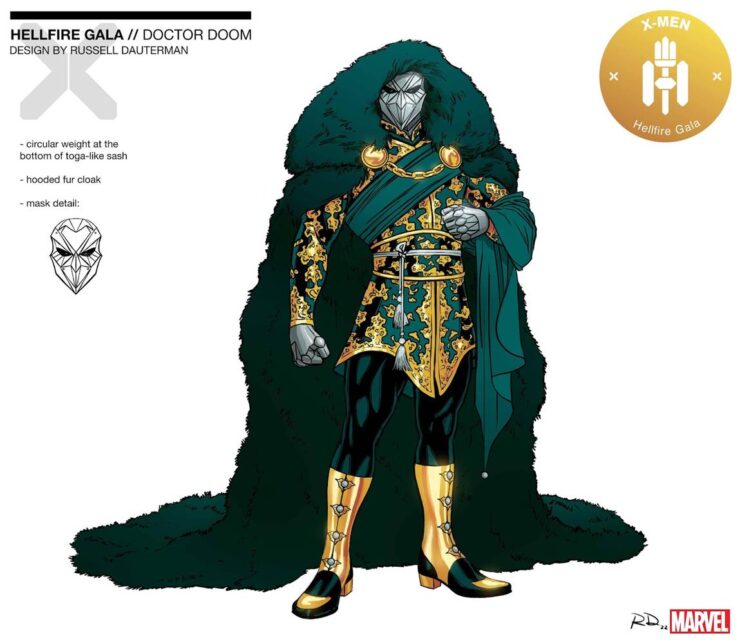 Doctor Doom’s imperial regalia is ornate and you know those deep verdant hues are so velvety soft. However, his terrifyingly sculpted mask lets you know you can look but don’t touch. 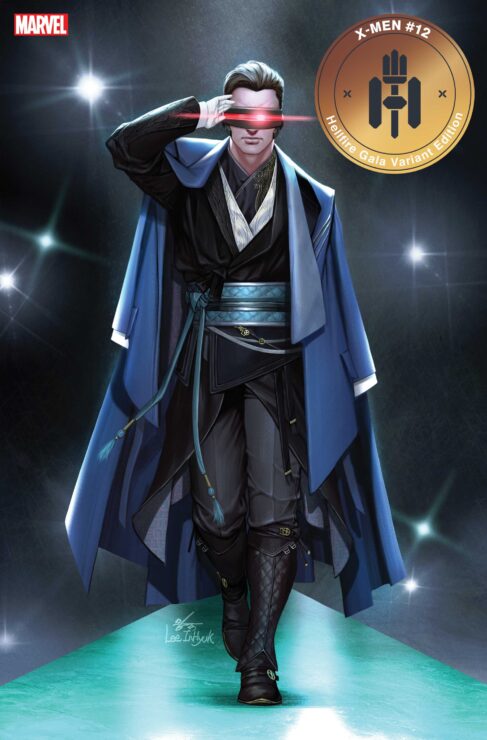 Cyclops, buddy, we know you’re tryin’ but this outfit honestly seems like something more fitting of a knight in a galaxy that’s pretty far away rather than a leader of mutants. Better luck next year? 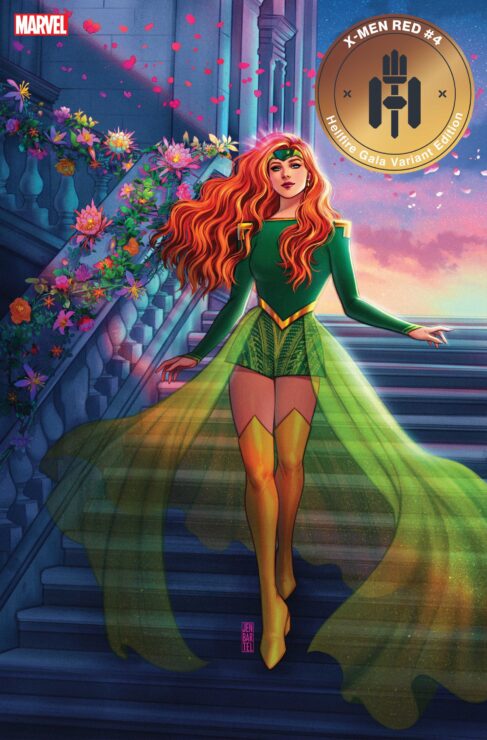 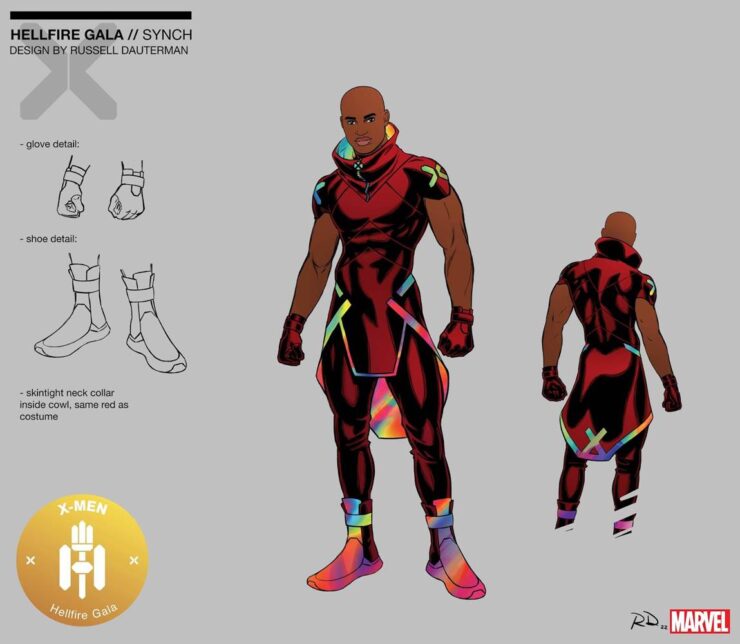 Synch’s Hellfire outfit is an excellent allusion not only to his powers, holding true to the rainbow aura he’s known for, but also to his deep allegiance to the X-Men. The dominating red connects him to both Cyclop’s visor and Jean’s iconic hair. 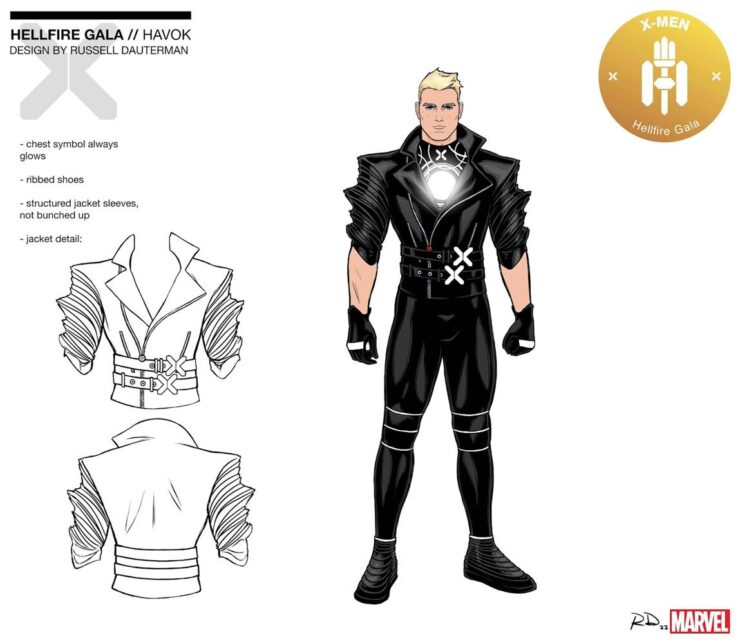 Somebody really needs to cut the Summers brothers some slack. Can we get Jumbo Carnation on the phone? Alex Summers’ outfit isn’t bad at all. It’s definitely a refined version of his classic Havok costume. However, it isn’t quite showstopping like a new member of the X-Men should be. 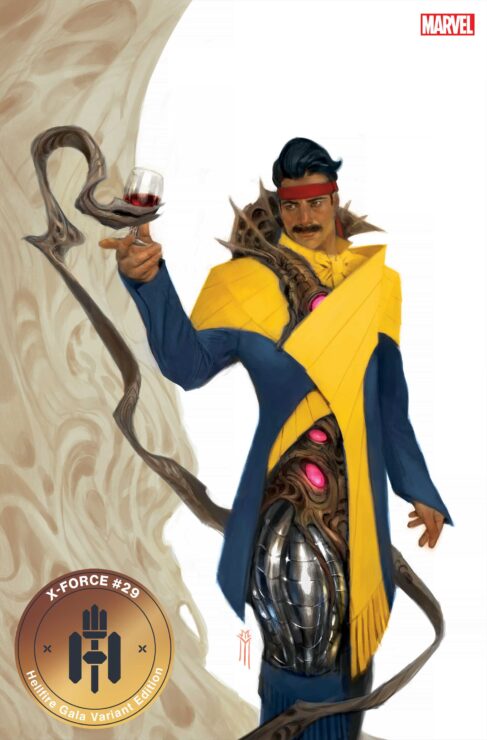 Now here’s somebody who knew how to update his classic uniform. Forge utilizes the signature blue and yellow of his X-Men costume but the shape is revitalized into a sweeping over the shoulder poncho with an upturned cowl as well as the integration of Krakoan tech. 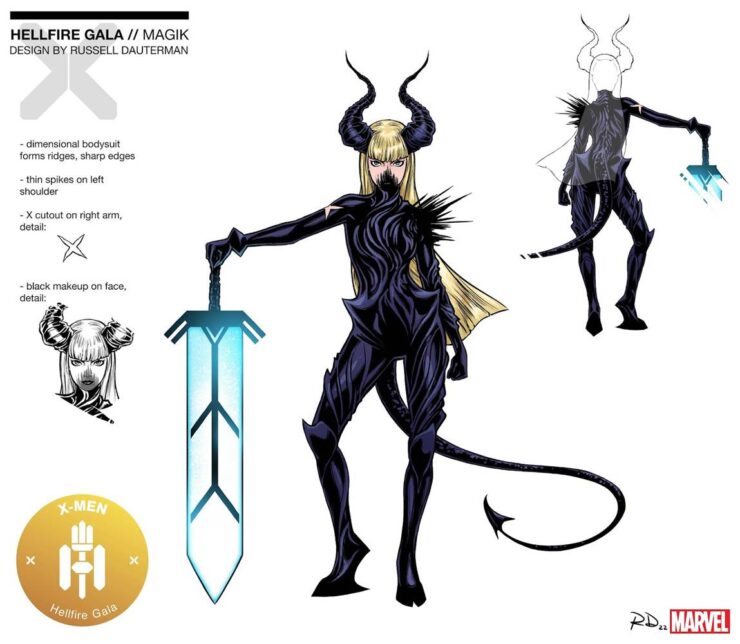 Likewise, Magik looked back to her beginnings for a devilishly good Hellfire outfit. The black spiked armor, horns, and tail all point to the empowering journey Magik has completed in accepting her broken pieces and reconciling her past in Limbo. 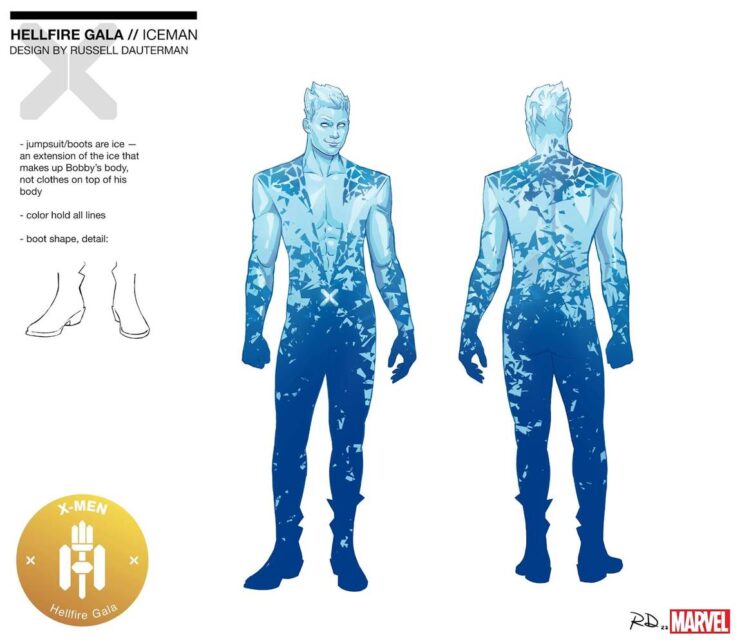 Sometimes, simple is better — especially for somebody like Bobby Drake, who’s known to be a little over the top. His sleek, icy suit has clean lines and a shimmering pattern that show off a captivating control of his element. 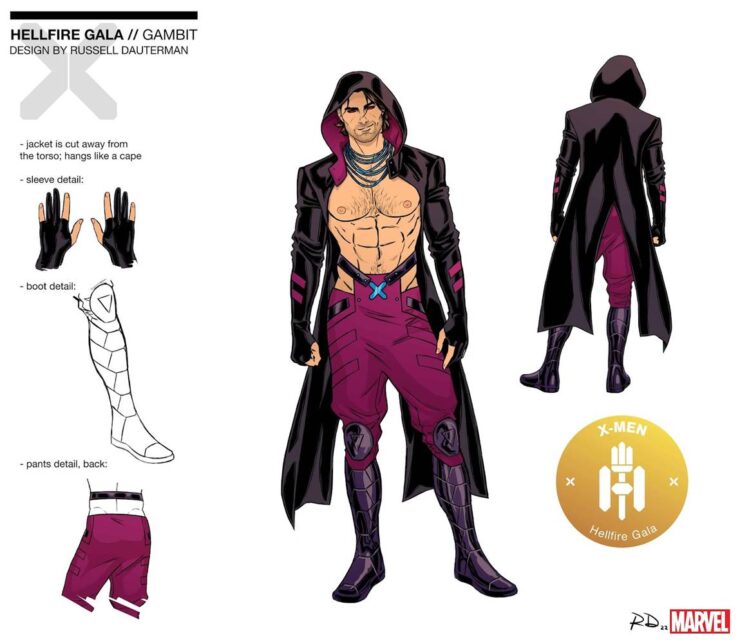 Is it hot in here, or… Gambit’s Hellfire outfit this year uses the magenta and brown cloak he’s most associated with but it also turns the heat up with an open chest and upturned hood. Mon cher, this is a kinetic hit. 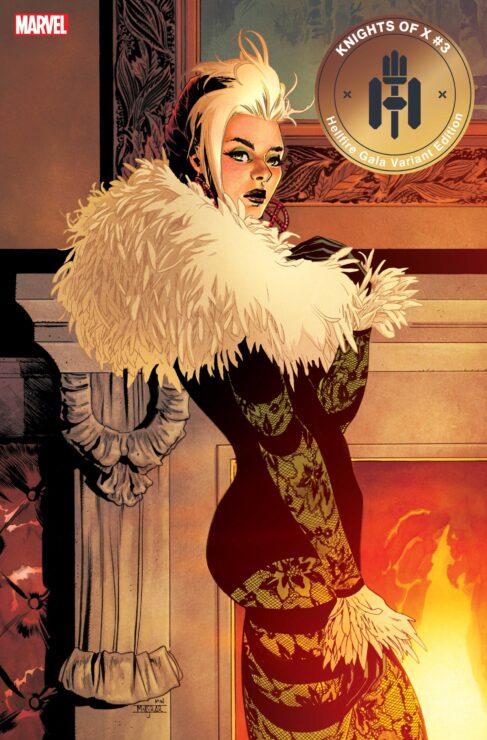 Rogue’s sultry Hellfire gala gown is exquisite. The black and green lace, with white accents, use her trademark colors, especially in a way that evokes her original villainous outfit. The extravagant plumage also calls back to her mother Mystique’s gown from last year — an apt connection that might foretell the future. Oh great, there’s Destiny now! 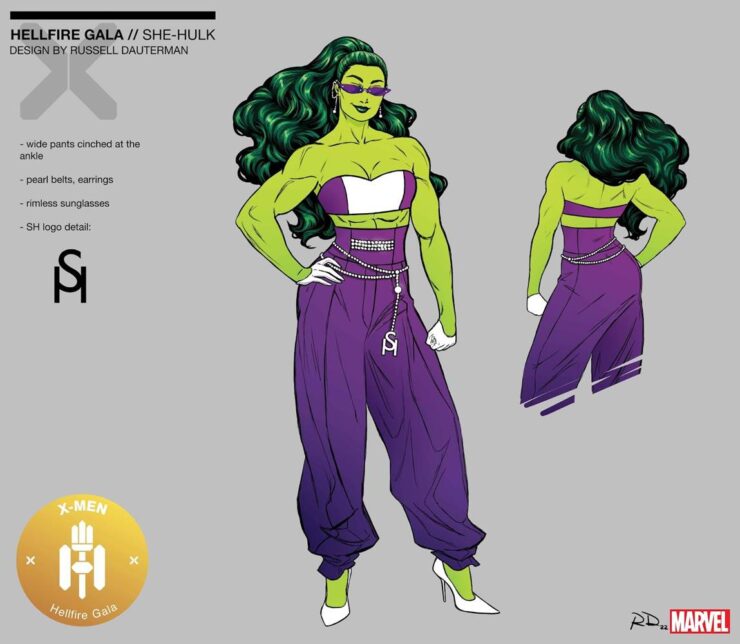 Jennifer Walters’ Hellfire look is what Carol wished she could have done — effortlessly chic while still playing it cool. She-Hulk’s skin and hair beautifully pop against the purple and white clothing, and her parachute pants are a fun nod to early costumes. Plus, you know she had to bring out the arms. It’s not leg day. 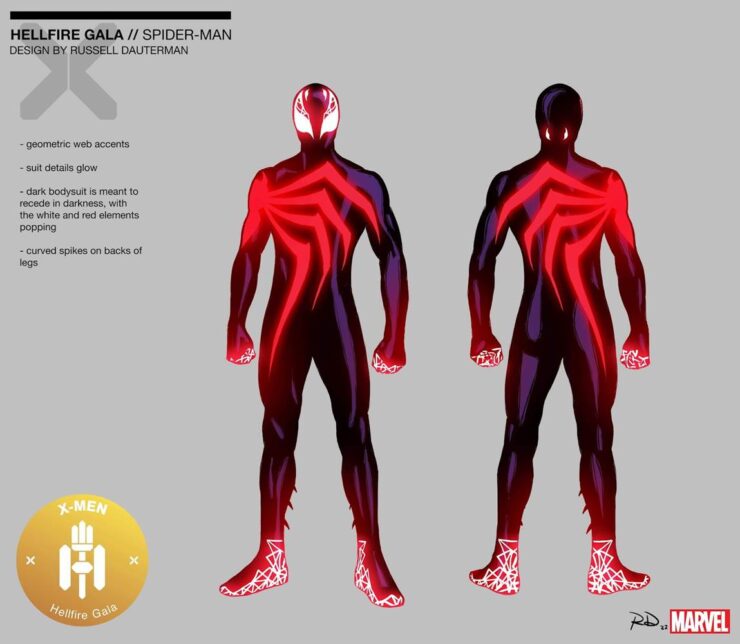 Courtesy of Jumbo Carnation, Spider-Man’s Hellfire outfit suits him very well — the glowing red evokes Spider-Man 2099. And those kicks with the spider webbing are a nice touch. 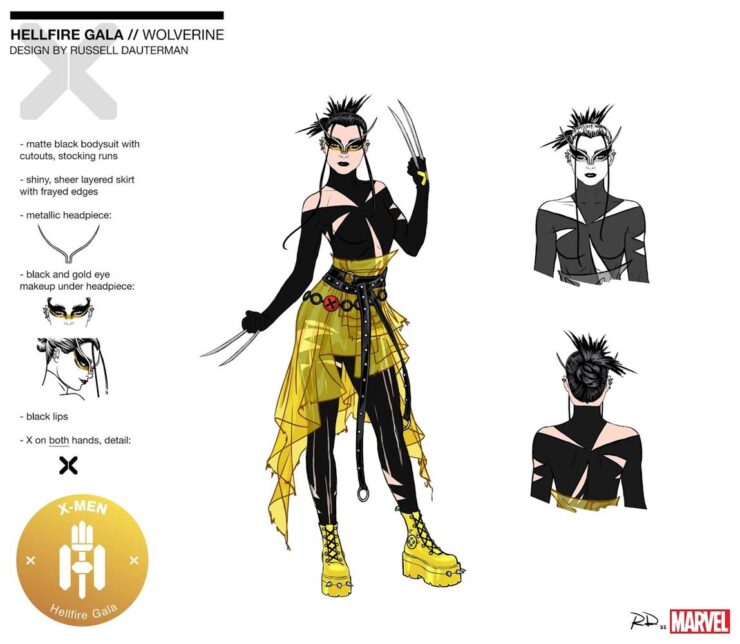 Laura Kinney’s look this year is the perfect mix of punk and couture, which fits her personality. The black and yellow connect her to her father’s legacy, as does her headpiece, while the attitude is uniquely hers. 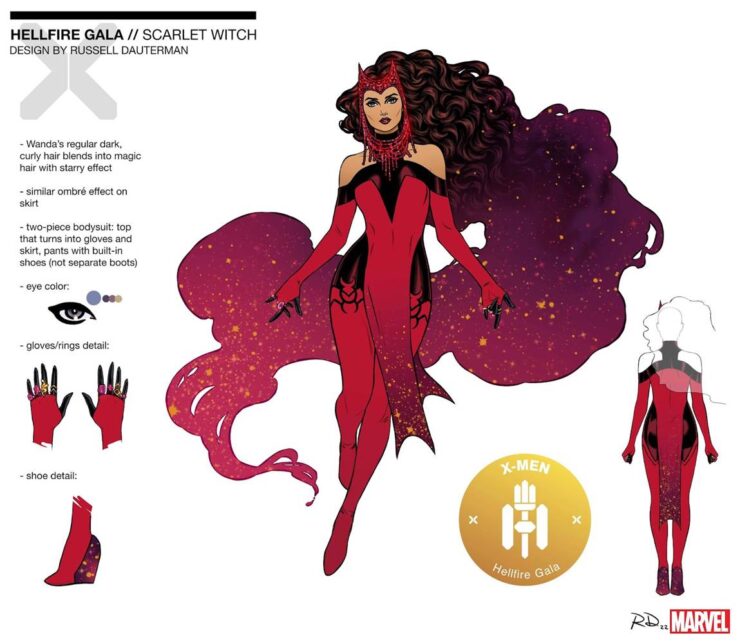 No longer known as the Great Pretender but instead The Redeemer, Scarlet Witch’s outfit this year pays stunning tribute to her Romani ancestry. Plus, her starry trailing hair looks very similar to her son Wiccan’s cosmic cape. The only slay happening this year is this look.

This year’s Hellfire Gala certainly brought the drama — as it should. Honorable mentions on the sartorial selections: Polaris in her Malice-inspired purple bodice and green ruffles, Bishop looking handsome as ever, as well as Mister Sinister looking absolutely divine with his scepter and corona headpiece (and those heels).

What do you think the mutants have in store for them as the AXE event progresses Keep the conversation going with other X-Men fans over at side.show/geekgroup, and don’t forget to Let Your Geek Sideshow! 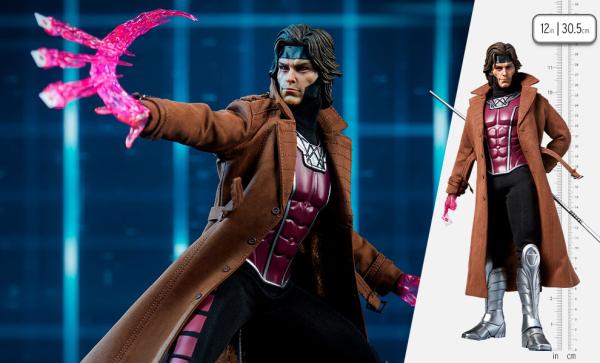 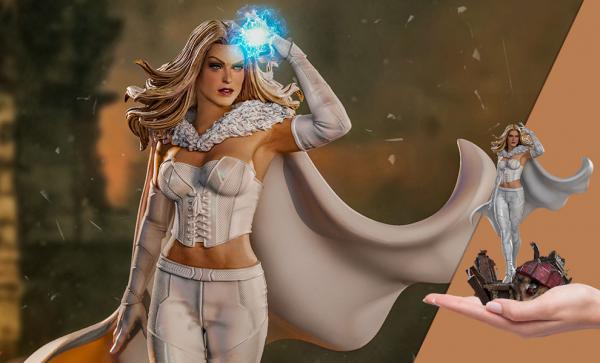 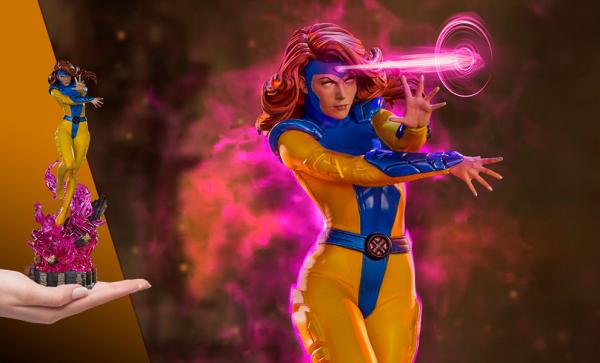 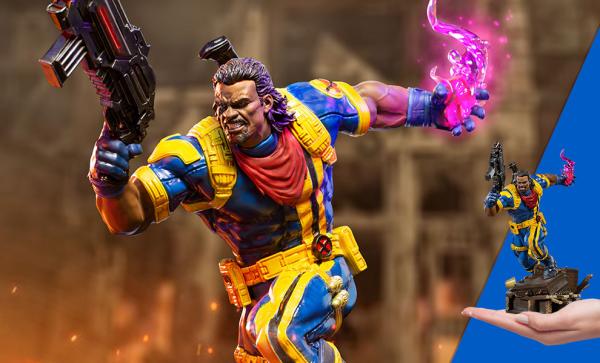