All media, from film to television to theater, is organized into genres. These categories help us sort through all the options out there, and they give us parameters for discussion. As we enter spooky season, horror inevitably becomes even more popular. Horror can be subcategorized, of course, split even further into psychological horror or monster horror, defined by level of gore or types of creatures, et cetera. Even behind covered eyes, we can’t help but take a second look.

Fear and disgust are among the strongest emotions. But, as we know from our favorite comedies, laughter is powerful as well. So what happens when we mix the two?

This brings us to the horror-comedy, defined as a crossover between the two genres that often utilizes dark or gallows humor and parody. Think of The Cabin In The Woods, The Addams Family, and Shaun of the Dead. Yet the line between being a horror-comedy versus being just one or the other can be difficult to draw considering the amount of jokes littered between the screams, or the physical pain that comedic characters endure for a few good laughs. To help us distinguish these, as well as to explore why we love that nebulous distinction so much, let’s look at some of the best and most popular examples of comedic horror and horror-comedy movies.

*BEWARE! There will be references and images in this article including (but not limited to): clowns, blood, death, and violence. 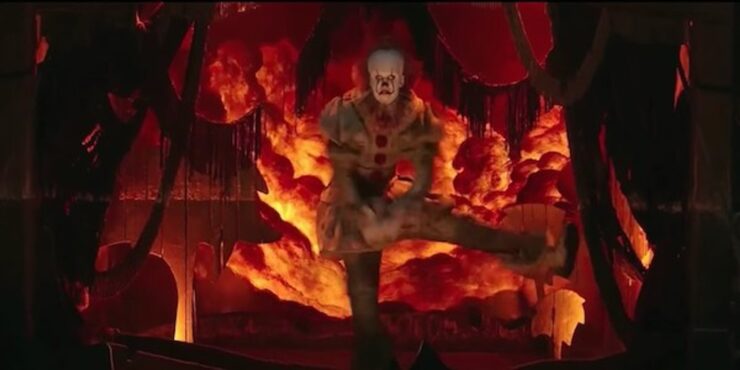 Okay, It is maybe more horror than comedy. But there are plenty of purposefully comedic elements in this franchise. The mere concept for the villain Pennywise, for example, touches on the idea that clowns are supposed to be fun and funny, but most children and even many adults are terrified of these performers — a fear called coulrophobia. Multiple characters play the comedic relief role, such as the hypochondriac Eddie Kaspbrak to Richie “Trashmouth” Tozier.

For the purposes of this article, we’re going to look specifically at It: Chapter Two (2019) and how genuinely hilarious it is. The jump-scare to joke ratio legitimately has the latter in the lead. Whether you enjoyed this element or not, most of the emotional moments are undercut by a quip or sarcastic remark. Now, the screenplay doesn’t allow for the most seamless transitions between the two styles, but if you like a little camp in your horror movie night, It works.

The Losers Club blunders through their feelings for each other, trip over the set, and literally diss a clown to death. In the most intense action sequence of the film, the actual boss fight, Richie tells Pennywise, “Wanna play truth or dare? Here’s a truth: You’re a sloppy bitch!” before tossing a rock at the killer clown’s engorged head. Even Pennywise’s transformations are so over the top they become silly instead of scary; take his double-jointed dancing persona, his long red wig, or even his jack-in-the-box bit and you’ll be crying from laughter, not fear. 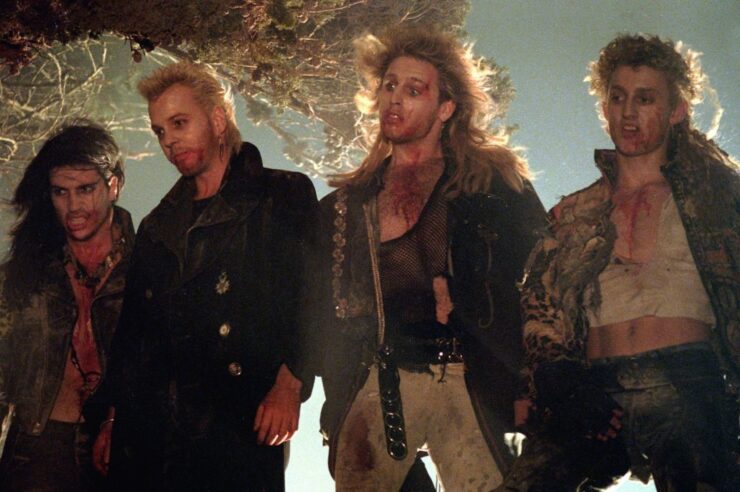 The characteristics of comedy tell us that the story must show the audience a way of looking at the world in which basic values are asserted but natural laws are suspended. Doesn’t this sound a lot like a realistic horror film, where perhaps the environment and human interactions are the same as ours, yet there’s monsters milling about, too? That’s where our next film comes in.

Although billed as a horror film, The Lost Boys (1987) absolutely comes across as a comedy, too. Perhaps it’s simply a product of its time; the late ’80s film capitalizes on the cheesy effects and fashion of the time while foreshadowing that punky, grungy aesthetic of the ’90s and its mega-macho boys that you can’t help but laugh at. Full of heart, The Lost Boys delivers a slice of life coming-of-age drama with endearing brother dynamics, metacommentary about the horror genre, and, oh yeah, a bleach-blond Kiefer Sutherland.

If the premise alone doesn’t convince you of its subverted genre expectations, there’s an eccentric grandpa plus two kids who run a comic shop and are convinced they’re the world’s greatest vampire hunters. The script is full of witty one-liners, or longer lines delivered with incredible comedic talent. When the protagonist’s little brother finds out his big bro is a vampire, his reaction is hilarious: “You wait ’till mom finds out, buddy!” he yells as he retreats to his bedroom … in the same house as his bloodsucking brother. Give this quirky ’80s hit a try — maybe skip the noodles, though. 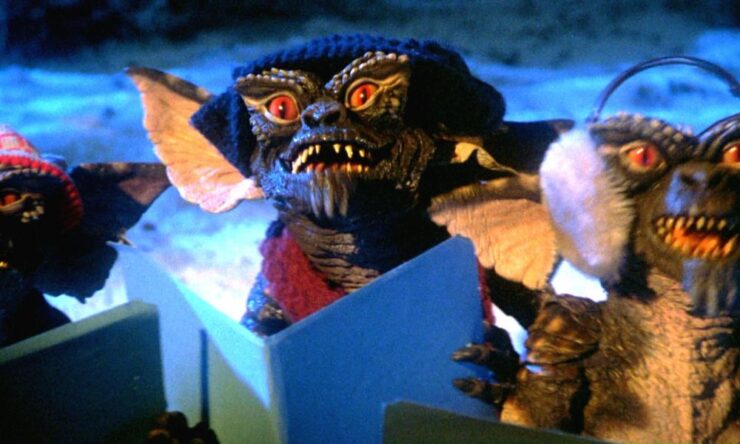 If horror and comedy are two sides of the same coin, Gremlins (1984) chews up that coin  — after midnight, obviously — and spits it out into the messy amalgamation of the genres that becomes this pinnacle example of horror-comedy. Set during Christmas time, the film tells its audience to get into the holiday spirit and welcome the season’s magic. And then it gives us cute creatures called mogwai, introducing the adorable Gizmo à la a puppy on Christmas morning.

And then it makes scary, scaled, horrid little green beasties called gremlins that murder people. If you haven’t seen Gremlins, it’s almost indescribable, and certainly sounds insane. These gremlins terrorize an entire town in ways that could be either very funny or very upsetting, depending on your degree of empathy. Watching Gremlins is like watching a bunch of anthropomorphic animals wreak havoc, and also watching them explode or burn to a crisp. There’s a lot of family in Gremlins, but this comedy is flooded with so much horror that you should probably think twice about showing your kids — lest they have a killer fuzzball of their own and need to learn the three rules. 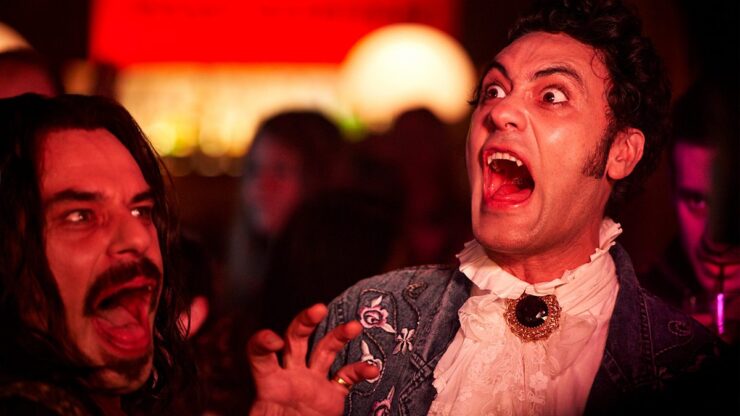 What We Do In The Shadows (2014) is a New Zealand mockumentary. For those unfamiliar with the form, the film is done like a documentary but follows fictional characters instead of real people. The realistic approach allows for clever satirization of subjects and ideas, and What We Do In The Shadows spices up this comedy subcategory further by adding vampires.

The film follows a group of ridiculous vamps and the occasional werewolf as they navigate the modern world. They’ve let a camera crew into their home and chaos ensues not long after. And really, this movie is mostly comedy, and only veers into horror because of the corpses, over-the-top blood sprays, and supernatural shenanigans. Beneath the lace and lasciviousness, however, are friends and flatmates with their own set of issues, such as unwashed dishes and bloodstained carpets, that make for even funnier dynamics as well as true hissy fits.

What We Do In The Shadows is so well adored that it inspired a spin-off television series by the same name, proving like so many horror-comedies before it that teeth are good for both smiling and biting. 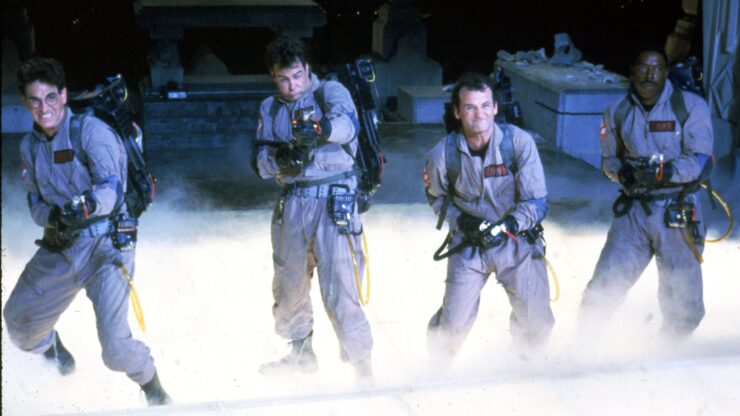 Who you gonna call? Ghostbusters‘ (1984) movie monsters are all, well, ghosts. While this film dips its toes more into fantasy than horror, it’s one of the most famous horror-comedies on this list. It follows Peter Venkman, Raymond Stantz, Egon Spengler, and Winston Zeddemore as they attempt to eradicate phantoms from New York City. While you might expect a chill-inducing haunting, abandoned buildings, and scary stories about the Big Apple, Ghostbusters instead introduces us to raunchy ghouls and a giant Stay Puft Marshmallow Man.

This ’80s flick is so well loved because of its genre mixing. Refusing to play by the rules of horror, it turns its monsters, while still gross or slimy or spooky, into things to point and laugh at. The guys are nerds with clashing personalities who have to figure each other out. Sometimes they’re incompetent. Mostly they make sex jokes. But the horror elements are never overshadowed by the constant humor — because screams of enjoyment are often indistinguishable from screams of delighted terror. 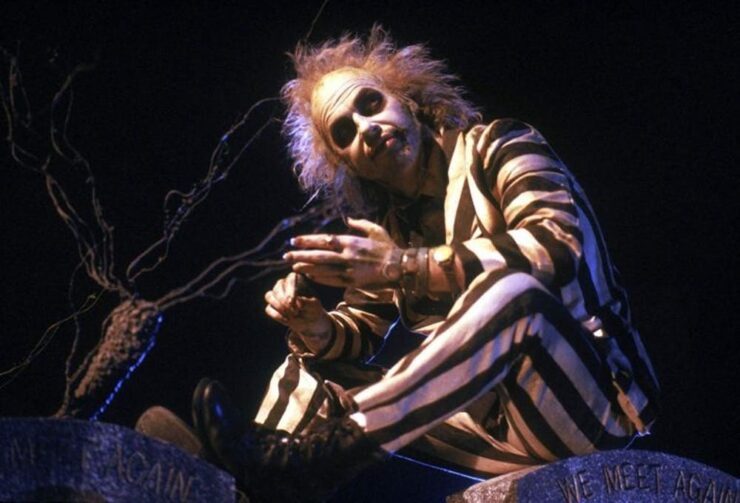 And yet Beetlejuice is thoroughly a comedy. Every character’s personality is exaggerated. Problems are solved by making more problems, and like with all comedies, we are meant to look down upon these people, not look up to them or think they always deserve saving. The color palette of the film is insane, full of vibrant and neon hair, makeup, costumes, and sets that reject your typical horror set drenched in darkness. So we love the safety of this scary story the same way we love the flashlight under our friend’s chin as we sit around a campfire.

Ultimately, we love mixing horror and comedy because of the tension. Horror makes us hold our breath, tighten up, hit fit or flight. Comedy builds tension, too, with the setup for a joke that usually — hopefully — ends in side-splitting giggles. When we meld the two genres together, we have the tension from a scary scene that is softened or enhanced by a relieved burst of laughter. Horror-comedies give us permission to laugh at our fears.

What’s your favorite horror-comedy film? Let us know in the comments, and don’t forget to Let Your Geek Sideshow!

The Best Moments of Marvel's What If...?