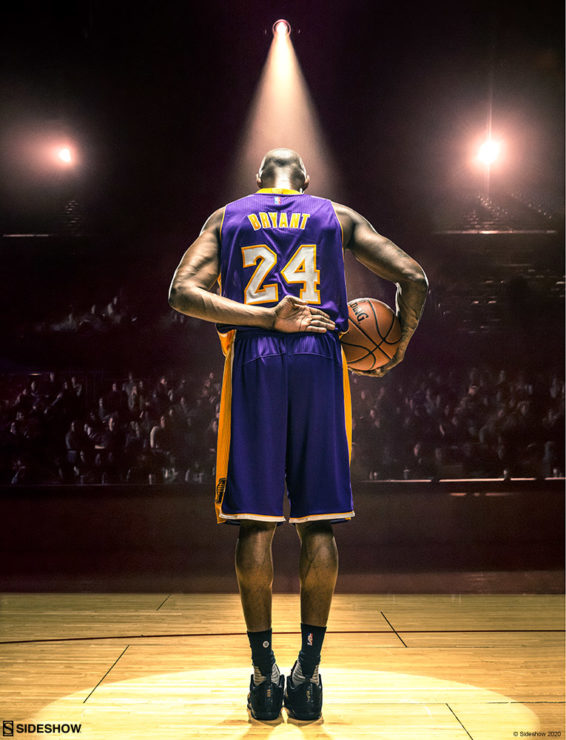 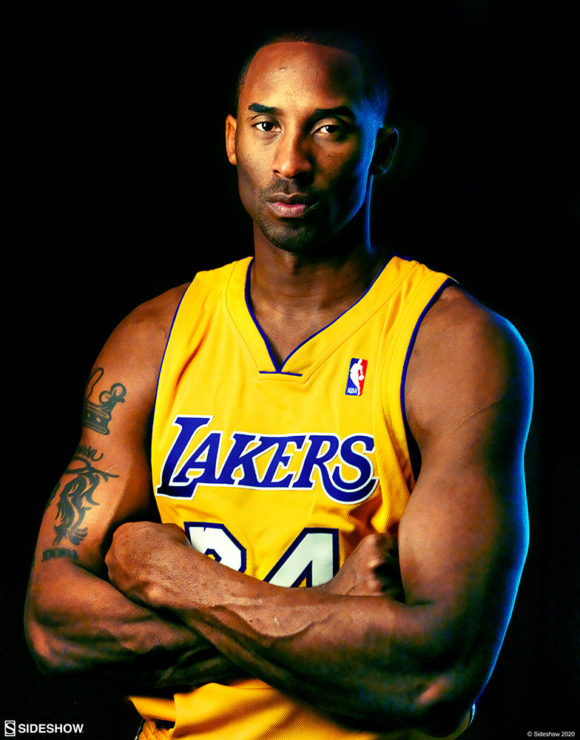 Sideshow is honored to collaborate with award-winning photographer, Michael Muller on a series of commemorative Fine Art Prints – The Final Bow and 24 – honoring the memory of NBA legend Kobe Bryant.

Michael Muller is a world-renowned photographer known not only for his stunning celebrity portraits and incredible movie posters, but also his pioneering work in the realm of underwater wildlife photography.

Michael photographed Kobe several times throughout his career, and they bonded over their mutual love of sharks. Muller’s underwater photography – which involves using a patented seven-bulb 1200 watt lighting rig and other innovative technologies to capture images of sharks – caught Kobe’s eye. Their shared fascination with these incredible animals grew into a budding friendship which enabled Muller to take what are possibly some of the most iconic images of the NBA star. 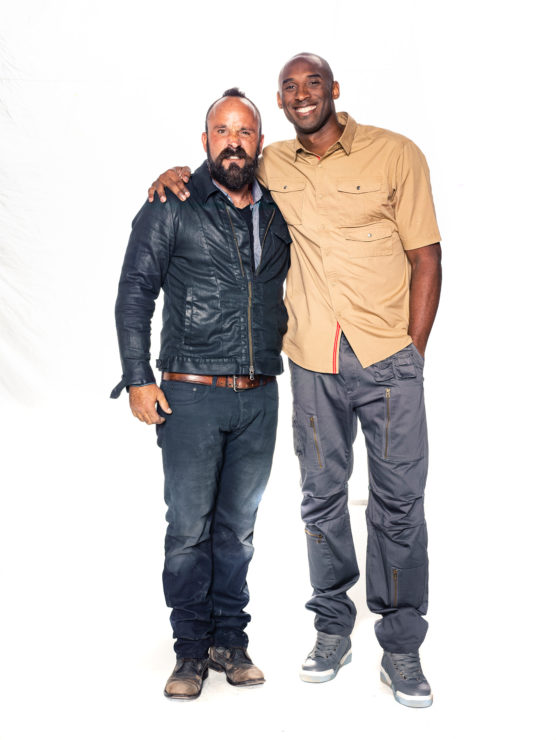 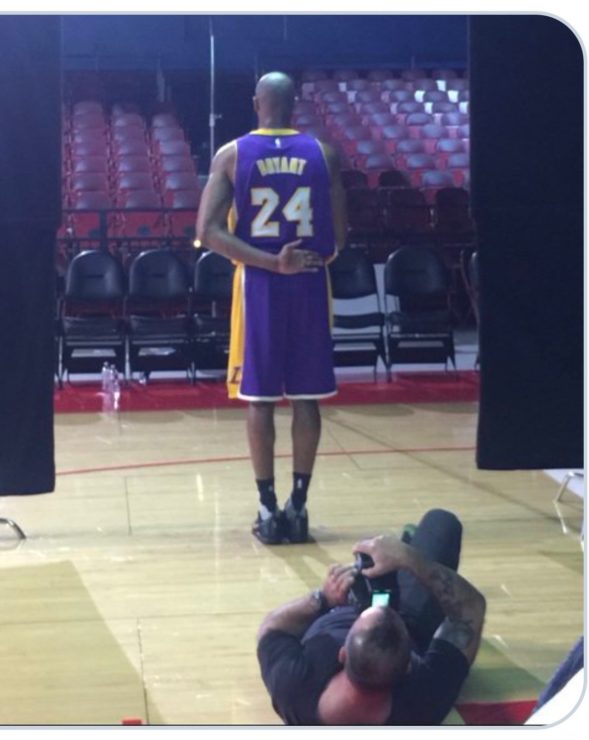 One such shoot, in Los Angeles in 2016 resulted in the phenomenal photograph entitled “The Final Bow”, which, following Kobe’s tragic passing in January 2020, went on to become the chosen image (printed in black & white) for TIME Magazine’s commemorative issue, honoring this sports icon and Father.

“Kobe loved sharks to the point of obsession, so we had that bond that only a shark obsessed person knows. He even kept a photo of a shark in his locker to motivate him before games. We connected over that.

I remember on the Turkish Air campaign, he arrived on set and came straight at me with a huge grin, saying ‘I DID IT!!!’ He was so excited to share his trip experiencing White sharks in person for the first time. We always laughed on set and he was such a solid, and very humble man”.

“Muller’s photographs represent the framework of pop culture storytelling – powerful, emblematic movie poster art and iconic character representations. This same unique perspective exists with his beautiful images of Kobe. Sharing Michael’s sincere love and affection for one of the greatest sports legends of all time may help us all to come to terms with Kobe’s sudden and tragic passing.”

Michael Muller is an award-winning photographer known for his celebrity portraits, high-profile editorial and advertising campaigns, and his key-art photography for TV and Film.

Muller’s movie and television poster and key-art credits include: Hobbs & Shaw, Deadpool, X-Men, Wolverine, Ant-Man, Captain America: Civil War, Agent Carter, Guardians of the Galaxy Vol.2, Captain Marvel, and every one of the Iron Man movies among others!

Muller is also a pioneer in the world of underwater photography, and in VR in particular. Working alongside Black Magic Design, he invented large format cameras able to shoot 4K stereoscopic imagery underwater, adding a new dimension and depth to the virtual reality experience.

Muller is actively involved in the GENESIS STEAM Program, and he recently worked with GENESIS to create a Virtual Design Studio where students utilize contemporary art techniques and cutting-edge fabrication technology to build a “future ocean prototype” while learning about ocean conservation.

Michael designated GENESIS to be the recipient of the proceeds from the sale of these collectible Fine Art Prints, as he believed that the cause echoed Kobe’s commitment to enriching the lives of the under-served youth of Los Angeles, as well as honoring his love of sharks, and the ocean.

Michael is an environmental activist, and a passionate advocate for marine and oceanic conservation. Find out more HERE.

GENESIS a nonprofit educational program created to teach children vital skills in Science, Technology, Engineering, Art and Mathematics through the use of Virtual Reality and other emerging technologies.

The National Science Foundation is quoted as saying:

“65% of students will hold careers that don’t exist yet. It’s important that students also learn how to think creatively and collaboratively to solve unforeseeable problems. This is why a recent focus on STEAM (adding creative, arts-based learning to STEM) has arisen”.

“GENESIS is honored to be the recipient of these funds, enabling us to continue to expand upon our commitment to provide under-served youth in Los Angeles with the opportunity to gain critical skills in Science, Technology, Engineering, Art, and Math – paving their way for their success in employment and entrepreneurship in the 21st Century”.

“So many people reached out to me requesting a print of Kobe, and I felt the need to offer a little piece of my history with this man that people loved so dearly. I know Kobe helped a lot of people, and especially kids. I also know Kobe loved film and technology, and when you combine those with our shared love of the oceans, well, I felt GENESIS would be a perfect place to donate to.

GENESIS do amazing work in the community, and they use VR to teach under-privileged children the problem-solving and design-based-thinking that will aid them in any future careers. GENESIS also encourages children to learn about issues like pollution and oceanic conservation, something very close to my heart.

Kobe loved film, he loved sharks, and he loved the ocean. I know he would also love what GENESIS are doing”.

Sideshow is honored to partner with Michael Muller, and to donate 100% of profits* from these commemorative prints to GENESIS STEAM.

GENESIS, the Schlesinger Academy for Innovation, is a California nonprofit corporation under section 501(c)(3) of the IRS Code.
To learn more, please contact: [email protected]

*”100% of profits” is simply defined as everything that’s left over after the direct costs associated with printing and framing these photos.

Like all businesses, there are normal expenses that are required to produce these prints, such as material costs, credit card transaction fees, and shipping. Neither Sideshow or Michael Muller will receive ANY net proceeds from these print sales.

Kobe’s 2017 essay for The Player’s Tribune, entitled “Obsession is Natural” discussed his drive, dedication and single-minded focus, and how that obsessive research led him to study the patience, timing, and angles utilized by Great White Sharks when hunting Seals off the coast of South Africa.

But his fascination with these amazing animals goes back a little further.

According to CNN, Kobe became interested in sharks as a child living in Italy, and that passion apparently stayed with him his entire life.

The Great White Shark also inspired some of his signature sneakers. From their tough, textured skin, to their sleek and ergonomic design, he often looked to nature (particularly perfectly evolved apex predators like sharks and snakes) for his design sensibilities as well as for his determination, strategy, and mental toughness

Back in 2013, Kobe swam with two Great White Sharks off Guadalupe Island. His adventure was outlined in detail in this fascinating article by CNN.

Now, in 2020, The Marine Conservation Science Institute has added a new Great White Shark, spotted near Guadalupe Island, to their database – number 24 – named “Kobe Bryant” in his memory, and to honor his love of these breathtaking creatures.