Family comes in all types of forms, and this time of year is when we gather with those who mean the most to us. However, an important question arises: If you suddenly found an alien ring with extraordinary powers or you’re caught in a laboratory explosion, which DC Comics super hero family would you join?

Family can mean relatives, friends, chosen family, pets, really whoever is important in your life. And after all, a team of crime-fighting super heroes isn’t that far off from a regular family — they joke, they fight, they expose each other to deadly Kryptonite. Oh, what? Just us? … Cool. 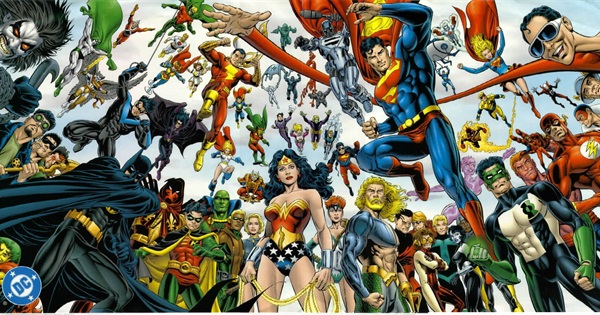 All throughout DC Comics, we see a wide variety of family dynamics at play. You’ve got your long-lost children from affairs with super-villains (hey, Damian Wayne!), your cloned relatives and alternate universe cousins (cheers, Superboy and Power Girl!), and even good old-fashioned found family (Teen Titans go!).

Before you settle on one team to be your DC Comics family, let’s get to know them a bit.

The Justice League is full of the big-name heavy hitters of DC Comics. These heroes come together when it really counts, and just like family, they will always be there when needed. From Aquaman to Wonder Woman, this team always places a heavy focus on the power of legacy. The established heroes do an inspiring job of making sure those who follow them are prepared and capable.

Speaking of legacy, a name can be a lot to live up to but these two teams have it down to a science. New members are always being welcome into the ranks, and these teams are known as places where tomorrow’s super heroes gain their footing to become leaders of their own.

Nightwing is an excellent example of someone who outgrew their mentor’s legacy and created their own. Along with other super sidekicks, he formed the Teen Titans. Now, this team helps young heroes discover their identities and forge their own paths.

They say that blood is thicker than water and, in the case of the Marvels, this proves true. The foster siblings known as the Marvel Family protect each other no matter what. They’re dedicated to family because they know at the end of the day, that’s all that matters.

Of course, family isn’t limited to blood — unless we’re talking about the bonding experience of spilling villainous blood! Doom Patrol and the Birds of Prey are excellent examples of found family in DC Comics. The heroes on these teams needed a place to call home, and they found that in each other.

You’re right, you’re right. Amanda Waller did threaten the Suicide Squad members with instant death if they didn’t work together. But you have to admit — they had fun doing it!

If you haven’t already, take our personality quiz to see which super hero team could be the perfect fit for you. The results might surprise you!

Who is your super family of choice, and who will you be fighting for that last piece of pie? Connect with other DC fans to let us know in our Local Comics Society Facebook Group, and don’t forget to Let Your Geek Sideshow!

Tune In to Sideshow's Cyber Monday Show for Big Deals!

Save the Day with Our DC Statues Gift Guide!