Ralph McQuarrie (1929 – 2012) is a household name in sci-fi. This highly skilled concept artist, designer, and illustrator worked on some of the biggest titles in science fiction history. And while he is perhaps best known for his work on the original Star Wars™ trilogy, Ralph McQuarrie helped create the visuals for many other beloved film and television properties.

Below, we’re listing Ralph McQuarrie’s contributions to decades of sci-fi art. Join us as we journey through his history, analyze his style, and celebrate his artistic legacy. 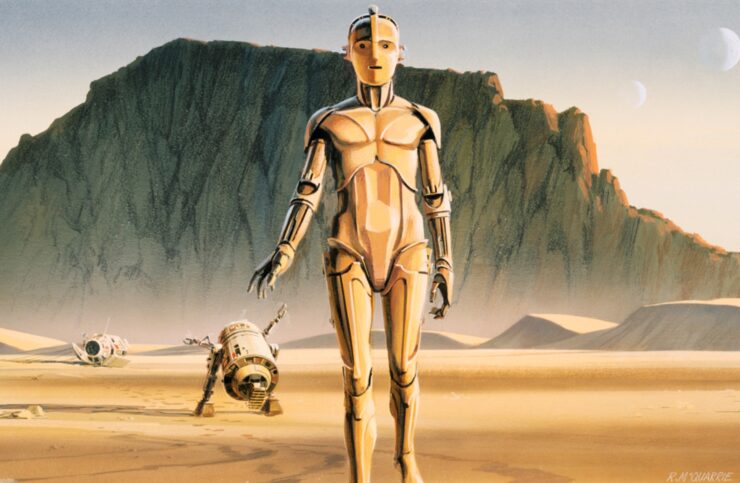 Early in his life, McQuarrie animated CBS News’ Apollo space program coverage. With his foot already stepping over the threshold into outer space, it’s no wonder George Lucas asked McQuarrie to provide visual references for Lucas’ film pitch. You can actually learn more about how these two legends started collaborating on the Stuff You Missed in History Class podcast.

These commissioned Star Wars illustrations are partially responsible for Lucas getting the green light from 20th Century Fox. Thus the two men began a lifelong professional relationship, and McQuarrie’s art is easily recognizable to every Star Wars fan. McQuarrie even illustrated covers for Star Wars novels. Additionally, modern Star Wars animated projects such as Star Wars: Rebels™ actually utilize early sketches of Wookiees™ and stormtroopers™ for the show. Wherever Star Wars is, you can see Ralph McQuarrie’s influence and impact.

Later, Ralph McQuarrie was recruited to create visuals for a Star Trek film. Based on Gene Rodenberry’s original series, the film required a new look for the U.S.S. Enterprise starship. McQuarrie worked on the design team and made a more triangular ship. Ultimately, however, the film project was scrapped. McQarrie’s design only resurfaced in 2017 when Star Trek: Discovery used it as the basis for the U.S.S. Discovery starship.

This forgotten starship is a great example of McQuarrie’s style. The ship is angular and thin. The colors are a contrasting palette of warm and cool tones. In this way, McQuarrie’s art pulls the gritty “cowboy” aesthetic more fully into sci-fi, while also highlighting the clean though battle worn future technology. 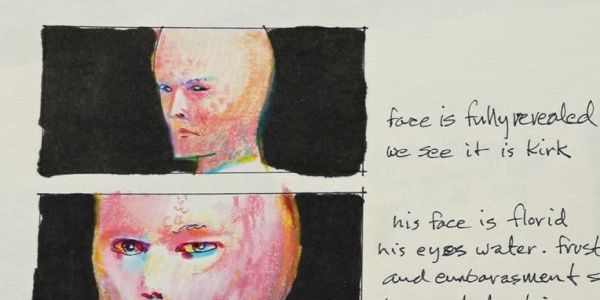 McQuarrie worked on Star Trek IV: The Voyage Home as a storyboard and concept artist. Unlike his previous Star Trek project, this film was fully realized onscreen. Plus, it is often considered one of the superior Star Trek motion pictures. It is the whale one, after all.

Close Encounters of the Third Kind 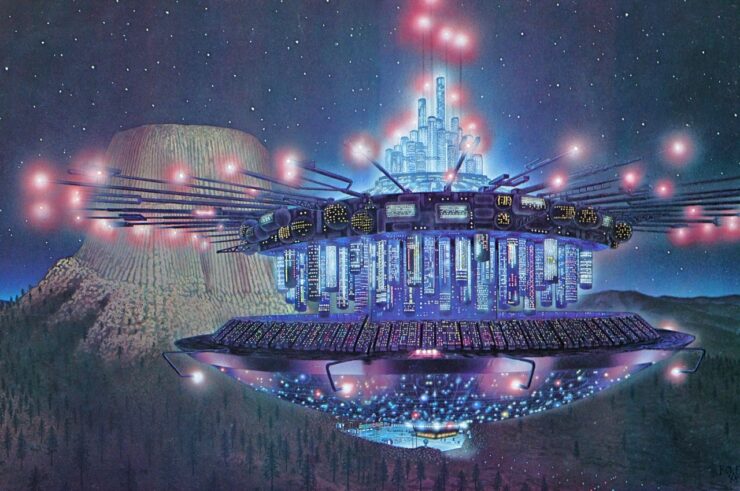 Close Encounters of the Third Kind is a 1977 sci-fi film directed by Steven Spielberg. Exploring human interactions with UFOs and extraterrestrials, it features original designs by McQuarrie. Specifically, McQuarrie designed the alien ships. In 2017, Close Encounters was deemed a “culturally, historically, or aesthetically significant” film by the Library of Congress. Thus it was preserved in the National Film Registry.

Many people and designers worked on this film. Without discounting any of them, McQuarrie’s contributions really stand out. Because what is a space travel and invasion film without the modes of transportation? The fantastic vehicles designed by McQuarrie populate the film’s sky and light up the worlds within our own imaginations. It’s no surprise that McQuarrie’s work on this movie as well as many others has reached such critical acclaim. 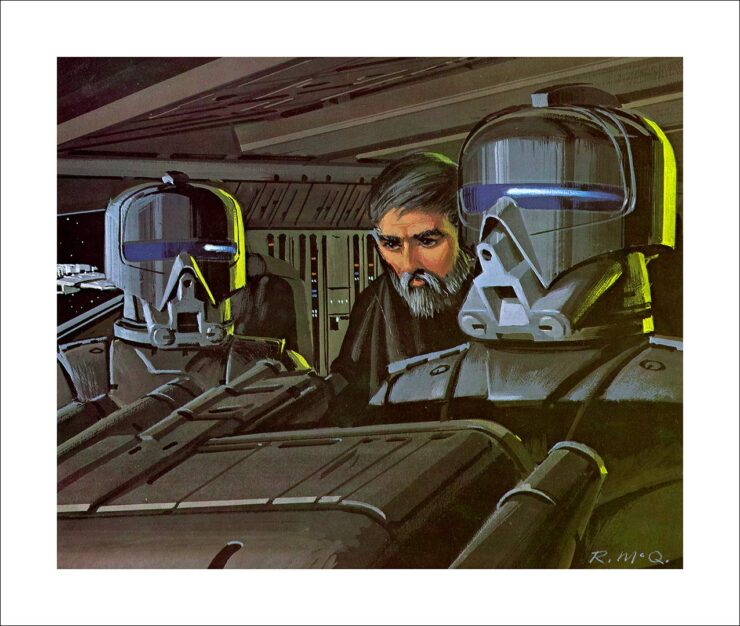 Battlestar Galactica is a science fiction television series. A cult classic, the series was once canceled and subsequently revived for 10 more episodes after a fan campaign. Part of the love for it came from its stunning visuals and sprawling intergalactic world. The spaceships, space suits, and Cylon Centurions were breathtaking. And who’s responsible for that?

You guessed it! Ralph McQuarrie worked on Battlestar Galactica. His conceptual work and designs are especially apparent in the aircraft and armor.

In Raiders of the Lost Ark (1981), Indiana Jones looks at a Bible depicting a gruesome scene. The illustration shows the power of the Ark of the Covenant as it is carried into battle. Radiating lightning as well as the “Power of God,” the illustration has a profound impact on Indy as well as the audience. In a single image it has conveyed the danger and raw power of this artifact, and we’re all extremely invested in our hero nabbing it before the Nazis can.

This Bible art was, of course, created by Ralph McQuarrie. It was created at the personal request of George Lucas, and is McQuarrie’s single contribution to the Indiana Jones franchise. Therefore its rarity and unique inclusion brought it to instant fame. 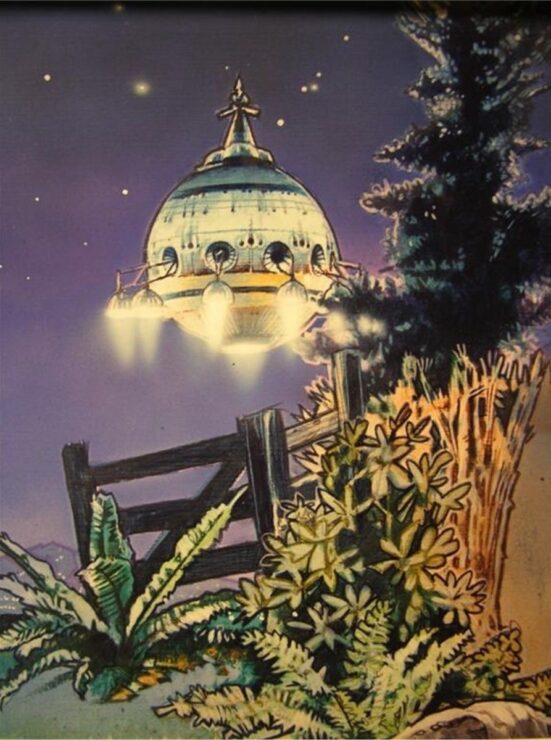 Spielberg obviously appreciated McQuarrie’s work for him in the ’70s. Thus the director and designer teamed up again in 1982 for E.T. the Extra Terrestrial. Like his previous Spielberg project, McQuarrie was tasked with concept art and designing the alien ship. You can see above the more childlike wonder imbued in this illustration. The colors are more vibrant, and the shapes more indicative of a nighttime storybook.

E.T. the Extra Terrestrial went on to surpass Star Wars for highest grossing film of all time. It was also inducted into the Library of Congress’ National Film Registry. This simply serves as more proof that a sci-fi project that McQuarrie has touched will always flourish.

Cocoon (1985) is a sci-fi, comedy, and drama film directed by Ron Howard. The film explores both the dream of space travel and extraterrestrial life as well as the legend of the lost city of Atlantis. Therefore Ralph McQuarrie’s concept art is filled with lush underwater scenes alongside a peaceful alien species’ spacecraft.

What is your favorite concept design made by Ralph McQuarrie? Let us know in the comments, and don’t forget to Let Your Geek Sideshow!