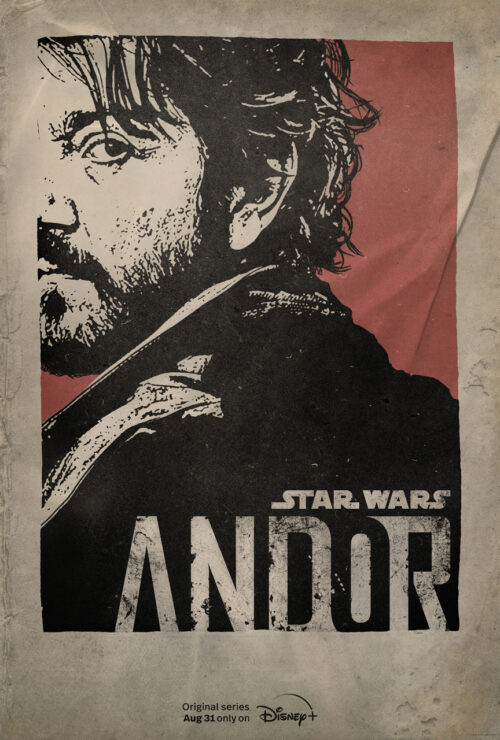 Star Wars™ Celebration is in full swing! And you know what that means — trailer drops! This Thursday, May 26, brings us news about the upcoming Disney+ Star Wars™ television series Andor™. Star Wars’ social media released a poster, a streaming date, and also a teaser trailer.

See the poster above or on Star Wars’ Twitter, get ready to tune in on August 31, 2022, and view the trailer below or on Star Wars’ official YouTube channel. Then, join us back here as we break down all the exciting details from the first Andor trailer!

The new Andor trailer opens to a tower rising far above the ground. There’s a huge stone slab inside the open area, and nothing else … until a man walks up. Holding two hammers, he braces himself. He inhales. Then he exhales, striking the slab. This sound continues to overlay over the remaining footage, alongside a low droning voice.

It’s chilling. Tense. And exactly the tone we’d expect because Andor takes place only five years prior to the events in the film Rogue One™ — events that lead to Cassian Andor™, the titular character’s, death.

A lot of the trailer cuts through quick scenes. It is, after all, still just a teaser trailer. But there’s a lot to glean from these montage moments nonetheless. The first shows a small group of villagers as they watch a ship crash land onto their planet. Where is this lush forest? Could it be Fest™, Cassian’s home planet in the Outer Rim™?

It’s also unclear whether or not this is flashback footage. Maybe this is a young Cassian Andor — which would work tonally, considering Jyn Erso’s™ flashback sequences in Rogue One. Or this is simply an unrelated human civilization. We don’t know. What we do know is that there’s no way things can turn out well for them now that the war has literally set fire to their home.

Next, a droid searches through dark stacks of rubble and wreckage. Is it helping a scrapper, like Rey™ on Jakku™? We don’t really have time to ponder this before we move to a starkly contrasting image: a pristine white factory. Workers in white and orange uniforms build something mechanical on the conveyer belt. Weapons? More droids? And these “workers” seem to really be prisoners … of who, though?

Meanwhile, in a mountain valley, a ragtag rebellion prepares for a fight. We jump to a warm-toned town. At a little over 30 seconds in, we get our first dialogue line in the entire trailer. “Go!” a man yells, gesturing frantically to a teenager. The teen — another younger Cassian? — runs off while the man strikes a metal pipe. It’s a clear warning sign. But to alert who? And about what? Presumably the Empire, if the incoming ships in the next scene are any indication. But we don’t know for sure.

After a few flashes to a construction site and a nervous shopkeeper, we settle on a blonde character sitting calmly in an alleyway. Stormtroopers™ march past. The character seems to be a lookout of some sort. Perhaps an ally of the next character, who is besieged in their home by a collection of blue-and-orange uniformed officers?

A third of the way into the trailer, we finally get a glimpse of Diego Luna’s Cassian Andor. He dodges behind a wall, every bit the spy and rebel we expect him to be. Remember, he’s been in this fight since he was six years old. The Andor series centers around his work for the Rebellion and Mon Mothma™. So what’s he up to during this nighttime stroll? Something he definitely shouldn’t be caught doing.

Cassian’s dialogue overlays the next shots. “They’re so proud of themselves,” he sneers. “So fat and satisfied.” We’re shown various Imperial officers in various stages of gloating. In juxtaposition, the next clip shows a woman running for her life on dirt streets.

The Empire and Mon Mothma

Now a new voice joins the fray. “They’re everywhere,” chimes in an unknown character. “They’re watching me now.” Under this dialogue are the faces of an Imperial officer and Death Troopers™, as well as Mon Mothma. Probably the speaker, she sits uncomfortably in a transport ship. She also walks through a party in a gold dress, her fake smile falling away into unease.

Beginnings of a Battle

“Soon enough,” narrates Stellan Skarsgård’s unnamed character, “these days will end.” He’s looking at an Imperial compound filled with weapons. The concern on his face is wholly warranted, especially when we watch the Empire’s reach expand into the seas and inside the maze-like, tunnel-filled structure where the factory workers — or prisoners? — walk.

“There will be no rules going forward,” he says. We watch an angry Imperial stare at Cassian Andor’s image. It’s the Star Wars equivalent of a wanted poster, with Cassian’s hologram likeness spinning in front of a calculating witness.

In the last part of the trailer, we get a really visually appealing sequence. We cut through many scenes, environments, and situations all by watching individual characters’ backs. They’re walking, or standing, or even rushing toward a firing squad. Once this ends, we’re back to a montage and voiceover narration. Among the important images are a bloodied Adria Arjona (character name unknown), an enforcement cruiser getting flipped (much to our bad guys’ chagrin), and Cassian dropping into a stolen T.I.E. fighter™.

“People are standing up. That’s what a reckoning sounds like.” Fiona Shaw doesn’t have a confirmed character name, but she sure carries herself with poise, confidence, and importance. We can’t wait to see what this Harry Potter alum has in store for us.

There’s certainly a lot to unpack in less than two minutes. First, there’s a ton of new faces. We look forward to meeting all of Cassian’s allies and enemies. Do you have a character who you’re already intrigued by?

Second, it looks like we’re traveling to an awful lot of different planets. For a rebel spy who has to gather intel, and who is vital to the success of the Rebellion, that’s all in a day’s work. And it’ll certainly be amazing to explore new worlds with Cassian Andor as our guide.

Are you excited about Andor? Join the conversation about this highly anticipated Star Wars series at side.show/geekgroup, and don’t forget to Let Your Geek Sideshow!