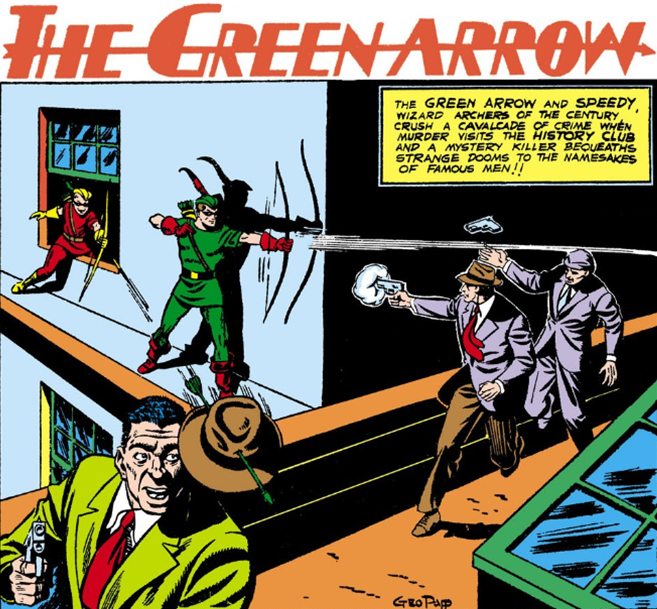 In November of 1941, More Fun Comics #73 introduced the Green Arrow as Oliver Jonas Queen, a wealthy socialite who owned Queen Industries in Sky City. In most of the subsequent origin stories, Queen was abandoned on a deserted island and forced to take up archery in order to survive.

Originally, however, he was just an archaeologist who teamed up with his partner, Roy Harper, after criminals destroyed his museum. The duo discovered enough treasure to make them wealthy, and they used the money to fund their work as crime fighters.

Writer and editor Mort Weisinger created the Batman-like character of the first issue, while George Papp provided the illustrations. The Green Arrow was basically a Bruce Wayne obsessed with archery, based heavily upon Robin Hood as well as the book and movie serial The Green Archer. For all intents and purposes, he was a Batman/Robin Hood hybrid: he had a Robin-esque sidekick known as Speedy, a Joker-esque nemesis called Bulls-Eye, and even had his own Arrow Cave.

The Green Arrow remained largely unchanged for decades, other than some small changes in appearance in 1969 and a story arc where Queen lost his fortune and got involved with politics, sticking up for the underprivileged like a real modern-day Robin Hood.

Aside from his physical resemblance to Robin Hood, this was the beginning of the Green Arrow character as a commentary on society and a symbol for the disenfranchised, trading in the Batman parallels and the more carefree characterization of the 1940s to become a well-developed figure in DC Comics. 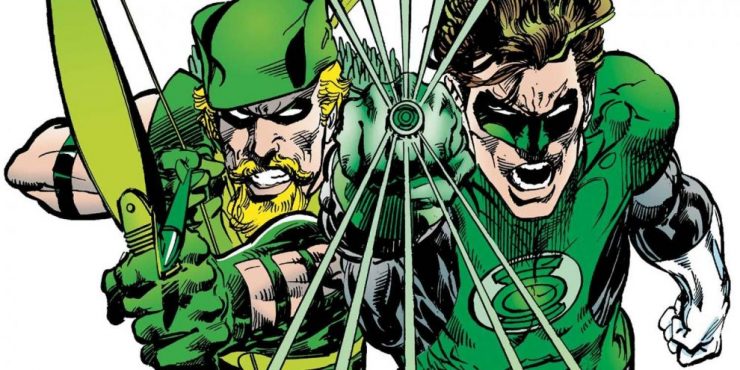 The character became radical and volatile, almost the polar opposite of the pro-establishment Green Lantern character he was paired with in the 70s.  The Green Arrow/Green Lantern series was billed as a definitive series that tackled pressing issues as a part of the era of “hard traveling heroes”.

It may sound sort of out-there to those unfamiliar with the history of the comics, but in the series Arrow’s sidekick, Speedy, controversially became addicted to heroin and Arrow and Lantern actually drove around the country in a pickup truck looking for ways to fix both social and environmental problems. But hey…it was the 70s! 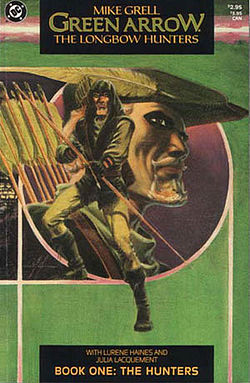 After the Crisis on Infinite Earths issues published in 1985 and 1986, a run that saw a yet-unparalleled comics death toll, the Green Arrow character was completely rebooted. In the late 80s, writer and illustrator Mike Grell revived the Arrow as a dark, gritty hero in the midst of an even darker world. The Black Canary (AKA Dinah Lance, Queen’s girlfriend) was tortured by criminals, and Queen took revenge and killed her attackers. There were other criminals that the Arrow killed as well—he apparently didn’t share the mercy for life always demonstrated by Batman and other heroes—and who can blame him?

In the Zero Hour: Crisis in Time! miniseries of 1994, Hal Jordan, former leader of the Green Lanterns and best friend to Green Arrow, went insane after the destruction of Coast City. He destroyed his own Green Lantern corps and used their rings to pull chronal energy from the universe, his goal being the complete destruction and then rebuilding of the universe as he saw fit.

Jordan had been taken over by Parallax, an evil parasite that had existed for billions of years. Arrow is forced to shoot the possessed Jordan, which gives the other heroes the time they need to stop the destruction of the universe. Oliver believes he has killed his best friend, and he decides to give up his career as a hero, destroying all of his arrows in the process.

Later on, he meets a young archer named Connor Hawke, who helps him defeat a group of assassins that want Arrow dead. Hal Jordan reveals himself to be alive, and he also reveals that Connor Hawke is actually Oliver’s son from a previous relationship with a woman named Sandra Hawke.

At the close of a story arc involving government conspiracies, Arrow sacrifices himself to save the city of Metropolis. Hyrax, leader of Eden Corps, had commissioned a bomb called the Mutajek 9-9 to blow up the city. On a plane, Oliver’s arm was inside of the bomb, and it would detonate if he pulled it out. Superman could have cut off his arm, but Green Arrow declined, not wanting to live life without use of the limb. The plane exploded in the air, killing Oliver in the process. 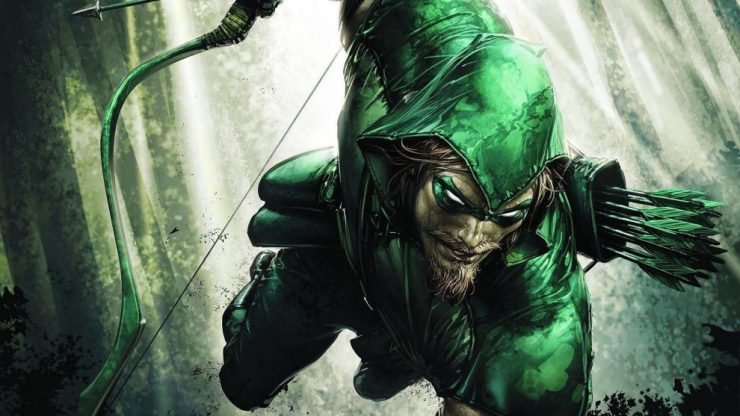 Connor Hawke briefly took up the mantle as the new Green Arrow, but Hal Jordan used his powers to bring Oliver back from the dead. The new Oliver had no soul, and the only memories he had were of his life before Black Canary was tortured. Eventually, Arrow’s soul made contact with his body, and the hero, now made whole, got right back into the action. He went on to save the life of a teenage girl, Mia Dearden, and this character rigorously trained herself to become the new Speedy.

In 2006, a series of books see Oliver becoming the mayor of Star City, which enables him to fight crime on two levels—both on the streets and from within the system.

He advocates for gay rights and marries many gay couples. He resigns from office after the Star City police commissioner, Brian Nudocerdo, reveals that Queen had been funding the Outsiders, a team of super-heroes turned bounty hunters.  Queen had only funded them so that his former partner, Roy Harper, could leave the group and join the Justice League once the Outsiders were more stable financially. 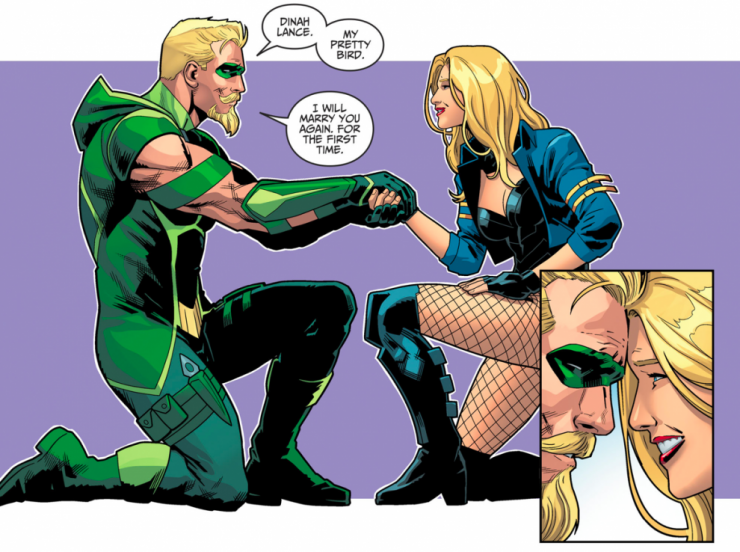 Green Arrow and Black Canary (Dinah) planned to get married, but Arrow went insane and attacked her. After Canary kills him in self defense, it is revealed that the man she killed was an imposter, and the real Oliver Queen had been kidnapped. On a mission to rescue him, Connor Hawke is struck by a bullet that puts him into a coma, though he comes to after a series of further adventures, including the official marriage of his father and Dinah.

As Hal Jordan and Oliver Queen set out to form a new Justice League, a villain called Prometheus plans to destroy the various cities that the heroes of the DC universe call their homes. After Star City is bombed, Arrow finds Prometheus and kills him. He then attempts to locate and murder the other villains who helped Prometheus.

However, after Mia captures the Electrocutioner and reveals her desire to kill him, the guilt over these vengeful murders begins to weigh Oliver down. He turns himself in, retires from organized heroics, and is exiled from Star City. To top it all off, the Black Canary declares the end of their marriage, and Oliver ends up living in a mysterious forest in the ruins of Star City, a forest created by Deadman using his power ring. As the remaining survivors of Star City go on with their lives, Oliver remains hidden amid the trees as a watchful protector of the weak.

The Green Arrow has been featured in other crossover comics and games, but the main story was rebooted a few more times starting with the 2011 New 52 comic line from DC. In the New 52, a series which saw the rebirth of many classic DC characters, Oliver Queen runs a company called Q-Core, a part of Queen Industries that funds Oliver’s heroic exploits and technology as the Green Arrow. Some of the old characters were omitted from this storyline, while others were added. The new generation of Green Arrow comics, which continued with 2016’s DC Rebirth, generally maintained the spirit and themes of the near-century old character.

The CW Network released Arrow in 2012, a gritty live-action series based on the Green Arrow comics. It has been a huge success, even going so far as to generate spin off shows like The Flash and Vixen, as well as tie into other shows such as Supergirl, DC’S Legends of Tomorrow, and Constantine. These television properties are all set within the same fictional universe—Arrowverse.

There are a few major differences between the TV series and the comics. Star City is referred to as Starling City for the first few seasons, Arrow has a half sister (the new Speedy, taking elements both from the original Speedy and from the Mia Speedy), and the overall look of the Emerald Archer is more in line with Assassin’s Creed than it is with Robin Hood. The tone of the show is similar to the tone of Grell’s comics in the 70s than most other eras.

Green Arrow may not be quite as popular with geeks as Batman is, but for a character that started out as a simple reaction to the Caped Crusader, he has certainly come a long way. More than perhaps any other superhero, Oliver Queen is unequivocally human—he makes mistakes, he wrestles with emotion, and he’s a little bit insane from his time stranded on a deserted island.

Aside from all the outlandish trick arrows and super villains, the Green Arrow is basically a very skilled archer who uses his keen eye and hands to put down the evil of this world. Something like that can certainly exist in real life—and somewhere out there, it probably does.

Want to learn even more about Green Arrow’s history throughout the DC Universe?  Check out the Green Arrow Then & Now podcast!

What’s your favorite Green Arrow storyline? Let us know in the comments, and make sure to Let Your Geek Sideshow!