We have a few more weeks until the end of The Clone Wars. But the last few episodes have shown us just how close we are to the finale, which will lead right into the events of Revenge of the Sith.

The episodes seem to be getting better and better. And the latest episode, Part One of the finale, is being celebrated by many as one of the best entries of all time.

It’s probably going to get even cooler from here on out. As we wait with bated breath for the rest of the finale, let’s recap on Episodes 7-9. (If you need a quick refresher, we recapped Episodes 1-3 and Episodes 4-6 in previous blog entries.)

This set of stories starts with prison, freedom, and friendship, and ends with reunions, emotion, and peril.

Ahsoka and the Martez sisters are once again prisoners of the Pykes. As they talk in their cell, we learn why the sisters don’t like the Jedi. Years ago, while chasing a prisoner, the Jedi accidentally destroyed the Martez home, killing their parents.

At this moment, the sisters don’t know that their new friend is actually one of the people they hate. But if they find out, things are really going to get interesting.

Eventually, Trace escapes as she’s being interrogated. She runs by the prison cell, the villains in pursuit. Ahsoka sees her and uses the Force to bust out before waking up Rafa, who had passed out from torture. They catch up to Trace and start planning their next move.

After a few fight scenes and wily distractions, the sisters are captured again, but Ahsoka manages to get away. None of them know they are being watched by a trio of mysterious figures – Mandalorians. One of them recognizes Ahsoka. They have a bold plan in place to take back control of their world from the clutches of evil, and they decide to keep an eye on Ahsoka. She may come to be of use in their fight against, “a common enemy.”

Ahsoka comes to the sisters’ rescue. They rush away on a speeder, but the Pykes shoot it down before taking the trio prisoner once again. 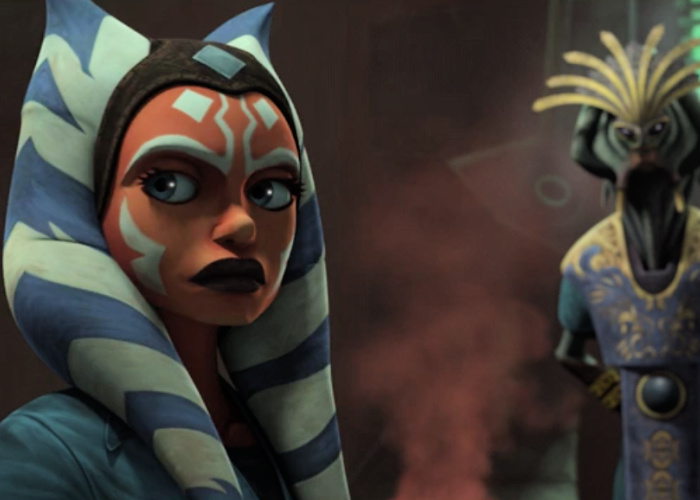 In this episode, we’re reminded why we love the Ahsoka character so much. Her skills and ingenuity are in full force (no pun intended), and her relationship with her new friends is shaping up to be a memorable part of the franchise.

Ahsoka and the Martez sisters could be seen as very unlucky. They keep getting caught. But paradoxically, they could also be seen as greatly fortunate. They are the good guys after all, so they always seem to narrowly escape the jaws of death.

When the three of them are brought before Krim, the Pyke leader, Ahsoka makes a deal. She persuades the Pykes to let the sisters go pick up the missing spice, falsely claiming that it had been hidden rather than lost. Ahsoka seems to betray her friends here, but it’s all a ruse. She tells Krim that if they don’t get the spice back, she will reveal to them the location of the sisters’ family. Of course, they don’t really have a family, so the sisters know that Ahsoka isn’t really betraying them. She’s giving them a chance to escape. And with them gone, she won’t have to hide her Jedi skills.

In a conversation with another Pyke, Krim admits to knowing that Ahsoka was deceiving them. But he’s hanging on to the chance that it’s not a deception, because if he doesn’t get the spice back, his life is in just as much danger as the Martez sisters. He answers to a very powerful man.

The Martez sisters are tasked to go get the spice. But since the spice they had is gone for good, they need to find another source. They try to trick some workers at a loading dock into giving them some spice. They falsely claim they’ve been scheduled to pick up a shipment. At first, the plan looks like it might work, but then the manager arrives. After a brief fight, the girls actually manage to escape with the stolen goods. When they get back to the Pykes, they plan to rescue Ahsoka.

Back at the prison, Ahsoka escapes and finds some bombs, which she plants in various locations. She then sees the Pykes communicating with someone via hologram – Maul, evil and imposing as ever. It’s revealed that the Pykes are working under his authority. Ahsoka also learns that he is on Mandalore.

Ahsoka is captured again, and the Pykes learn that she is a Jedi. When Ahsoka’s friends arrive, the Pyke leader tells them as well. The sisters are stunned – their new friend was a part of something they despise. But they don’t have much time to think about it. Ahsoka’s bombs explode, giving her and the sisters a chance to finally escape for good.

They make it back to Coruscant in the Silver Angel. Now knowing the truth about Ahsoka, the sisters are actually more stunned than angry. She tells them that she doesn’t see herself as a Jedi anymore. But Rafa says that she’s wrong – that Ahsoka embodies everything a true, good Jedi should be. Ahsoka’s morality, heroism, and selflessness have given the sisters reason to believe the Jedi aren’t all bad after all – and one of them is now their friend.

Just then, the three Mandalorians, led by Bo-Katan Kryze (formerly of Death Watch) arrive and ask Ahsoka for help. Their plan is to bring Maul to justice once and for all.

Ahsoka decides to leave the sisters and go with Katan. At this point, it’s easy to really appreciate Ahsoka as a character. She’s been through a lot lately – danger, imprisonment, doubt, and the ups and downs of friendship. Now, she’s going to work with former enemies to bring down the evil of Maul.

But the hardest part for Ahsoka is that she will have to ask the rest of the Jedi to help her. She’ll have to face Anakin, Obi-Wan, the Clones, and everything from her former life. 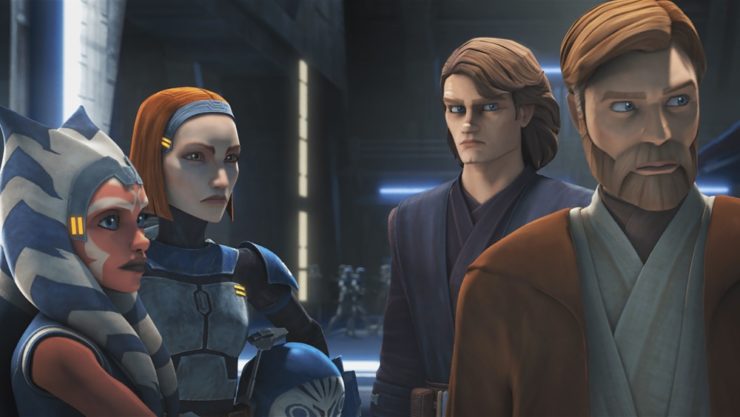 Episode 9 is the most cinematic piece of Clone Wars we’ve had in a long time. The opening titles start out quite differently, reading “A Lucasfilm Limited Production.” Then, the official Star Wars theme music plays rather than the Clone Wars version. This episode is pulling out all the stops, behaving more like a movie than a cartoon.

“Old Friends Not Forgotten” is part one of “The Siege of Mandalore”, the four-episode Clone Wars finale. These events were mentioned in The Mandalorian and Rebels, and it’s exciting to finally watch them unfold.

Right from the get-go, we’re treated to an awesome battle. The Republic and the Separatists are fighting on a bridge on Yerbana. Kenobi’s forces are almost overwhelmed, but Anakin comes to the rescue, casually dodging some blaster fire. He then pretends to surrender to the droids, distracting them enough for a troop of clones to come out of hiding and lay waste to the mechanical army.

The visuals are fantastic, and classic Star Wars music plays in the background. Plus, Anakin acts like Anakin – funny, confident, and sneaky.

Towards the end of the epic clash, Anakin and Obi-Wan are contacted by Ahsoka Tano and Bo-Katan. They all meet on a Republic ship, and it’s wonderful to see Anakin reunited with his former padawan. But there’s no time to catch up – Tano and Katan reveal to the Jedi the location of Maul. They request that the Jedi help them execute a siege on Mandalore. Much to Katan’s chagrin, Kenobi decides to ask the Jedi Council how to proceed.

As Katan storms off, fearing they don’t have time for debate, master and apprentice finally get a chance to talk. Anakin has a surprise for Ahsoka. A troop of clones are lined up to welcome her, each one bearing orange paint on their helmets to match Ahsoka’s face.

The touching reunion is cut short as they hear some troubling news. General Grievous has made a bold move against the Capital of Coruscant. They’ve lost contact with Chancellor Palpatine, and he’s likely been captured. This shows us how close the series now is to the events of Revenge of the Sith – at the start of that film, the Jedi rescue Palpatine from Grievous’s ship.

Most of the Republic army is now assigned to try and stop Grievous, but Ahsoka and a group of clones are permitted to go to Mandalore with Bo-Kotan.

They arrive on the planet and are met with the deadly force of Mandalore’s new government. After some intense action (and a touching moment between Ahsoka and Rex), the false leader of Mandalore (Almec) is captured by Bo-Katan’s gang. But a horrible truth is revealed – this whole thing was a trap.

Deep underground, Ahsoka is confronted by Maul himself. He is surprised to see her, as he expected his nemesis, Kenobi. But he hates Ahsoka too, so we’re definitely in for some crazy conflict.

The episode ends on a level of extreme intensity, making us incredibly eager for the continuation.

Is Season 7 of Clone Wars some of the best Star Wars you’ve ever seen? Let us know in the comments, and Let Your Geek Sideshow.

Darth Maul in the Mandalorian?, Hercules Adaptation, and more!