There are so many things to do when you’re stuck at home: read comic books, write, read, paint, admire your collectibles, clean the house, forget all that stuff and turn to your home screen… Because if ever there was a time to binge-watch some television, it’s now!

Marvel and DC have over 20 shows each, whether based off their comics or simply produced by the company. Among those, there are series that are currently airing, that are off the air, that are animated, and that are live action. Plus, there are some awesome shows based on independent superhero properties too, so there’s no shortage of comic-based content.

If that’s overwhelming, have no fear! Read on for a list of 5 superhero television streams you could stream right now on 5 different platforms!

Set in the MCU, this fantastic mix of young adult angst and super solutions is a must-see! Based on a comic of the same title by Brian K. Vaughan and Adrian Alphona, Runaways focuses on a team of 6 teenagers with various powers who must escape their sinister parents’ shady organization, ‘The Pride’. As a teen, you probably thought your parents were evil too- well, they’ve got nothing on these time-traveling, mutant, human-sacrificing cultists!

Although these super-kids function great as a group, it’s also easy for every fan to pick a favorite. If you aren’t enthused by the goth witch, give the geek girl with glasses and a psychically linked velociraptor a try. There’s also an inhumanly strong little sister, a glowing human-alien hybrid, a nerdy leader, and a brilliant jock. Did I mention the show is astonishingly creative?

Runaways has 3 seasons, which were first serialized on Hulu and are now all available with a subscription to Disney+.

Legion is less “superhero show” and more psychological thriller, family drama, and sometimes-musical with an unreliable narrator and a whole host of odd characters. David Haller winds the audience through his past, present, and future while battling his mutant abilities. His supporting ensemble mostly support his endeavors, except when they have something to gain for themselves. The series is captivating, terrifying, and aesthetically pleasing. And you get some clever fourth wall breaks, too.

Unique and rightfully praised as groundbreaking, Legion ended after 3 seasons on FX. Now you can watch the entire thing—although you might want to give your brain a break and take this show more slowly—on Hulu.

Meaning this in the best way possible, Doom Patrol is one of the most bonkers superhero shows out there. Unsurprisingly, the source material, a comic by Arnold Drake, Bob Haney, and Bruno Premiani, lends itself to the screen adaption’s strangeness; each member of the Doom Patrol has powers that caused them to be alienated by others. Alan Tudyk narrates with comedic poise as this rambunctious, mismatched, and dysfunctional team/family learns how to save the day—more often that not with disastrous results.

But Doom Patrol is also one of the most truly heartfelt superhero shows, as well. “Crazy” Jane’s 64 personalities need a little love. Larry Trainor AKA Negative Man needs to feel a little less lonely. And downtrodden robot-man Cliff could stand to open up his cold, metallic exterior. There are a few other misfits to add to this ensemble, but you could stand to be a little surprised when you click ‘play’ on that pilot episode.

Doom Patrol only has one season (15 episodes) so far, but it has been renewed for more. You can access it with a subscription to DC’s exclusive streaming platform, DC Universe. And please scan it before you share it; this show is definitely not kid friendly!

Legends of Tomorrow isn’t grounded in any specific comic book, but rather pulls characters from every corner of the Arrowverse. ‘Arrowverse’ is a term describing the CW Network’s DC TV continuity franchise that includes the shows Arrow, The Flash, Supergirl, and many more. Because the characters can all drop on over to each other’s shows, Legends of Tomorrow was able to create a team using fan favorite secondary characters. Hoping to see how John Constantine handles shapeshifters? And what does Captain Cold do when he’s not robbing people in Central City? Ever wonder how Hawkgirl and the White Canary would get along? Tune in to find out!

This television series is rooted in some excellent dialogue, relationships, and humor. Not many networks could pull off time travel, talking toys, accidentally alive puppets, and magic songs that counteract death, but not many networks get to air Legends of Tomorrow. The CW is currently hosting season 5, with all other episodes streaming through Netflix.

You’re also in luck, because Netflix has the other Arrowverse shows! Although not necessary to watch every single one of these CW series, it’s nice to know what’s happening during their famous crossover events. That, or you can remain happily confused while you watch superheroes kick alien butt. Totally up to you. 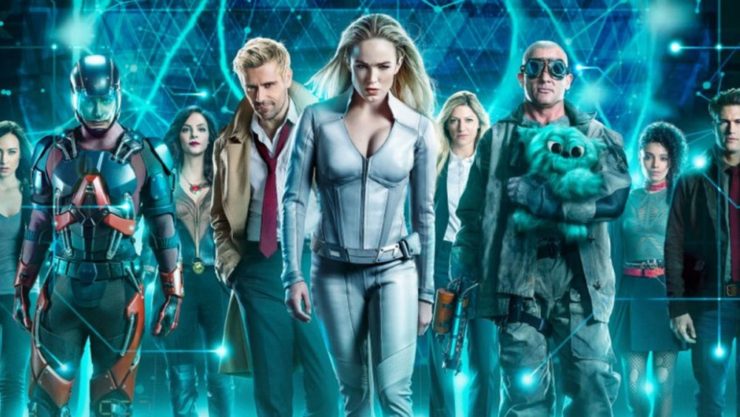 This show is included for fans of non-superhero-superhero shows. The Boys is pretty much as anti-superhero as one of its main protagonists, Billy Butcher, who considers every hero a sham. In The Boys, caped crusading is an American marketing scheme, the ‘heroes’ are really villains, and squeaky clean Homelander is about as dirty as can be. Garth Ennis, author of the original comic book on which this series is based, is known for his dark humor, grimy style, and all around disbelief in the usual glitz, glamour, and goofiness that you come to expect from many comics.

The Boys dives deep into abuse of power, media cover-ups, and the horror that happens behind the scenes. Hugh spends the show trying to expose the USA’s favorite superpowered celebrities as murderers and their handlers as liars. However, in his attempts to take the moral high ground, he slips and slides a little lower himself.

Each episode is bizarre and bloody, so approach The Boys with strong caution and an equally strong stomach. You can watch all 8 episodes of the extremely R-rated season 1 on Amazon Prime, and then watch the trailer for season 2 once you’ve blazed through the show itself! 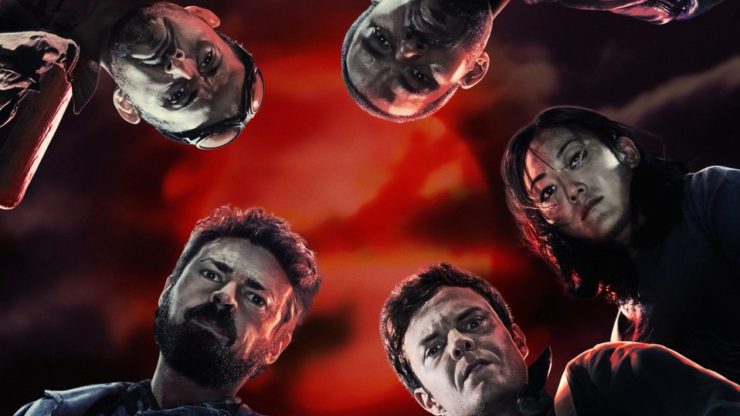 Hopefully this list can keep you occupied for a while! Tell us your favorite superhero shows available to stream now, or give us more recommendations in the comments!

And as always, don’t forget to Let Your Geek Sideshow!