Ms. Marvel‘s season finale is upon us! Last week’s episode, “Time and Again,” catapulted viewers to the 1940s in British-occupied India. We observed the events leading to Aisha’s untimely death and how Kamala traveled in time to save her grandmother. Najma and the ClanDestines met their demise after coming in contact with the Veil of Noor, while Kamran inherited his mother’s powers upon her death.

“No Normal” unleashes a New Jersey showdown between Kamala and the DODC as she tries to shield Kamran from the ruthless organization. Despite the rushed plot and the race to tie loose ends, it’s inarguably the show’s best episode. Let’s place the blame squarely on Marvel’s insistence on the six-episode format for every Disney+ live-action series.

Anyway, rushed narrative aside, “No Normal” is still good fun, with heartwarming scenes, dazzling displays of heroism, delightful surprises, and a jaw-dropping cliffhanger. The episode focuses heavily on the importance of acceptance, specifically self-worth.

On the Hunt/On the Run

We open with Agent Deever conferring with her DODC team outside the Circle Q wreckage. She orders her crew to survey the area for the superpowered individual responsible for this explosion, AKA Kamran. Meanwhile, Bruno helps an injured Kamran escape via the subway.

Unfortunately, Kamran struggles to keep his newfound abilities in check, drawing attention to himself by casting Noor-based crystalized beams from his hands. We see DODC officers hot on his and Bruno’s heels. 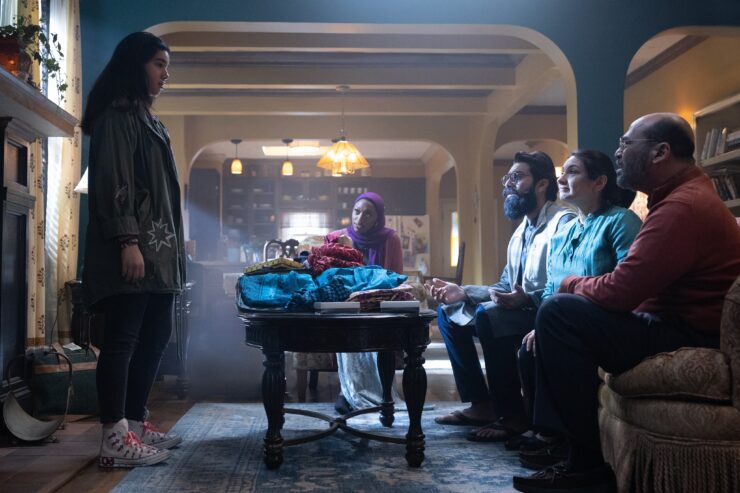 Later, Kamala and Muneeba arrive home from Karachi with gifts for the family. At the encouragement of Muneeba, Kamala discloses a massive secret to Yusuf, Aamir, and Tyesha — she’s the famous Night Light. However, as with most family secrets, everyone already knows about Kamala’s impressive powers. Yusuf beams with pride for his super hero daughter. It’s a sweet scene.

Then, Nakia video calls Kamala to deliver the news regarding the Circle Q explosion. Bruno is currently MIA, so Kamala embarks on a journey to find her best friend. But first things first… 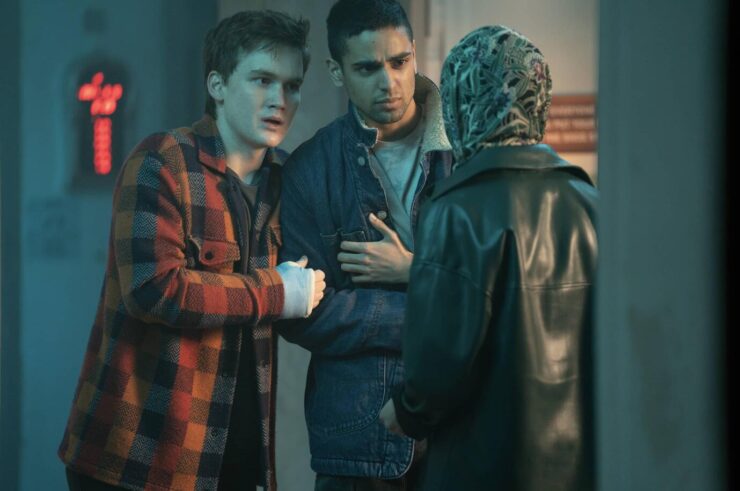 The bystanders of Jersey City marvel at Kamala hopping through the air while searching for Bruno. Meanwhile, Bruno and Kamran seek shelter at the mosque, although Nakia warns the DODC has already barged in once.

Deever and her squad go toe-to-toe with Sheikh Abdullah, and Nakia provides a distraction of her own so that Kamran and Bruno can flee. Sheikh Abdullah gives the boys matching black caps to don as disguises. Kamran’s cap has “Halal” scrawled across the front, which translates to “permissible” in English. Bruno’s hat has “Haram” emblazoned, meaning “forbidden by Islamic law.” We love best friends with matching caps — and we know Marvel loves a cap-based disguise!

Thankfully, Kamala swoops in to save Bruno and Kamran. Kamala calls Kareem, begging the Red Daggers to provide sanctuary for Kamran despite his ClanDestine background. Kareem agrees to do this, albeit reluctantly.

Setting Up Shop in the School

Kamala, Bruno, and Kamran unite with Nakia at their school, knowing the DODC will inevitably track them down. Kamala apologizes to Nakia for withholding her power discovery from Nakia. Zoe arrives unexpectedly, revealing that she films her TikToks at the school since it has optimal lighting. Zoe thanks Kamala for saving her life at AvengerCon, and vows to help our gang protect Kamran from the DODC.

So, Kamala doodles a game plan on a chalkboard, and it’s reminiscent of the whimsical visuals from the pilot episode. Aamir appears, informing Kamala that, naturally, her parents sent him to supervise his little sister. Super heroes don’t need chaperones, but baby siblings do!

Meanwhile, Agent Cleary contacts Deever and orders her to stand down despite her statement about two superpowered beings stalking the school grounds. However, when she hangs up with Cleary, Deever gives her team the go-ahead to move forward with the plan. 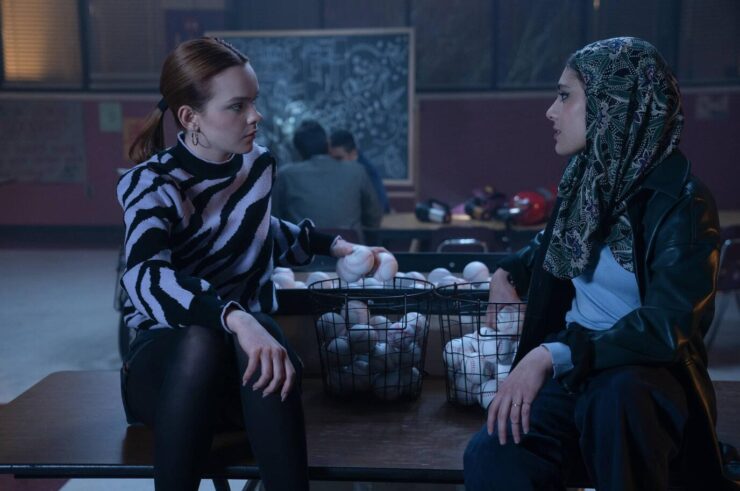 Nakia confronts Zoe regarding the latter’s knowledge of Kamala’s abilities. Zoe gently reminds Nakia that it’s Kamala’s choice whether or not she discloses her secret. The two share a smile and a sweet moment of bonding.

Speaking of secrets, Kamala divulges what transpired in Karachi to Bruno, revealing that Najma died. Bruno urges Kamala not to inform Kamran about his mother until they get him to safety. 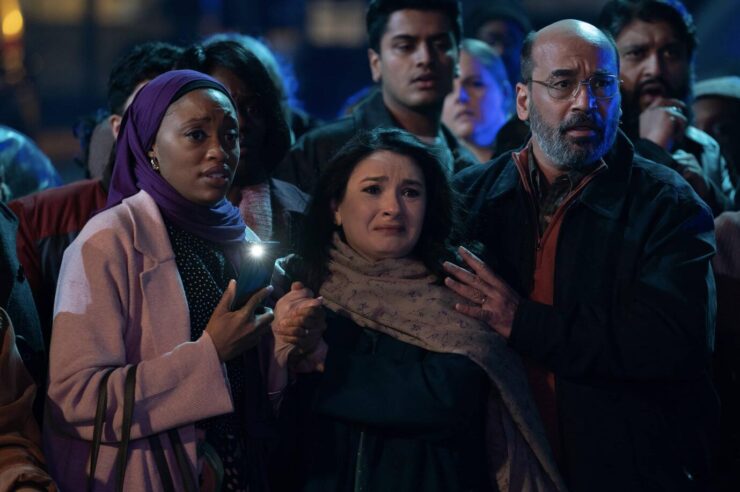 Suddenly, the DODC infiltrates the high school, so Kamala and her friends put their game plan into action. It’s always fun watching teens outwit adults. Zoe records a live vid for her vast following, which makes the rounds on social media and even reaches Kamala’s parents. Soon, we see a horde of folks gathering outside the school because of Zoe’s livestream.

Amid all the Home Alone-esque hijinks, Kamala and Kamran share a moment while hiding from the DODC. They lock hands, and we see their powers activate and combine in a stunning display. As they lean in for a smooch, Bruno enters, urging them to run while he distracts the DODC.

Unfortunately, after Kamala and Kamran depart, the DODC arrests Bruno, Aamir, Nakia, and Zoe. Kamran is reluctant about seeking shelter with the Red Daggers, citing the decades of conflict between the ClanDestines and Red Daggers.

Kamran finally learns about Najma’s death from Kamala, turning the tables at this point. While Kamran doesn’t become an outright villain (that designation could be ascribed to Deever and her team), he poses as an antagonist to Kamala for a hot minute. He lashes out at the DODC officers to keep them at bay, but Kamala tries to shield them.

Kamala and Kamran head outside to find the swelling crowd, which includes her parents, Tyesha, and Sheikh Abdullah. Deever and her team try to shoot Kamran. Thankfully, Kamala swoops in with a shield to protect them both. 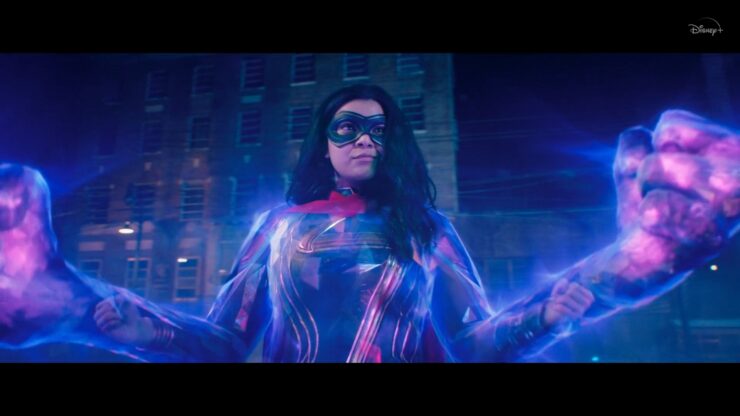 During the confrontation with the DODC, Kamala unlocks a new facet of her powers — she can “embiggen” just like she does in the comics! Kamala persuades Kamran to stand down when he unleashes a surge of unrelenting energy that puts the bystanders in harm’s way. Kamran doesn’t know how to “act normal” after receiving these abilities. He also believes organizations like the DODC will never stop hunting them. They’re outcasts, clinging to the periphery of society. 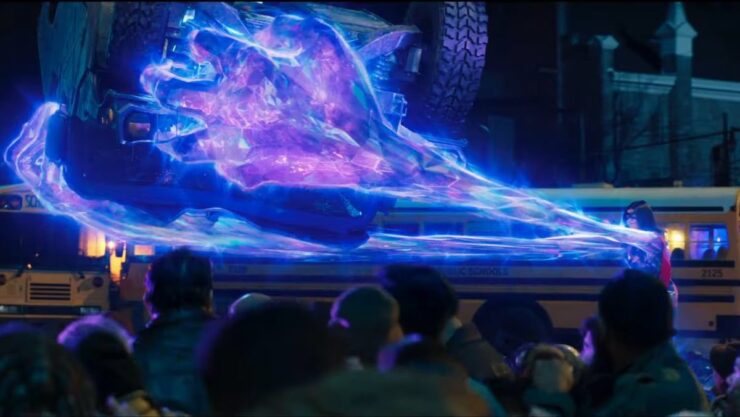 Thankfully, Kamala punches a hole in the ground for Kamran to escape while she distracts the DODC. After he flees, we see the DODC descend upon Kamala, but the crowd swarms around her instantly, including everyone from Kamala’s friends and family to the police. They view Kamala as a bona fide hero. An irate Cleary calls Deever to relieve her of her duty after she disregards his command.

A New Hero Is Born 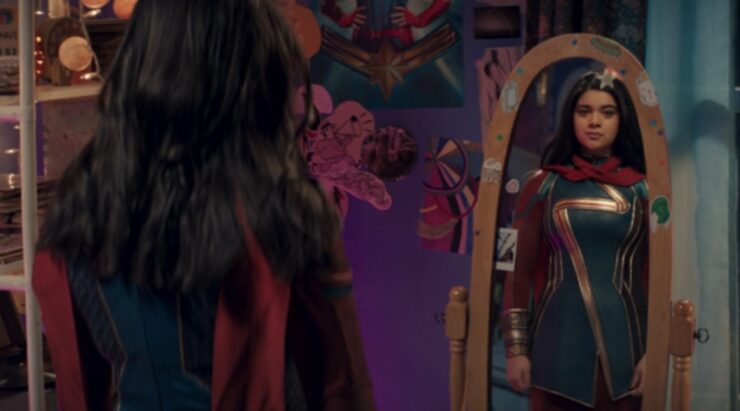 Kamala escapes the DODC as we see a flurry of social media posts gushing about Night Light’s latest super hero escapades. She savors her victory, and Yusuf joins her for a father-daughter chat on the roof of their house. While discussing her super hero name with Yusuf, a montage plays out with Aamir relaying his heroic exploits during the DODC battle to Muneeba and Tyesha as well as a cameo from Kamala Khan comics creator G. Willow Wilson. In addition, we watch while Bruno slips a note in, presumably, Kamala’s locker. He sports a Caltech hoodie.

Back on the roof, Yusuf explains the meaning behind Kamala’s name. He informs her that “Kamal” in Arabic means “perfect.” However, in Urdu, the translation is more akin to “wonder” or “marvel.” Yusuf refers to Kamala as the family’s own “Ms. Marvel.”

Inspired by her dad’s words, Kamala takes to the skies, perching atop a street light overlooking the Hudson River. She shares a name with Carol fricking Danvers!

Fast forward one week later. Bruno drives Kamran’s plush car and picks up Kamala and Nakia. Bruno is preparing to leave for the Early Immersion Program at Caltech. He imparts a discovery he made while checking, at Aamir’s behest, to see if the Noor gene appeared for the whole Khan family. But he found something peculiar regarding Kamala’s genes — a “mutation.”

If you listen closely, when Bruno says “mutation,” you can hear the melody from the X-Men: The Animated Series intro. What could that mean? Kamala’s not too concerned about the mutation thing. She feels it’s merely another label.

Thankfully, the finale boasts a surprising mid-credit scene. We see Kamala lying on her bed. Suddenly, the bangle on her wrist pulsates with energy. A peculiar light emits from it, enveloping Kamala in a shape we haven’t seen yet. The explosion sends Kamala flying through her closet door.

Then, Carol fricking Danvers emerges. We see the same purple light from Kamala’s bangle dancing on Carol’s hands. She surveys her surroundings, utterly bewildered by the plethora of posters featuring her face all over Kamala’s walls. Carol mutters, “Oh, no,” and quickly flees.

What does all this mean for the MCU?

Firstly, let’s talk about the “mutation” in the room and the theme music accompanying it. We already saw Sir Patrick Stewart reprise his role of Professor Charles Xavier in Doctor Strange in the Multiverse of Madness, so the MCU is definitely preparing to introduce the X-Men. Bruno mentioning that Kamala’s genes present a mutation solidifies the mutants’ introduction into the MCU narrative.

Of course, in the comics, Kamala’s powers spawn from the Terrigen Mist, which causes a mutation and alters one’s biology. So, you could argue that Kamala perhaps came into contact with the Terrigen Mist, thus keeping the Inhumans’ mythology intact. After all, Black Bolt was also in Multiverse of Madness. Admittedly, both of these explanations are plausible — the “mutation” line can serve as a hint toward the arrival of the X-Men while maintaining the Inhumans storyline.

The mid-credit scene leading into The Marvels is a brilliant detail, especially since Monica Rambeau’s final scene in WandaVision finds her interacting with a Skrull regarding an intergalactic mission. It’s a wonderfully cohesive way of intertwining Kamala, Monica, and Carol’s stories for their shared adventure. Fan theories are already blazing across the internet, hypothesizing that maybe Kamala’s bangle is even tied to the Kree Negabands, which allow users to switch places.

Overall, Ms. Marvel was a fun time and a delightfully whimsical palette cleanser from the intensity of the series preceding it. While it’s inexplicably polarizing on social media for not being as action-heavy as some shows, it’s clear that Kamala’s identity is entwined with her family and heritage. The “good vs. bad” narrative is secondary to Kamala discovering who she is, connecting with her family, and healing intergenerational trauma.

What was your favorite moment from “No Normal?” Join the conversation alongside other Ms. Marvel fans in the Let Your Spoiler Sideshow Facebook Group, and don’t forget to Let Your Geek Sideshow!

Marvel Comics: Who Are the ClanDestine / Djinn?