In November of 2021, DC Comics released the hardcover collection of The Other History of the DC Universe. The book is written by Oscar-winning writer John Ridley (12 Years A Slave), with art by Giuseppe Camuncoli and Andrea Cucchi, colors by José Villarubia, and letters by Steve Wands.

In five volumes, the book explores some of DC’s most iconic moments: the formation of the Justice League, the death of Superman, Batman forming the Outsiders, and even Gotham’s No Man’s Land arc. The twist, and the beauty, is that these events are shown through the eyes of some of the company’s lesser-known characters from underrepresented backgrounds, such as Black Lightning, Katana, and Renee Montoya. 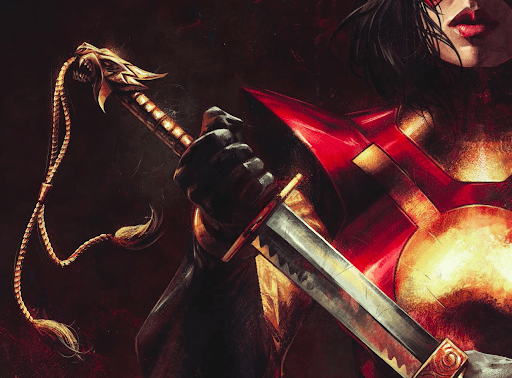 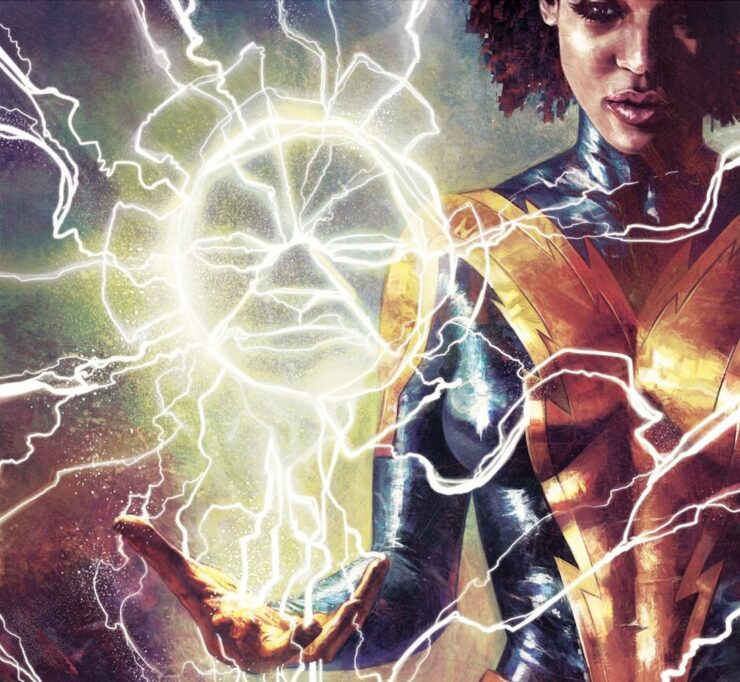 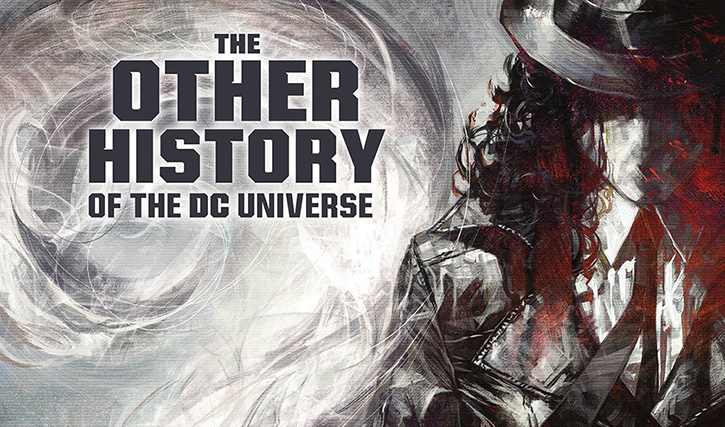 The hardback collects all five volumes of Ridley’s run. Each volume tells the story of a different hero during a different period in American history. Volume 1 covers 1972-1995 from the point of view of Jefferson Pierce, AKA Black Lightning. Next, Volume 2 is from the perspective of Karen Beecher-Duncan and her husband Mal Duncan, both of whom are former Teen Titans. They explore their lives from 1970-1989.

Volume 3 is a departure from the rest of the volumes as it marks the first and only time that the narrator isn’t American. Tatsu Yamashiro, or Katana of the Outsiders, describes life in America during the ’80s, a time when anti-Asian sentiment was high. Volume 4 is yet another departure — Renee Montoya is the series’ first gay narrator, and her story covers the late ’90s and early 2000s. In her journey, Renee faces the consequences of assimilating for success, while in the process having to contend with her queer Latinx identity.

Finally, the last volume, centered on Dr. Anissa Pierce, AKA Thunder, furthers the conversations happening around the Don’t Ask, Don’t Tell policy, the fight for gay marriage rights, and the election of President Obama. Volume 5 brings the story full circle, as Thunder is also Jefferson Pierce’s eldest daughter. She describes her life as a gay Black woman in the years spanning 1981-2010.

Art Styles to Reflect the Heroes The book itself is as beautiful to look at as it is easy to read. The art tells the story as much as the words do — a must for a work in this medium, obviously — but it does so in more ways than just the actual imagery. The art style in the beginning of the book looks very 1970s; the colors are vibrant and bright, and the illustrations look old school. When we get to Renee Montoya’s story in Volume 4, the colors lose their vibrancy. They’re muted (much like Renee), as if the grime of Gotham City reached through the pages to tarnish them the same way it tarnishes its residents.

The shapes in the art sometimes help tell the story too. Boxes of text molded to spirals in the illustration guide your eye in the right direction despite the fact that things are going the wrong way. It’s clever at times, but never disorienting or detracting from the words themselves. The art and the words complement each other well. There are less than a handful of places where there’s any uncertainty about which narration is the correct one to read next. 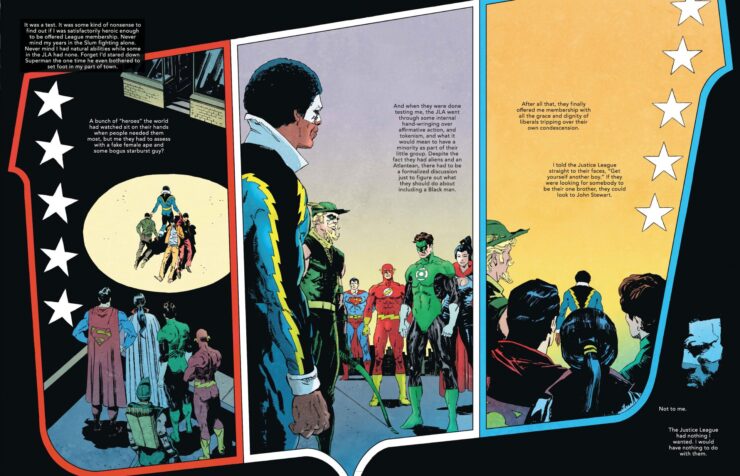 It’s not a perfect book though. There is enough overlap in most of the volumes that the collection feels like a whole; finishing all five books feels like finishing a complete story. But the individual volumes often seem disjointed. Rather than feeling like each volume of the collection tells its own story, it sometimes seems like each page of the volume tells a story and you’ll read a new, possibly related one on the next page.

The first volume from Jefferson Pierce’s perspective reads this way in its entirety. By the end, though, the issue eventually resolves, as if Ridley struggles to find his stride at first and then slowly figures things out. Interestingly, the problem becomes evident once again in the final book about Dr. Anissa Pierce, Jefferson’s daughter. Perhaps in trying to tie Jeff’s story to his daughter’s, Ridley fell back on the same style of storytelling that he employed in the first volume to what is, unfortunately, the detriment of both.

In both volumes, Jeff or Anissa will relay a story and, at the turn of a page, move on to a completely new one with no indication of how it relates at all to the one preceding it. Rarely do any of them come up again for any sort of context or closure. The lack of transition is jarring and pulls you out of the narrative, though this doesn’t happen in Volumes 2-4. Perhaps, then, the rapid cuts are deliberate choices for the Pierces, made by a writer who has spent much of the last few years creating for film and television where the sudden shifts in perspective aren’t quite as disorienting. 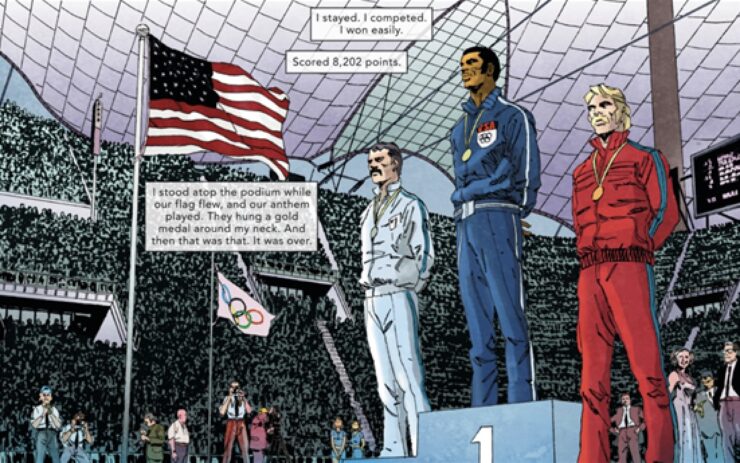 What makes the book interesting is that Ridley uses real historical events as context for each character’s story. This grounds the entire narrative and makes it feel even more real, helping to contextualize the choices of these characters. With historical background, readers understand why they describe their experiences of teaming up with their better known super hero coworkers the way that they do.

Jefferson Pierce describes the creation of the Justice League within the historical context of the Watergate scandal and America’s retreat from the Vietnam War. It’s no wonder, then, that he sees the group of all white, mostly male superheroes as propaganda, a distraction from how the country’s reputation is suffering worldwide.

America in the ’80s was mired in anti-Asian sentiment as an irrational fear response to the rising domination of Japanese culture and economy throughout the world. Thus, it makes sense that Tatsu feels othered by Batman’s decision to name his newly formed super hero group – a group featuring minorities, immigrants, and a “genetic freak” – Batman and the Outsiders.

In the early ’90s, Black tennis champion Arthur Ashe contracted AIDS – still known as “the gay disease” – from a blood transfusion. Where nearly twenty years before he’d been a cultural icon, his dying days saw him defending himself against rumors and suggestive questions about how he caught the disease. Renee Montoya, a woman who is actually gay, sees the vitriol with which this former hero is met and decides it’s safer to bury herself even deeper in the closet. She’s outed by Two-Face in 2004 as a means of turning everyone in her life against her at a time when the President of the United States was running for re-election on the promise of amending the Constitution to ban gay marriage.

It should be mentioned that Ridley doesn’t demonize any of the more well-known characters – the point isn’t to make DC’s major heroes The Bad Guy™ but instead to provide some new perspective. He simply takes iconic DC characters off their pedestals and asks readers to look at them more closely, from a new angle.

The Power of Perspectives 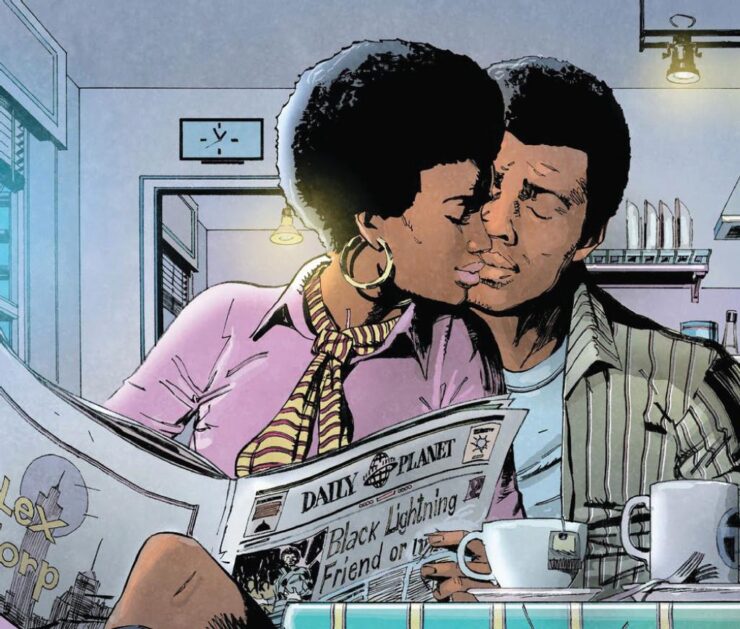 Volume 2 is interesting because it is the only time in the run that Ridley uses two characters, Bumblebee and Mal, to tell one story. The married couple covers American history from 1970 to 1989 as it relates to their history — with each other and with the Teen Titans. The dual, and sometimes opposing, perspectives in regard to the same events demonstrate something that the collection as a whole does quite well. It shows that minority groups are not monoliths. Karen and Mal sometimes view the same event in completely different ways, despite both being Black.

In the same respect, Jefferson and Mal are both Black men who had similar experiences growing up, yet they’re dramatically different characters. Jefferson is hard and aggressive and proud of it, while Mal is much more reserved. By the end of the book, Jefferson is even a bit unlikable. What’s important about this is the acknowledgement that that is okay. Katana, for example, is a good character with a gripping story but maybe not the best person considering her cavalier attitude towards taking lives.

Likewise, Renee Montoya struggles to reconcile her family, her religion, and her sexuality, but she’s also a drunk and an adulterer. She’s a fantastic, rounded character but, in her own words at the beginning of Volume 4, not a good person. This is exactly what proper representation is though, and it’s why The Other History is so interesting and so important. The characters are human; they are allowed to have flaws and shortcomings without becoming stereotypes or tropes.

For people who see themselves represented in the six narrators, The Other History of the DC Universe feels validating. For everyone else, the value of the chance to see our world and DC’s through several new pairs of eyes cannot be overstated.

John Ridley provides an alternate DC history that feels just as gripping and important as the one that everyone already knows, and for that, even despite its flaws, the collection is well worth the time and the money spent on it.