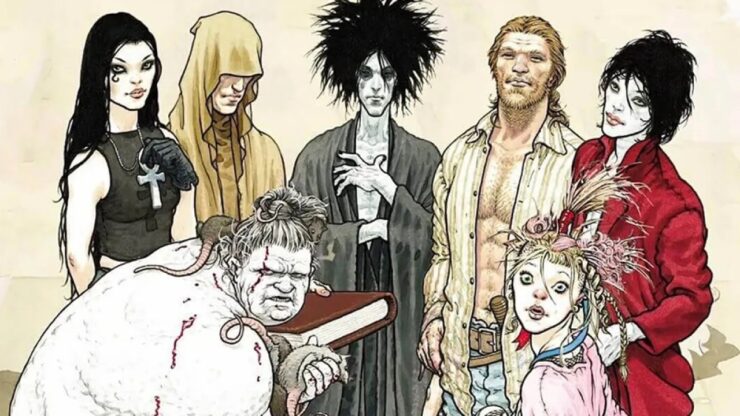 The Endless are anthropomorphic embodiments of various natural forces and emotions. Children of the cosmic entities Night and Time, the Endless resemble human beings. But they are far from human. Still, they regard themselves as a family. Although they live separately in their own realms — over which they are sovereign — they still regularly meet.

They also each possess a gallery containing the symbols and sigils of their siblings. Through these symbols they are able to travel to each other’s realms. Dream is also in the habit of summoning the Endless without their permission using their portraits. For this and many other reasons, the Endless don’t exactly get along. Below, get to know each of them and explore these characters’ dysfunctional dynamics. Dream is the protagonist of the Sandman series. Temperamental and arrogant, he often acts as though he is “above” all the petty squabbles between his siblings. Yet he also participates in their challenges because he, for the most part, can’t stand to lose. However, Dream is open to change. His 70-year imprisonment at the hands of mortals makes him more amenable and altruistic. When Death ridicules him for a past error involving imprisoning a lover, he at first fights back but ultimately relents. Then he decides to fix his mistake.

Of course, Dream enjoys his power as lord of The Dreaming. He knows he is strong. Confident and charismatic, Dream is often a few steps ahead of his enemies. He respects those like Lucifer, however, because they can keep up with him. And he has a soft spot for his sister Death. Ultimately, he has a tough exterior as well as a cold interior — with a little love tucked away, shining through on rare occasions. 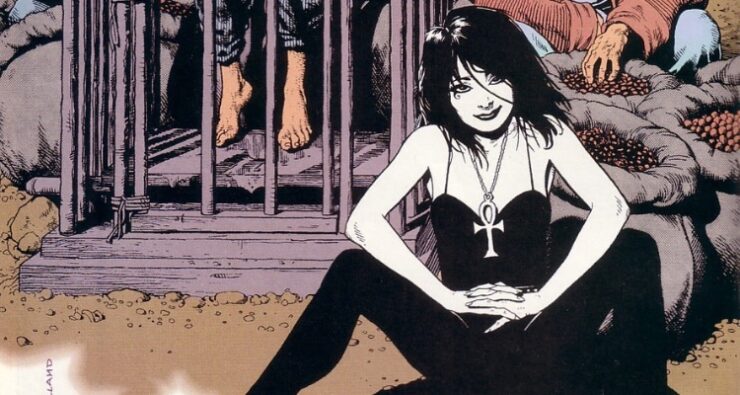 Death is the most cheerful of the bunch. Her realm is both nameless and essentially unexplored. As her title suggests, she carries the dead to their final resting place. And she does so with a smile on her face, a heart of gold, and a loving embrace. While her work can get quite gruesome, Death never loses her optimistic outlook on existence.

To many mortals, Death looks like a typical goth girl. Her attitude and appearance suggest youth. But don’t mistake this for weakness or naivety. When Dream is captured by practitioners of dark magic, the group expresses disappointment that they are unable to snare Death. Dream explains to them that they are exceedingly lucky that they did not summon his far more dangerous sister.

Insatiable. Invasive. Desire is a cunning and manipulative member of the Endless. They are genderless. Appearing in the form the viewer most covets, Desire can easily bend anyone to their will. They enjoy toying with their siblings, messing with the family plans, and tormenting humans. No one can really predict how, where, or why they will strike next.

Their realm, The Threshold, is an immense castle shaped like Desire themself. It is here that they come up with grand schemes to disrupt the natural order. Or to simply amuse themselves and bother the other Endless. Thus the self-centered Desire is a secondary antagonist throughout the Sandman comic series. Desire’s younger twin, Despair, is their opposite in every way. Despair is the pessimist of the family. She is insecure, forgetful, and easily manipulated. Drawn to darkness, and unable to escape her depression, she prefers the company of rats. She also wears a hooked ring on her finger. Whenever she is distressed, she uses the ring to cut the flesh on her face and chest.

Despair dwells in The Gray Realm. This place is covered in dense fog, as well as numerous floating mirrors. Mortals look into these mirrors from their own homes, and Despair stares back at each of them. In her sunken eyes they find only hopelessness. No one knows why or how Delight became Delirium. But the girl who always smiled one day became an unstable teen capable of great mood shifts. Sometimes she gains lucidity. Sometimes she flies into fits of uncontrollable sadness or rage. Her thoughts are flighty, and she voices her thoughts and opinions in what could be interpreted as nonsense words.

The Endless are quite protective of Delirium because she is the youngest member of the family. Additionally, her madness makes her extremely vulnerable. Her realm is a maelstrom of vibrant colors which is near-impossible to navigate. Delirium is also constantly shifting her appearance, especially her hair, which can be long and unruly one day and shaved the next. Destiny is the oldest of the Endless. He is solemn and ponderous. Although he is extremely powerful and knowledgeable, he quietly keeps to himself and lives with the burden of his foresight. Chained to his wrist is a book in which the fate of the world is written. Even if his siblings are mentioned, he does not tell them what is going to happen.

Fittingly, Destiny’s realm is The Garden of Forking Ways. This sprawling hedge maze represents one’s choices and journey during life. Although Destiny is blind, he can “see” and navigate his realm with ease. At the center is his castle. When the Endless meet, Destiny usually hosts them here. Destruction was once boisterous and jolly. The muscular redhead was a warm addition to the family, closely resembling his little sister Delight in looks and personality. But like Delight, things changed. Destruction left the family. Since then, he has little to no contact with his siblings. He is also the only one of the Endless who has sought out their purpose. In his opinion:

This declaration that the Endless do in fact have an end in sight does seem antithetical to their very existence. But their connection to Night and Time contributes to this theory. The Endless, since they are not gods, can survive beyond humanity. Yet if the universe collapses, do they cease to function along with it? Such wonderings contributed to Destruction abandoning his family. He doesn’t believe they should ever interfere with mortal lives. His siblings, of course, completely disagree. Therefore we have the dramatic story that is The Sandman.

Who is your favorite sibling in the dysfunctional family known as The Endless? Connect with other DC Comics fans in our Local Comics Society Facebook Group, and don’t forget to Let Your Geek Sideshow!