The holiday season is upon us! If there’s one universal tradition we all should share, it’s watching copious amounts of holiday-themed TV episodes. There’s nothing like getting cozy under a blanket with a steaming cup of hot cocoa, queueing up your favorite festive episodes, and feeling a wave of warmth wash over you.

So, to help you get into the spirit, here’s a list of 16 holiday TV episodes that’ll leave you feeling festive. Warning: After watching these, you might find yourself inexplicably roasting chestnuts on an open fire while Jack Frost nips at your nose. 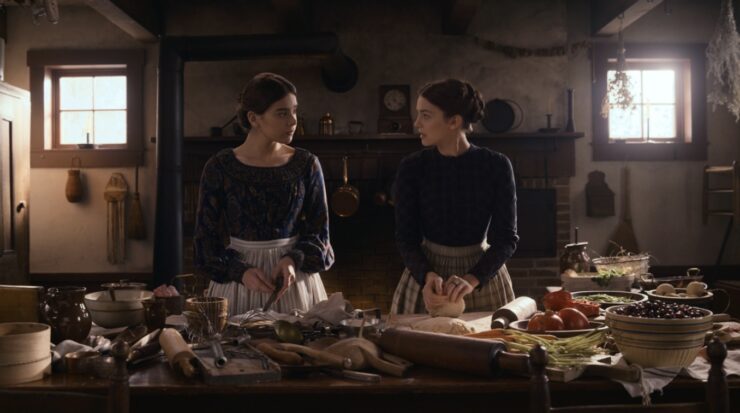 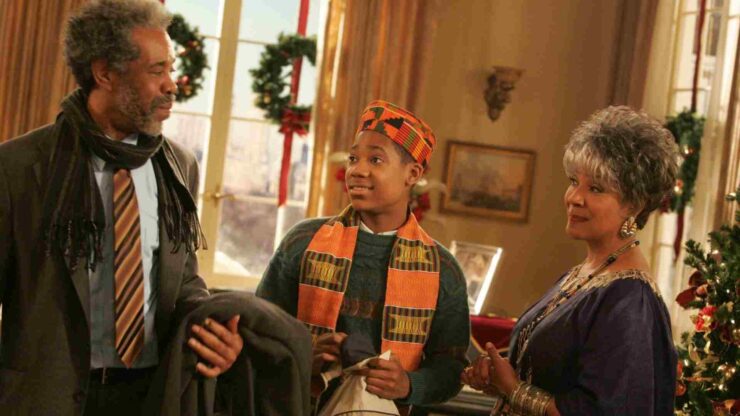 In the “Everybody Hates Kwanzaa” episode of Everybody Hates Chris, the family celebrates Kwanzaa for the first time. Julius persuades them to forgo Christmas in favor of Kwanzaa because he’s upset about materialism and rampant consumerism (well, we later learn Julius was upset because he didn’t receive his Christmas bonus). 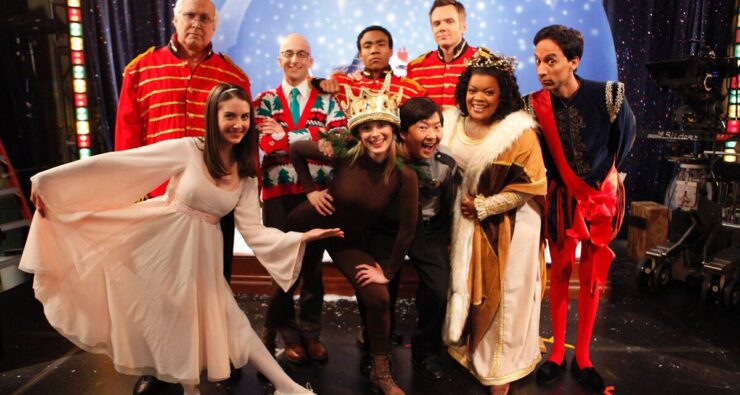 Community boasts a handful of solid holiday episodes, but “Regional Holiday Music” sits pretty at the top of the list as my favorite. It’s a masterful spoof of Glee, tossing our study group into a frenetic and clever musical episode. No, they aren’t in claymation form in this one, but The Greendale Seven spread good cheer, the importance of “glee,” and never clarify what “regionals” are. Glee is the gift that we need! 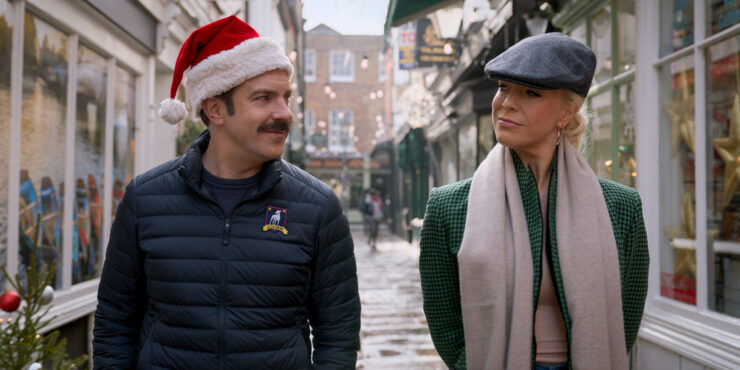 Ted Lasso is, undoubtedly, one of the most wholesome shows with unexpected depths on TV. So, it’s a given that Apple TV+’s most popular series would get a holiday episode. In “Carol of the Bells,” Rebecca and Ted take a turn for the benevolent when they hand out gifts to strangers. Higgins celebrates Christmas with the Greyhounds. Roy and Keeley embark on a mission to learn why Phoebe’s breath smells, one that spans the whole of London. It’s poignant, sweet, and a stark reminder that you get to pick your family.

Side note: Hannah Waddingham can sing! 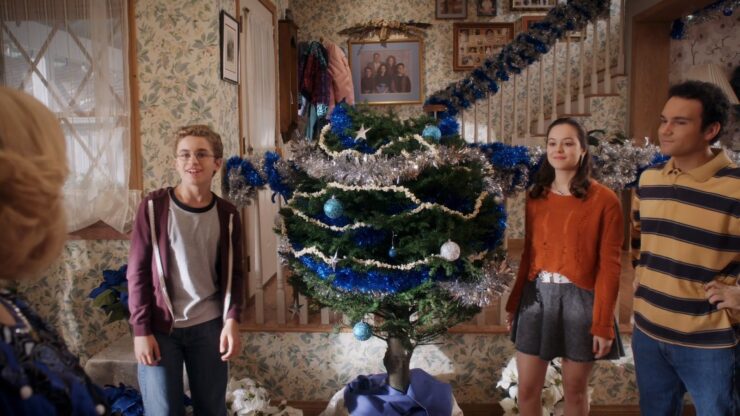 Make way for Super Hanukkah, folks! If anyone could crush a Hanukkah-themed episode, it would be The Goldbergs. In “A Christmas Story,” Beverly creates Super Hanukkah to get her family in the holiday spirit, but it’s alarmingly similar to Christmas. There’s a Hanukkah bush, Chinese food for dinner, and a bevy of decorations.

Meanwhile, Adam feels jealous over Barry’s disinterest in hanging out with him, so he “triple-dog dares” his brother leading to unexpected results. Not to worry, this episode is, as Adam Goldberg says, “bigger than Jesus.” 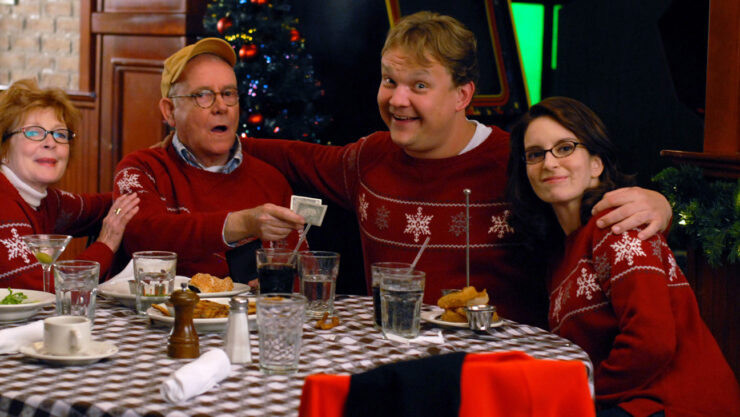 30 Rock never fails to provide on the themed episode front, and “Ludachristmas” is no exception. It should rank as one of the show’s best outings for Elaine Stritch’s appearance alone. What do you get when you combine the unwavering optimism of the Lemon clan with the snarky pessimism of the Donaghys? A tongue-in-cheek, delightful, and wholly NYC Christmas celebration. There ain’t no party like a Liz Lemon party! 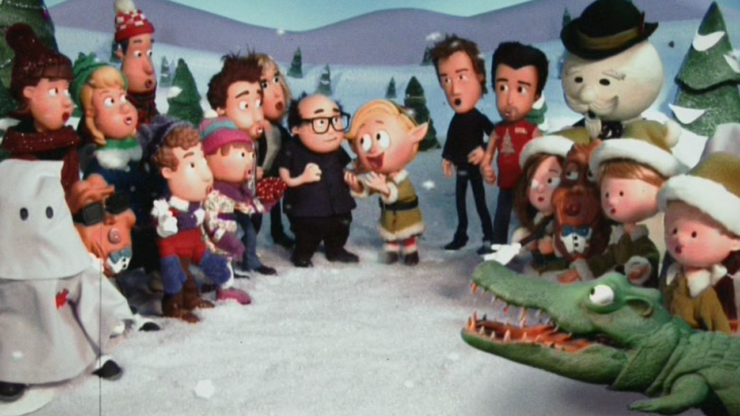 It’s Always Sunny in Philadelphia isn’t known for heartwarming tenderness or family-friendly themes, nor is it known for character growth. The Paddy’s Pub gang has never evolved over the past 16 years, and that’s okay. A holiday-themed episode seemed implausible, but “A Very Sunny Christmas” is depraved, crude, and blisteringly funny, complete with an appropriately explicit Christmas song complemented by violent animation. Would you expect anything different from this show? 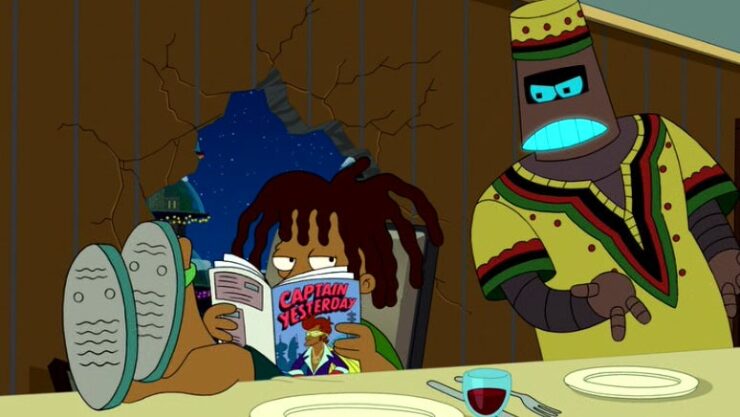 Only Futurama could spew forth a robot for everything, and the holidays are no exception. “The Futurama Holiday Spectacular” tells three separate holiday-themed stories: X-Mas, Kwanzaa, and Robanukah. Kwanzaabot travels the globe, doling out Kwanzaa literature and giving everyone the lowdown regarding the holiday. Hermes Conrad’s family celebrates Kwanzaa, and he invites the Planet Express crew, the Globetrotters, and Kwanzaabot to his home for the festivities.

However, as is Futurama‘s modus operandi, things go awry, sending our heroes on a journey to find beeswax for the kinara candles. It’s hilariously delightful. 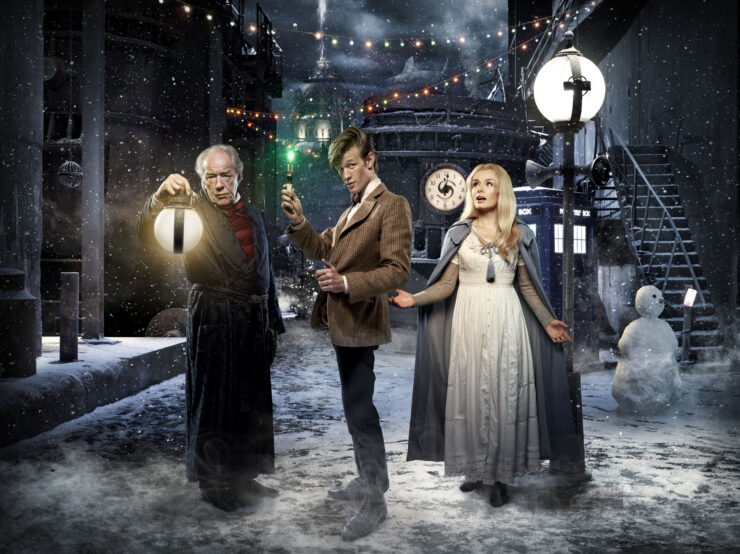 Doctor Who and holiday episodes are synonymous — you can’t have one without the other. “A Christmas Carol” serves as the Eleventh Doctor’s first Christmas outing, and it’s as magical and enthralling as a giant blue phone box. The Doctor’s only chance to rescue Amy and Rory is by saving the soul of a curmudgeonly miser, Kazran Sardick. It’s chock full of stunning visuals, Christmas cheer, timey-wimey stuff, and the Eleventh Doctor’s unadulterated charm. 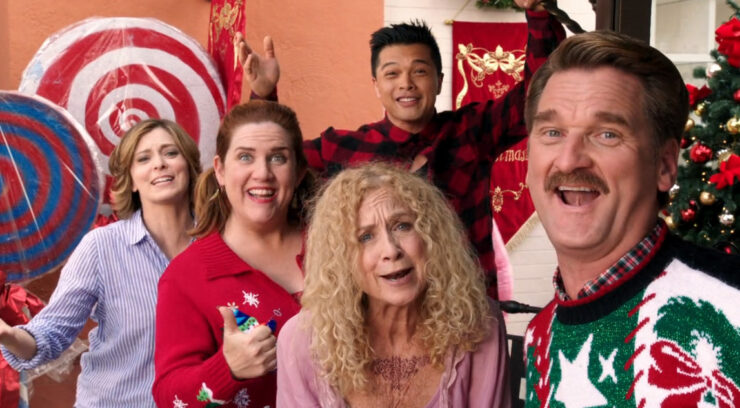 It’s Hanukkah in Crazy Ex-Girlfriend‘s “My Mom, Greg’s Mom and Josh’s Sweet Dance Moves!” and Rebecca’s passive-aggressive mother decides to visit her in West Covina for the occasion. Perpetually eager to please her mom, Rebecca exaggerates some crucial details about her life on the West Coast, but the truth comes out at a holiday shindig. Meanwhile, Josh endeavors to recapture his dancer glory, and there’s no better place to do that than a musical comedy series.

Of course, it’s your standard Crazy Ex-Girlfriend fare with plenty of singing, dancing, and biting humor, with a smattering of holiday magic. 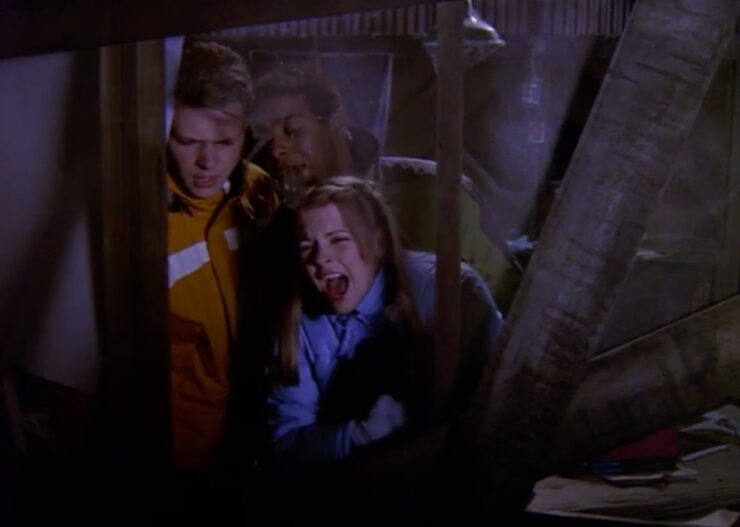 Sabrina the Teenage Witch is a guilty pleasure show of mine, and perhaps that’s because I watched it quite a bit while growing up in the ’90s. Undoubtedly, it’s corny and the epitome of cotton candy fluff, but that’s part of its charm.

“Ice Station Sabrina” finds Sabrina and Harvey embarking on a snowy ski trip that takes a turn for the complicated when they get stuck in a snowstorm with Brad, a witch hunter. It’s a lighthearted little winter-themed episode. Let the ’90s sitcom shenanigans commence! 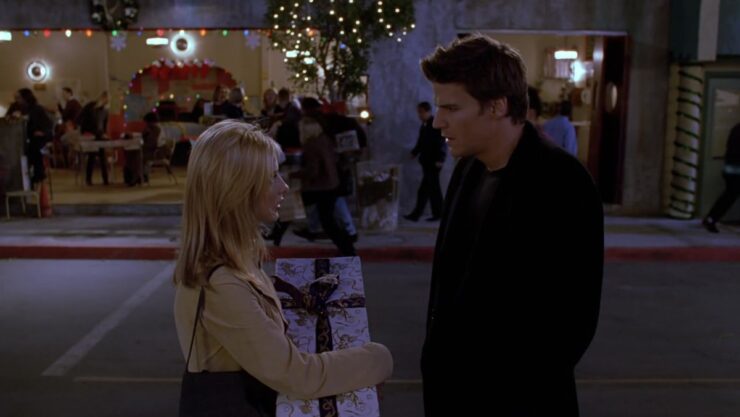 Buffy the Vampire Slayer‘s “Amends” might not be as wholly heartwarming as the other entries on this list, but it deftly explores the darker side of the holiday season, the depression that some feel amid this time of year. As for the Buffyverse, this episode introduces us to The First, an all-powerful villain playing a vital role in the rest of the series. Angel wrestles with his inner demons, Willow and Oz give it another go, and Xander comes to terms with Cordelia’s absence. Sure, it’s painful and moving, but Buffy‘s signature biting humor is present throughout. 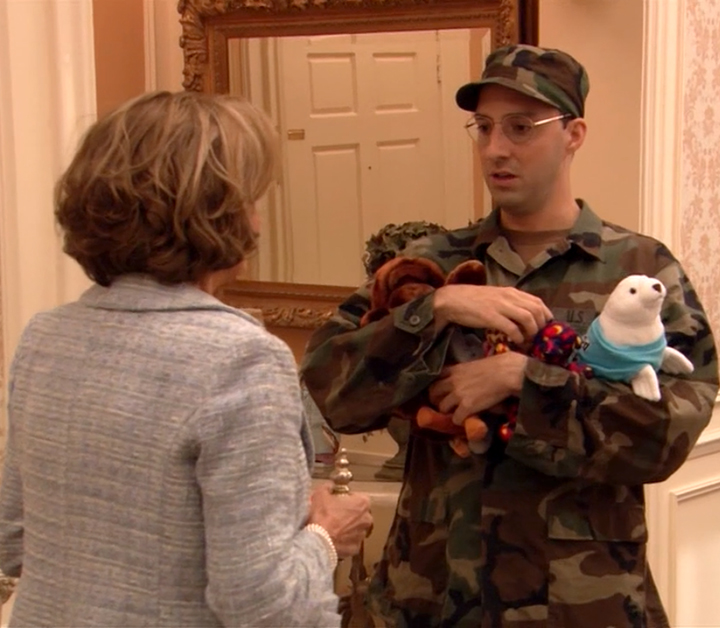 This episode of Arrested Development, “Afternoon Delight,” boasts one of my favorite scenes in the show: Michael and Maeby’s karaoke session. Watching them sing that song together, as uncle and niece, is comedic gold. The Bluths host the annual Christmas party while Buster avoids going to “Army” for the day by hanging around the arcade. But look at all those awards he won from “Army!” This episode is sharp, hysterical, and filled with top-tier performances. 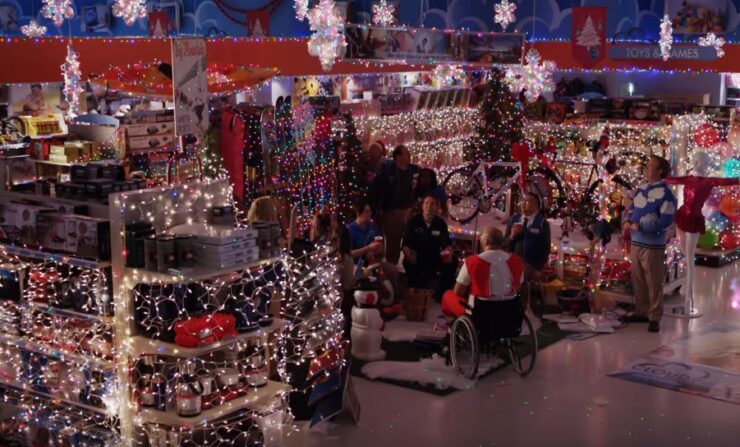 Like most sitcoms, Superstore knows its way around a holiday-themed episode. “Christmas Eve” blesses us with unbelievably drunk Amy, Glenn instilling the magic of Christmas in Mateo, Jonah venturing on his first date with Kelly, Dina drop-kicking “Baby Jesus,” and motor scooter fun. It’s a solid Superstore outing and a delightful, magical romp.

Tacoma FD isn’t a profound series by any means, but it is one you switch on when you want your brain to switch off. Its charm lies in its whimsy and slapstick humor. “A Christmas Story” plays on A Christmas Carol, with Eddie morphing into an Ebenezer Scrooge-type character while he bemoans Christmas. The rest of the crew tries to get him into the holiday spirit, but only Chief has the cure for what ails him — a bidet. If laughs and a simple storyline are what you crave, look no further than this episode.

Honorable Mention: Wynonna Earp 3.6: “If We Make It Through December” 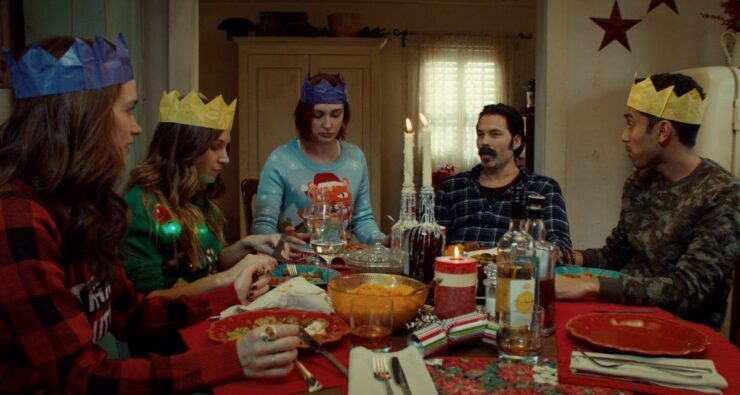 Purgatory boasts plenty of excitement and danger all on its own, but throw in the holiday season, and you’ve undoubtedly got a memorable Christmas. Wynonna Earp‘s “If We Make It Through December” finds the Earp sisters spending their first holiday with their mother in years. Wynonna befriends the hot fireman Charlie, and Waverly learns more about her father. This episode explores family (blood and found) and all the pain and joy that comes with it while tinged with bittersweetness due to a fallen friend.

What are your favorite holiday TV episodes? Tell us over in our Atomic Misfits Facebook Group, and don’t forget to Let Your Geek Sideshow!