The dark fantasy world of Court of the Dead is rife with diverse ideologies, complex characters, and increasingly murky motivations. It is driven by secrets, lies, and betrayals at every level, from the most unassuming of mourners — denizens of the Underworld — to the lofty heights of the Court. Some are be driven by good, and some by evil, all working either for personal gain or the larger goal of unity. This is how every story goes.

In the capital city Illverness, Death, also known as the Alltaker, fashioned and found beings to become the Court of the Dead. And although they were created and gathered by the same hand, they and their own ambitions can be separated into three factions — Bone, Flesh, and Spirit. Here we will explore the philosophies and identities of those who follow the path of Bone — and how the mysterious dreadsgrip may corrupt the well-meaning intentions and ideals held by members of the sternest faction. 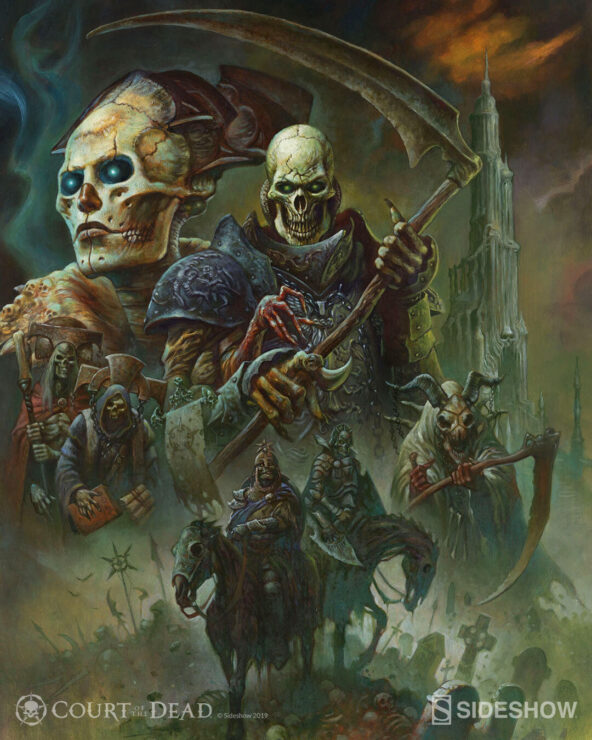 Above all, Bone Faction desires order. They are a structured, organized group that values analytical thinking over emotional impulse — often to a fault, which can make them seem cold and apathetic to others. Many of them practice osteomancy, which is less magical and more an exact science. It is a reality-altering alchemy and an act of creation, augmentation, and protection. Followers of Bone make excellent mathematicians and engineers. If a mourner belongs to the Bone Faction, they are a problem-solver, planner, and a great thinker.

This is not to say these disciplined mourners are unfeeling or uncreative. Despite sharing overarching beliefs and characteristics, their personalities and the way they interpret the path of Bone vary, and the influence of other factions cannot be ignored. Below, let’s meet some of the main members and learn how they represent the Bone Faction. 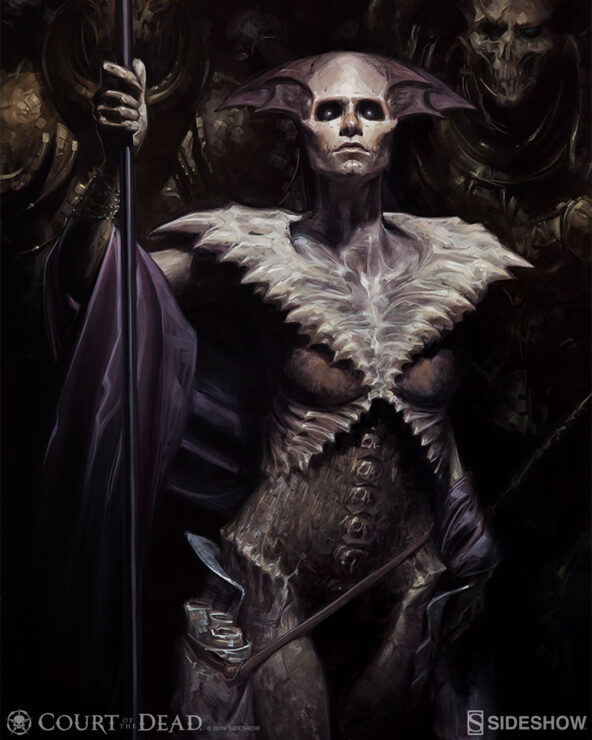 With a dogmatic adherence to tradition, Xiall stands as the proud and logical leader of the faction of Bone. She is certain her single path is the true path, the one that will keep the Underworld safest during the Celestial War. The highest administrative authority of the Underworld, Xiall is also the Chancellor of the Council of Osteomancy.

Xiall leads with wisdom and dignity from behind the fortified walls of Voxxingard, the Bone Faction’s stronghold. She adheres most strictly to ancient Bone principles, keeping a rigid, white-knuckled grip on tradition and purging all emotional weakness from herself. With Xiall’s might, knowledge of arcane arts, and unwavering will, Illverness will be preserved — though many whisper that if she has her way, Illverness will succumb to a restrictive rigidity so that Xiall may see it rise to its highest potential. 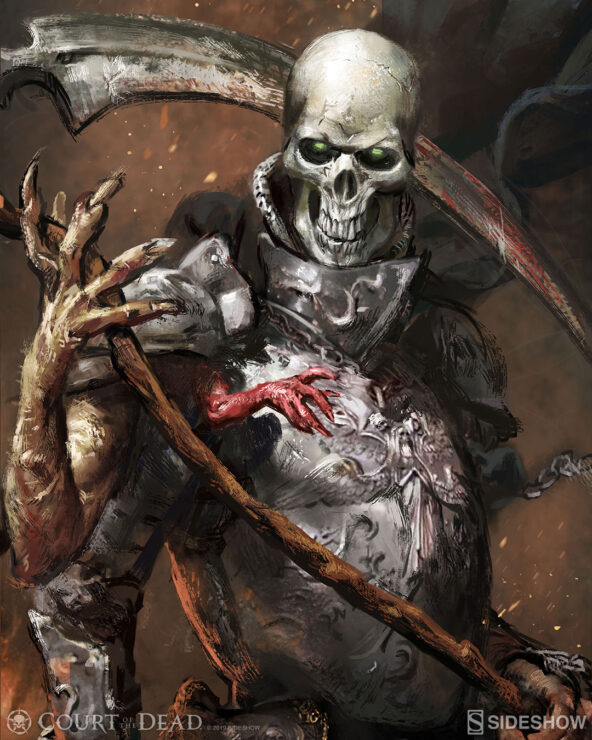 The stalwart and resolute Reaper General Demithyle achieves his goals in life and on the battlefield with strategic precision. He is a Mortis Knight who possesses inward sight, a gift which presents him with whispers of wisdom gathered from many mortal lifetimes. A determined and efficient warrior, Demithyle constantly strives to uphold his duty to Death and the Underworld.

Curiously, Demithyle uses his smallest arm for the heavy task of harvesting mortal souls. Due to its short reach, this leads him to come face to face with humanity, giving their lives proper respect as he looks them in the eyes. He doesn’t want the act of harvest to become a routine or mindless tithe to the Celestials, and rather pointedly gives each death meaning and emotion — a trait we see more often in those aligned with the Flesh Faction.

To learn more about the exalted Mortis Knight, be sure to read Court of the Dead: Rise of the Reaper General. 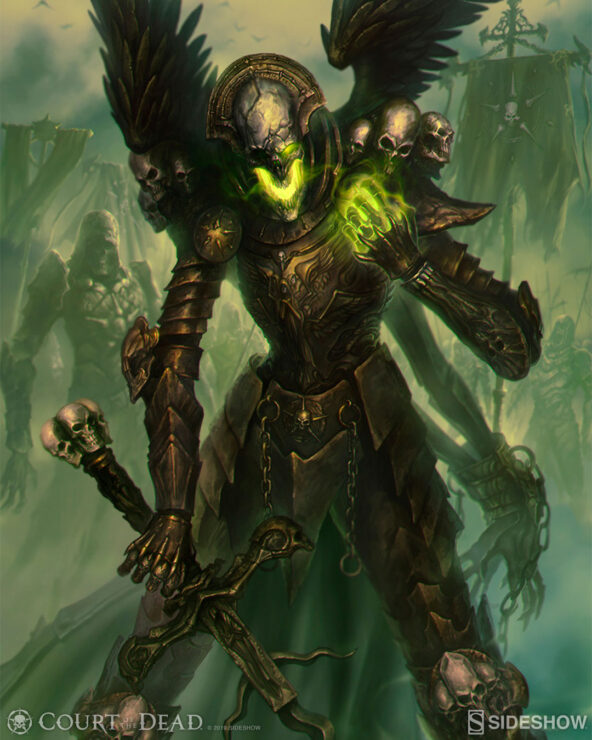 A young, ruthless soldier, Risen Reaper General Mortighull tends to enter battle with more ambition and impulse than is typically seen in his faction. There is a constant war within himself — he attempts to reconcile an obligation to defeat Heaven and Hell with an independent impulse for achieving darker, terrible deeds. He also finds thrill in combat, never treating his role as a simple, standard job. His boundless confidence is not, however, unearned.

Mortighull is extremely compassionate toward the mortal souls unwillingly drawn into the Celestial War — compassion which is most closely associated with the fostermurden of the Spirit Faction. He relishes combat yet desires peace to mitigate their suffering. With one part of him telling him to destroy and the other telling him to heal, he is endlessly burdened by an unsolvable paradox.

For more on Mortighull’s role in the Underworld, be sure to read Court of the Dead: The War of Flesh and Bone. 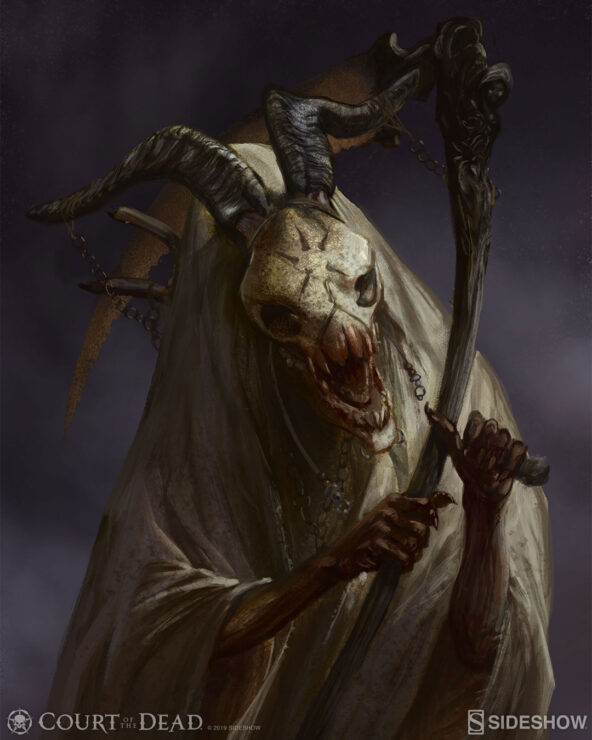 Shieve the Pathfinder wanders the Mortal Realm alone as the Arbiter of Bone. She scouts for areas that are soon to become battlegrounds, where many mortals will die and provide precious ethereal energy to the Underworld’s reapers. She then calls them down to collect, helping the Alltaker provide for Heaven and Hell, and in this way she is forever burdened by her participation in the Dark Deed.

Shieve was also the first of the NetherGeist to be promoted to Arbiter role. Thus she serves with humility and efficacy. Her proficiency has even earned her the nickname LongFinger because she has the uncanny ability to point out the exact spot where the next great soul harvest will occur. 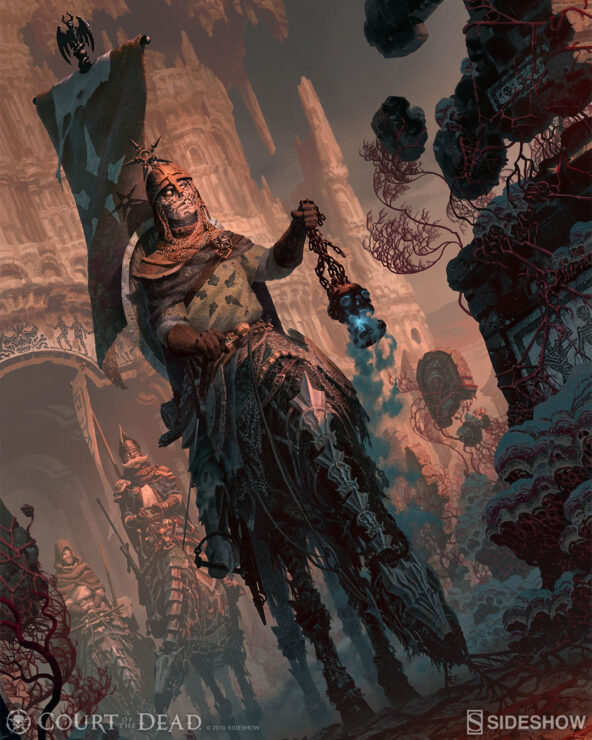 Ravlatch, Paladin of the Dead, is an exceptional example of his faction. He is a member of the Old Bones, or the Relic Knights, a group of sturdy vessels for the most devoted soulborn (formerly mortal, whereas spiritborn were created in the Underworld). One of the worthiest and most indomitable warriors, Ravlatch is stubborn and unflappable. He is filled with never-ending perseverance and a staunch desire to fulfill the Alltaker’s most difficult quests.

The irreverent, overconfident mourner is a purveyor of truth and knowledge. He is a rogue adventurer and a walking curio shop, collecting essential artifacts and uncovering secrets about the Celestial Realms that will aide the Alltaker’s secret mission to overthrow them. Mourners know not to get in Ravlatch’s way — or they’ll get a stern talking-to that will leave even the ears of the earless burning. 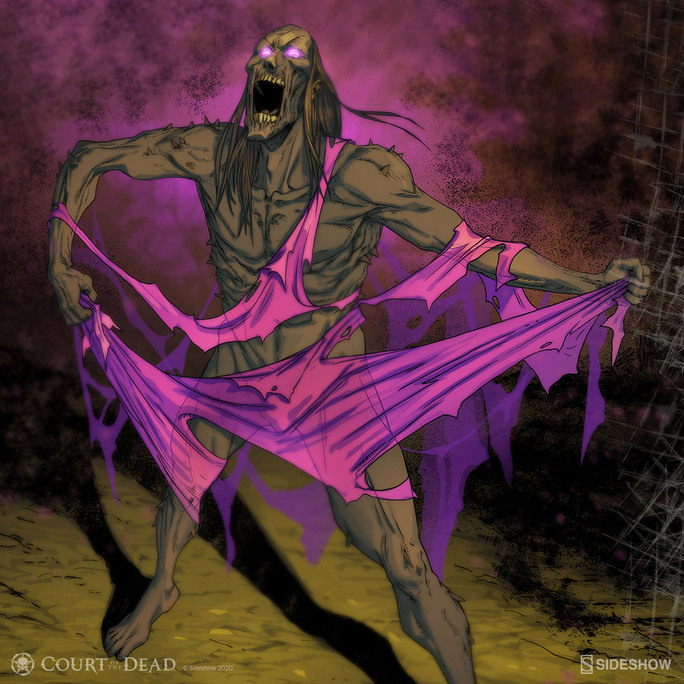 The dreadsgrip is an essence much like etherea that is harvested from mortal souls. However, dreadsgrip is a twisted version of this necessary energy, and exists within every mourner, soulborn or spiritborn.

The purple-stained force taints mourner’s minds, infecting them with thoughts of power, destruction, greed, or malice. Their desires are warped into their downfall, and sometimes their bodies become twisted as physical manifestations of this corrupting force. Put simply, the dreadsgrip can take an altruistic intention and spoil it, twist it, maim it, until it becomes the most selfish act. It speaks to every individual differently, preying on their ideals and morals, no matter the faction.

Are you still unconvinced of the power and peril of this corrupting force? Mourners, let us tell you a story.

Mortis Knight Osseil was once determined to solve an impossible equation to save the Underworld. Overwhelmed by the endless probabilities, he was offered a simple solution by the dreadsgrip. In accepting its deceit, Osseil betrayed the knighthood as well as his faction. He became the Oathbreaker Strÿfe, a fallen knight whose darker nature now urges him toward sacrifice and the destruction of the place he once protected.

And the dreadsgrip still blazes through the realm, burrowing into even the most unbreakable of minds…

Who will fall next?

Within the rich narrative of the Court of the Dead, do your ideals align with the Bone Faction? What could the dreadsgrip whisper to you to bring out your inner darkness? Let us know in the comments, and don’t forget to Let Your Geek Sideshow!

The 10 Funniest Quotes from DC's The Suicide Squad