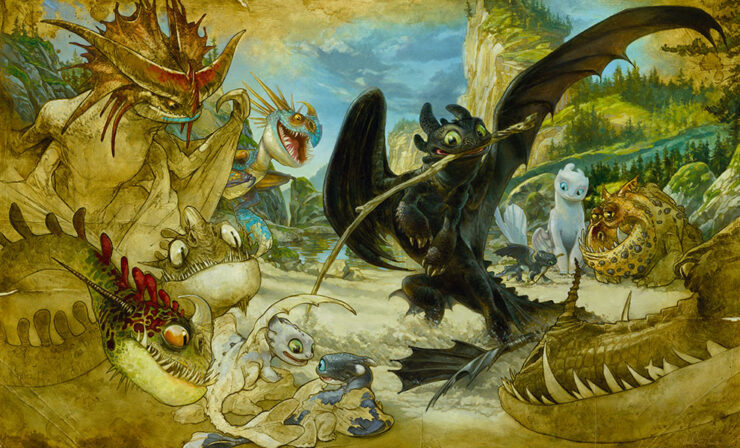 How To Draw Your Dragon by Heather Edwards

DreamWorks’ animated How To Train Your Dragon trilogy centers around a young Viking named Hiccup. An intelligent yet clumsy kid, Hiccup wants to prove his value in a place called the Isle of Berk, famous for its strong warriors and peculiar pests—dragons.

When Hiccup, lacking in brawn but making up for it with his brain, invents a device to slay a Night Fury, what he encounters instead is a friendship that changes his and the Night Fury Toothless’ lives, as well as the future of all human and dragonkind… forever.

Vikings and Dragons make peace, pests become pets, and adventures ensue. Best buddies Toothless and Hiccup battle greedy dragon despots, trappers and hunters, and prejudice. But with family, friends, and a little firepower, the Hooligan Tribe can solve any problem thrown their way.

The How To Train Your Dragon lore inspired two movies and multiple animated series. In 2019, the final full-length film in this beloved fantasy franchise was released. How To Train Your Dragon: The Hidden World is a beautiful send-off and a perfect culmination of themes and character arcs. But perhaps the most wonderful aspect of the film is the introduction of Toothless’ mate, the Light Fury, and the Night Lights, their babies.

This lovable dragon family steals the screen in every scene, but we’ll take a look at their best 5 moments below.

Because of the horrible abuse she endured from dragon trappers, the Light Fury is extremely distrustful of people. This mistrust extends to Hiccup. She tries everything she can to get Toothless away from his rider, from flashy flying moves to a secret rendezvous.

On one memorable occasion, the Light Fury interrupts the procession of Berk residents as they head west. She knocks Hiccup from his saddle to get Toothless to herself. To her ire, Toothless chooses Hiccup, but she and Toothless do exchange sweet smiles before he takes off after his helpless human.

After a camouflaged Light Fury wanders into the Viking encampment, Toothless takes off after her. They arrive at a lake not unlike the place Hiccup and Toothless first met. The Light Fury makes it clear she’s expecting something impressive from her potential mate.

Toothless then begins a ridiculous series of dances, each more foolish than the last. The Light Fury isn’t impressed. But then Toothless picks up a stick and draws her portrait! Although the two don’t get together right then and there, it’s a magical moment in their budding relationship.

During his final confrontation with the villain Grimmel, Hiccup faces certain death. He frees the Light Fury, and utters what he believes are his final words: “Save him.” He chooses Toothless over himself, and the Light Fury immediately rushes to her mate’s aid.

The Light Fury does save Toothless. She also saves Hiccup, finally understanding his place in Toothless’ life. Then she stands with Toothless, his strength, his love, as they gather all the dragons of Berk for their kingdom.

It’s a bittersweet yet powerful scene, and clues us into the dragons’ future. They will thrive, safely, and Toothless and the Light Fury will rule. They will be a family. They will be happy.

And from the first moment we saw Toothless and sat in our theater seats hoping Hiccup wouldn’t hurt him, that’s all we’ve ever wanted for the dragon.

When Astrid, Stormfly, and Hiccup search for the missing Night Fury, they never expect to be led to the Hidden World. There they discover Toothless and the Light Fury at the center of their own little universe. The essential king and queen of the dragons, the two Furies have discovered a peaceful, gorgeous, glowing epicenter of their species.

Not only is the animation in this sequence breathtaking, the expansion of the lore and the fantastic designs for the thousands of dragons are an amazingly earned payoff for fans of the franchise who have followed Berk’s legends and Toothless’ journey.

Night Furies mate for life, and this scene in the Hidden World also confirms that Toothless has found his bride. It ends with some strife, however, with Toothless having to leave the Light Fury to protect Hiccup, which is why it doesn’t take the #1 spot on this list.

At the end of The Hidden World, Vikings and dragons decide to separate—for good. Fans were devastated when Hiccup and Toothless said their final goodbye. Except… it wasn’t goodbye, exactly. Sure, it was a decision to separate their species for both their safety, but this franchise built on enduring friendship, overcoming differences, and beating insurmountable odds couldn’t end there.

The last scene in the film shows adults Hiccup and Astrid and their children sailing smooth seas. Hiccup tells his kids, “There were dragons when I was a boy,” and then looks into the fog for Toothless. The Night Fury rests with his family and then leaps into action, aggressively approaching the boat. For a moment, we think Toothless doesn’t remember.

Then, the friends hug. Toothless smiles his signature smile and slobbers all over Hiccup. The Viking children ride dragons like their parents, and the Night Lights flutter about cute-as-can-be. The end leaves us with fondness and appreciation for the past, as well as hope for the future with Hiccup and Toothless as brave leaders and loving fathers. 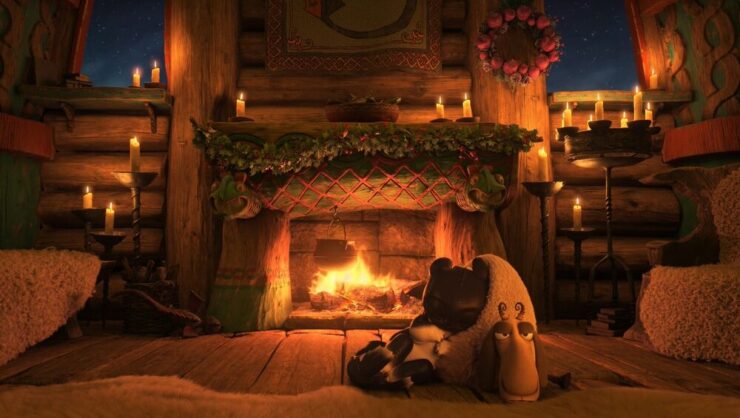 In the holiday short Snoggletog Log, a short video released in 2019, Hiccup and Astrid’s children, friends, and neighbors, and all run, dance, trip, and tumble through their home.

If you watch through the entire video, the adorable Night Lights make a few mischievous appearances. It’s a cute addition to the How To Train Your Dragon lore, and thus deserves a mention here.

What are your favorite Toothless, Light Fury, and Night Light moments? Let us know if we missed any in the comments, and don’t forget to give your dragon bestie a big hug!

Pop Culture Headlines - The Falcon and The Winter Soldier Premiere!