Holy Batsuits, Batman! DC Comics’ Caped Crusader has cycled through a seriously impressive amount of costumes over the years. And it makes sense. Not only has the face behind the cowl changed, but the Batman character himself relies on gadgets to make him a hero. Of course he’s upgrading his suit whenever possible.

Below, let’s swing through decades of DC Comics live-action films, focusing on iconic iterations of the batsuit from the ’60s all the way to 2022! 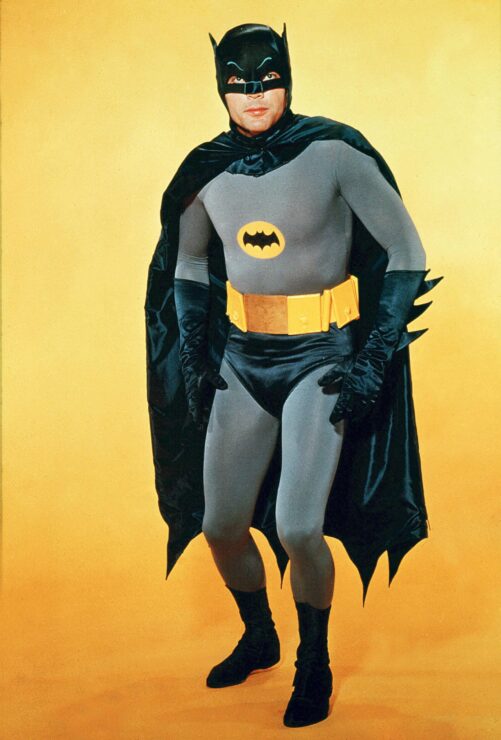 With all due respect and adoration, Adam West’s Batsuit resembles a Halloween costume. But that’s kind of the point. Batman: The Movie is silly to its core. Batman isn’t serious, dark, or brooding like in recent years. Instead, he’s an upbeat detective in a tight costume. A grey leotard gives way to the classic “underwear on the outside” look and a flat yellow utility belt. The bat symbol on his chest is a small, almost cutesy black bat atop a bright yellow circle. The cape, gloves, and boots are all a shimmering black. They look soft, even with the floppy pointed triangles on the forearms. Finally, the cowl has teeny-tiny ears and drawn on eyebrows. Ultimately, this Batman seems approachable and affable. 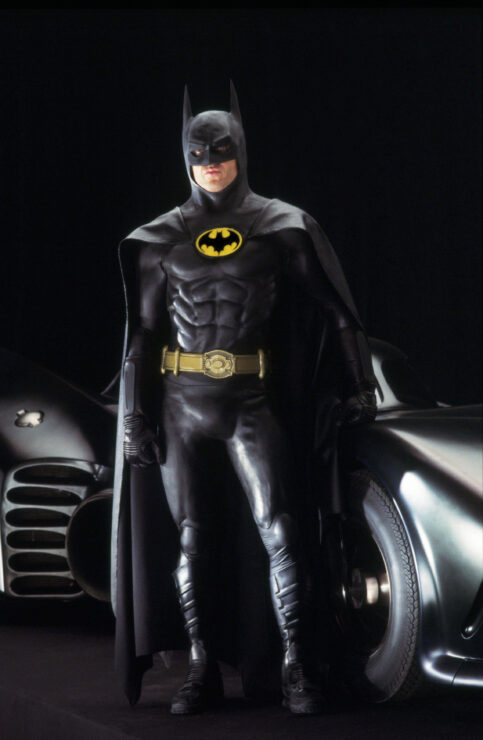 Twenty years later, DC makes Batman a little edgier with an all-black ensemble. The comfortable material gets swapped out for leather and plastic ab inserts. Michael Keaton’s Batman starts to look a little more armored up. Everything is angles, with tall ears on the immobile cowl, the cape attached through triangular facets, and razor-like wings on the stylized bat symbol. The mustard yellow utility belt is slimmer. And the brightest part of this suit is the bat symbol, glowing yellow against the obsidian outfit. 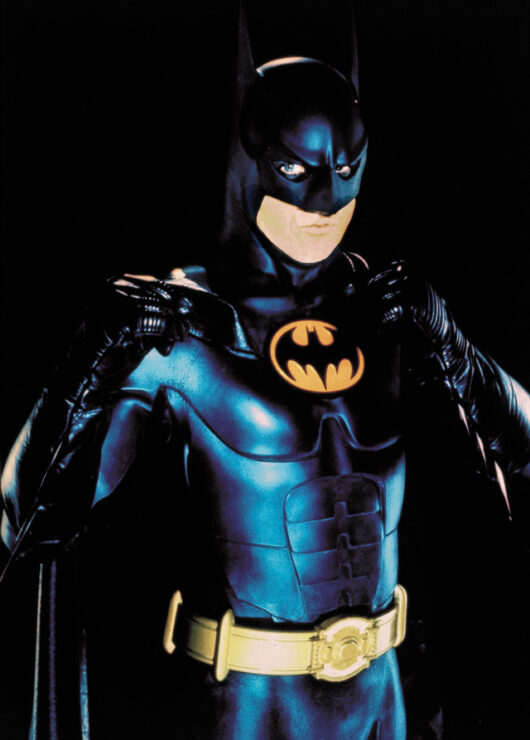 Batman Returns takes Tim Burton’s signature colorfully dark style even further in his sequel. Michael Keaton’s Batman remains, but his Batsuit evolves with the times. The exaggerated abs give way to an armored abdomen plate, and everything about the suit just seems neater. Overall, there is less muscle contouring and more of a battle armor appearance. Thus begins the age of a grounded, but still goth, Batman. 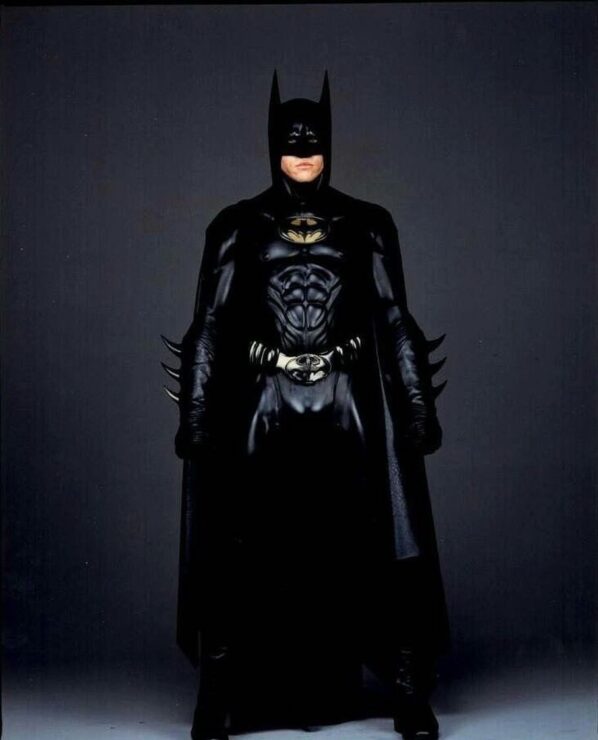 …Or not! Val Kilmer’s Batman Forever suit might have the darkest color scheme yet, with its faded gold bat symbol partially obscured by the cape. However, this ’90s costume is also serving comic book camp in knee high boots. Those unbelievably defined and swole abs return, along with definition along every muscle group … we don’t need to point out where. Let’s give a hand to all the design decisions for the Sonar Suit, as this is easily one of the most recognizable and talked about Batsuits to date. 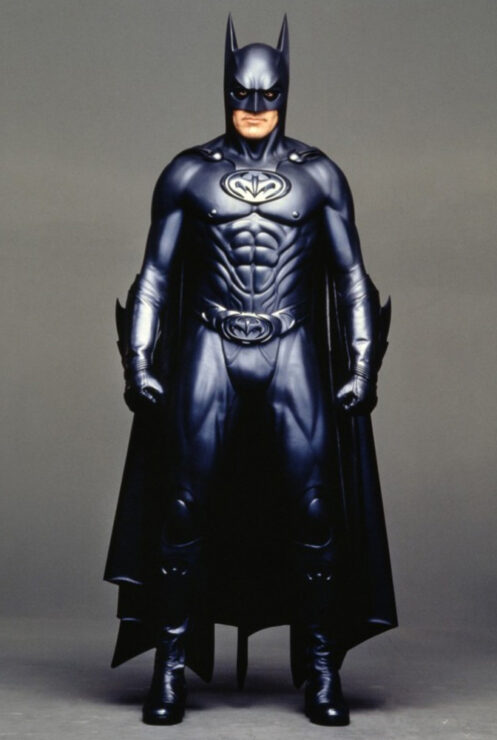 Ah, yes. The infamous “bat nipples.” Who could forget these? George Clooney’s Batsuit is black with silver undertones and accents. Including stud nipples that were likely inspired by the Batman Forever Robin. Gone is any trace of sunshine yellow on the symbol or belt — appropriate given this Batman’s stationary scowl. It’s like he’s the only one not in on the joke (or the camp) that is Batman and Robin. But, all things considered, that adds to the comedy. 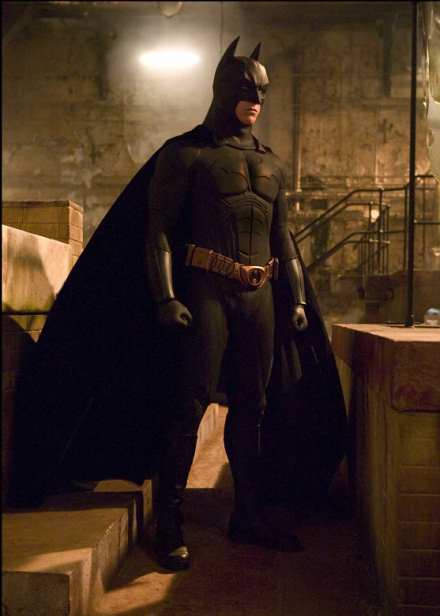 Christopher Nolan’s Batman trilogy truly ushered in a new era for the Caped Crusader. Grounded, gritty, and and color graded in eerie, moody blacks and browns, Batman Begins tells the story of a traumatized man and his unrelenting fight for justice. And his first suit in the film definitely looks like a prototype. After he’s done crime fighting in a ski mask, Bruce utilizes Wayne Tech to create a bulky black Batsuit with a sweeping, dramatic black velvet cape. The cowl is so blocky he can’t turn his head. Honestly, it’s the most real-world version of the suit so far. 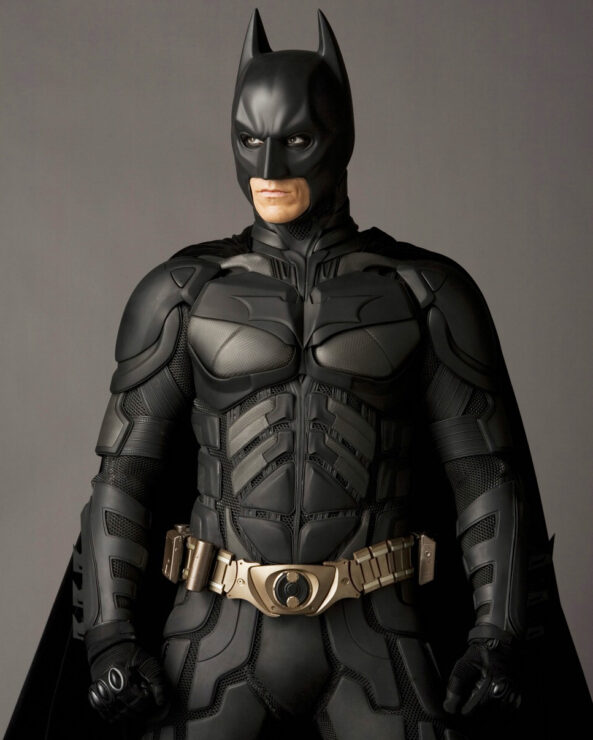 “Now there’s a Batman.” Batman’s flexible and durable suit in The Dark Knight resembles military armor. The bat symbol is integrated into the suit’s many grooves, allowing Batman to completely fade into dark alleyways — or interrogation rooms. His gold gadget belt is subtle, sturdy. And his cowl is sharp and angular, coming in closer to his mouth than any of the previous Batman cowls. In this way, Bale’s Batman is the most inhuman looking one yet and thus achieves Batman’s darkest purpose: to emulate his namesake creature of the night. 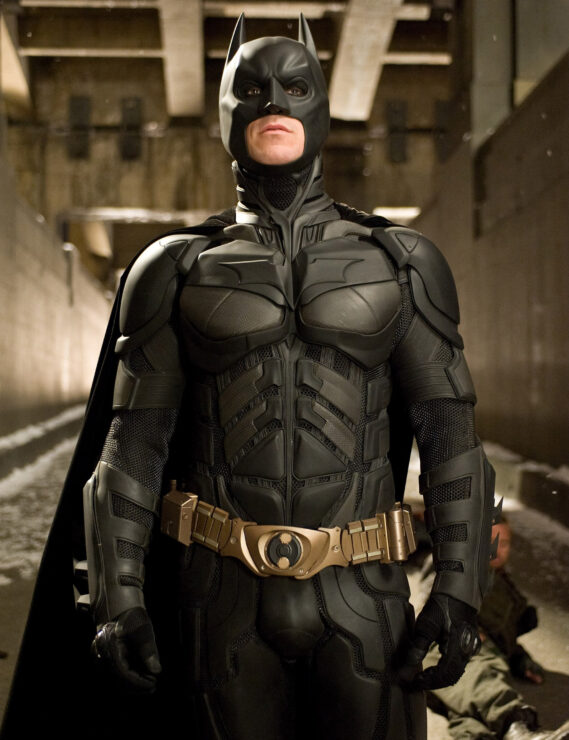 The Batsuit doesn’t change for The Dark Knight Rises. That’s because Batman retires, and doesn’t invest any funds, time, or energy into new tech. Thus when he picks up the mantle again to save Gotham one last time, it’s in the suit we’ve come to know and love and see as a symbol of light in the darkness. This is clearly an intentional choice given the themes of The Dark Knight Rises, and it resonates well for the final installment of Nolan’s trilogy. 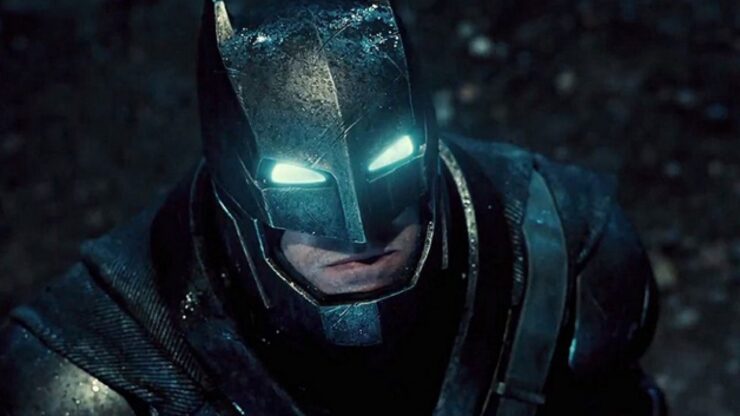 In order to fight Superman, Batman needs a lot of armor, more than ever before. Thus he exchanges his regular Batsuit — a grainy black and gray, with a huge black bat symbol on the chest à la Frank Miller — for this hulking hardware. Emphasizing bulky muscle over lean stealth, this Batsuit not only shifts the cinematic aesthetic of Batman, but shows the stark contrast between Ben Affleck and Christian Bale’s interpretations of this DC Comics character. 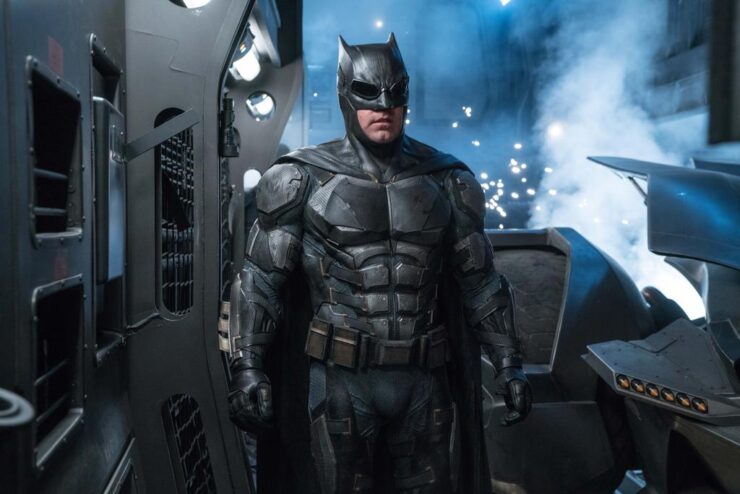 In Dawn of Justice, the Batsuit stretched in one solid gray piece across Batman’s chest and legs. Although it harkened back to the days of Adam West, it was darker and broodier. Then, the armored Batsuit came into play. Finally, in Justice League, Batman melded these two ideas to create the all-black Batsuit you see above. It’s rigid in the chest, arms, and knees, protecting vital areas with padding. The bat symbol is hardly visible because now Bruce isn’t just Batman — he’s part of a super hero team, and his identity is part of the collective. 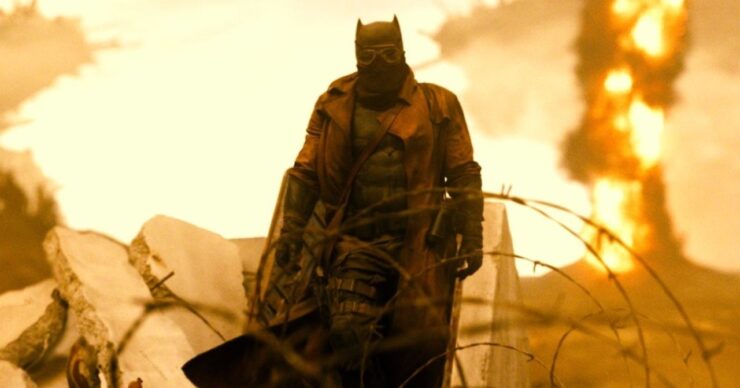 Let’s talk about Knightmare Batman. This apocalyptic warrior from the Justice League Snyder Cut is the ultimate monstrosity, the version of Batman that the hero sees in his own, well, nightmares. Due to the fiery landscape, his face is completely obscured by a black mask, with small ears and big goggles hinting at the shape of a classic Batcowl. While he does wear a black suit, boots, and elbow length gloves, he’s covered a lot of the classic costume with a brown trench coat in order to blend into his surroundings. Unsettling and restrictive, this Knightmare Batsuit predicts a hellish future for the Caped Crusader. 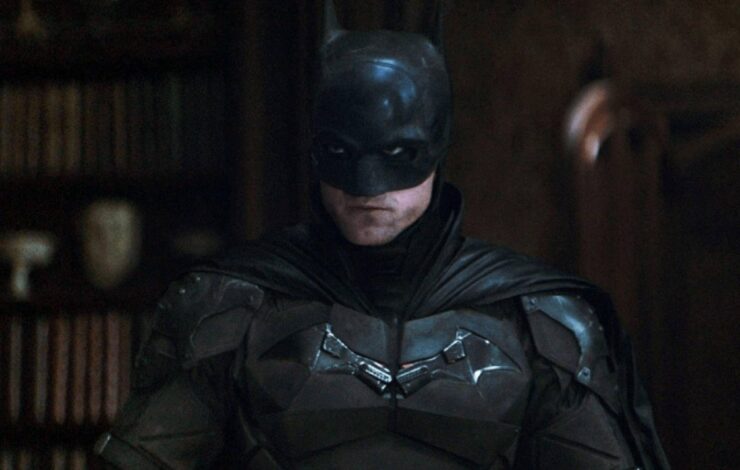 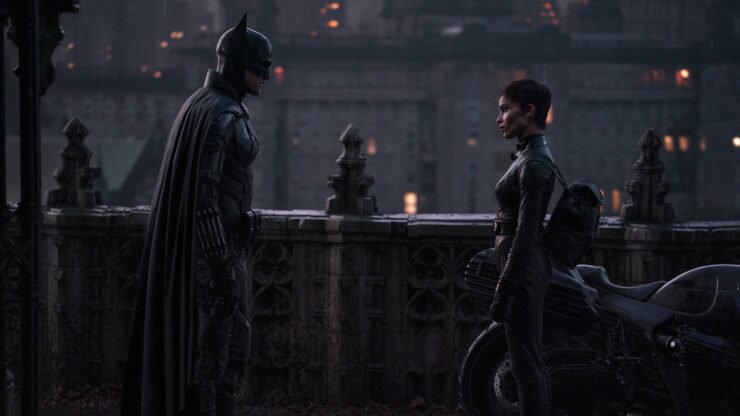 The newest Batsuit is reminiscent of Year One. Lean and obsidian, The Batman Batsuit keeps the armored look but brings back a clear bat symbol. And … is it made out of duct tape? Something high tech? There’s such a distinct and homemade sheen to it. Additionally, the cape is wildly different from those of the Batsuits we’ve seen before.

Whereas many previous capes swoop down over the shoulders and connect in the center, Robert Pattinson’s Batsuit includes a high collar that frames his neck. This allows him to wear a black turtleneck underneath a cowl that stops at the upper jawline, increasing range of mobility. His boots are incredible chunky stompers, and his utility belt is all black. We can’t wait to see this new look in action this March when The Batman premieres!

What’s your favorite cinematic Batsuit? Let us know in the comments, and don’t forget to Let Your Geek Sideshow!