The Sandman premieres this week on Netflix. Based on a DC Comics series of the same name, The Sandman follows Dream of the Endless as he and his family interfere with mortal affairs. One such mortal caught up in Dream’s schemes is Lady Johanna Constantine.

Oh, yes. That surname should sound familiar. It’s Constantine — as in John Constantine. For those unfamiliar with The Sandman, then, you probably want to know how John and Johanna Constantine are related. Is she a female version of John Constantine? Is Constantine in the Sandman comics at all? We’ll answer all those questions and more. So join us below as we look into the history of these infamous occult detectives.

But let’s go back in time to focus on Johanna. Born to wealthy aristocrat parents, Johanna lived a comfortable life until her parents were hanged for treason against the crown. At a young age Johanna was orphaned, stripped of her title and wealth, and forced to fend for herself on the streets. This experience made her the cunning, fierce, ambitious woman that was later asked to retrieve Pandora’s Box for King George III. 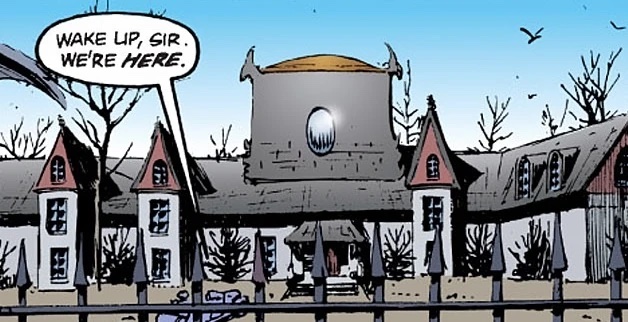 Due to her successful retrieval of the magical artifact, Lady Johanna regained her title and riches. She inherited Blackwood Manor. Then she renamed it Fawney Rig. Fawney Rig is slang for a modern con in which the grifter uses a cheap or “phony” ring to swindle an easy mark. This seems to imply Johanna views her home as “phony” or she believes her improved status was achieved through charade. Yet her notoriety is undeniably deserved and hard-won. 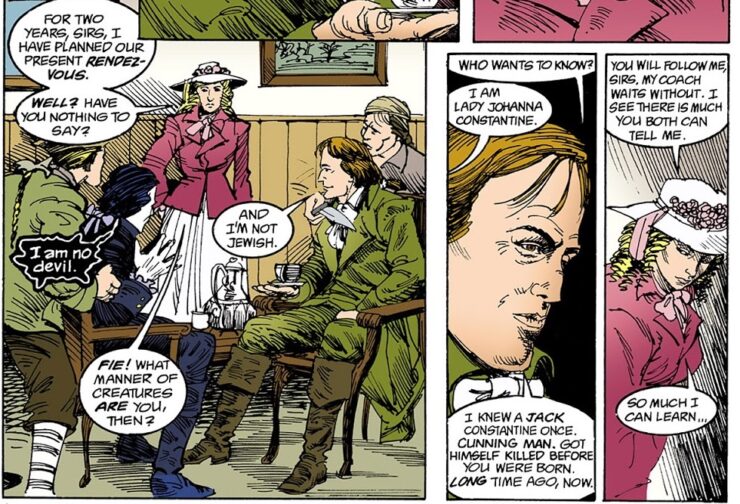 When Lady Johanna first meets Dream of the Endless, she believes him to be the Devil. This is because Morpheus and his friend Hob Gadling, who has been granted immortality by Dream, are known for frequenting the same pub every hundred years or so to catch up. Lady Johanna believes these beings will grant her power and money — which she seems to run out of quite frequently.

Clever and perceptive as ever, Dream decides Johanna will be useful in the future. He gives her some information about himself. He also presents her with an offer she can’t refuse. The details of this offer are never disclosed in the pages of The Sandman. Yet we know Johanna accepts, because six years later, Morpheus comes to collect on their deal. 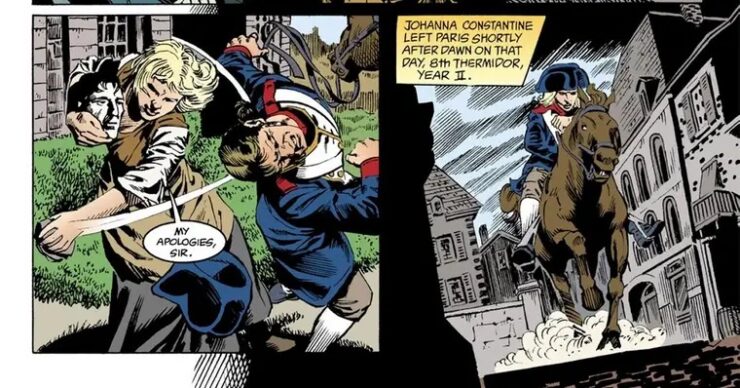 Morpheus tasks Lady Johanna Constantine with rescuing his son Orpheus. Well, more accurately, she must retrieve his decapitated head, which is sought after by magic-hungry French Revolutionaries. The British aristocrat puts herself in unimaginable peril to get Orpheus back to his father. She also experiences great wonders, and gains Dream’s respect for the rest of her life.

Lady Johanna Constantine passes away at the age of 99. Showing much more care than he usually has for mortals, Dream arranges for her burial on Naxos. This small island in the Aegean Sea houses Orpheus’ temple. A family of caretakers not only tends to Orpheus here, but protects and puts cherry blossoms on her grave. To call this a huge honor is, to say the least, an understatement. Thus Johanna Constantine’s role in The Sandman, as well as her equal importance to John Constantine, cannot be emphasized enough. Even demon hunters need role models.

Do you love these complicated Constantines and their stories with The Sandman? Share your fandom with other DC Comics readers in our Local Comics Society Facebook Group, and don’t forget to Let Your Geek Sideshow!