It’s as simple as telling us what you want to add to your collection. Get all the other details below, plus info on how to enter. Spoiler alert: You’ll need to create a Sideshow Wish List! 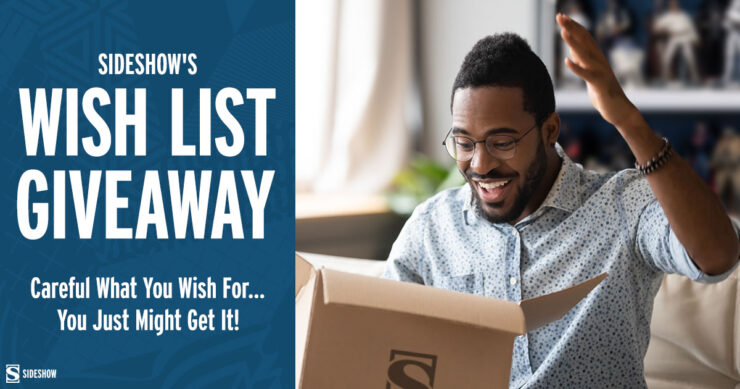 A Sideshow Wish List compiles your most coveted collectibles from Sideshow.com into one neat, organized place. If you already have a Sideshow account, getting started is easy!

Using our “Sideshow Wish List” function, you can build personalized and strategized Wish Lists. After that’s done, name your lists, theme them, and share them! With the Wish List, you can assemble your ideal Avengers collection, unite the Justice League on your shelf, or bring Hogwarts home with Harry Potter collectibles. Then, send that list to friends, family, followers, partners, and coworkers. It’s the perfect way to let the people in your life know how to celebrate you for the holidays — or a birthday, or any time, really. Furthermore, you can make your lists public or private, choosing exactly who you want to have access.

Not sure how to access this awesome feature? Read our Why You Should Create A Sideshow Wish List blog for a full detailed outline and explanation of how to create, alter, and customize your lists. You’re going to need it for this next part.

How do I enter the giveaway?

Our Wish List Giveaway will be split into different drawing periods. Each offers you a different chance to win. First, from November 16 – 24, one random winner a day will be chosen to have one item fulfilled from their own personal Wish List.

On November 25, Black Friday, we’re picking one random winner every single hour to have one item fulfilled from their own personal Wish List. That’s 24 winners in one single day!

Then, we’re back to one winner a day from November 26 – 30. Be sure to make a publicly viewable Wish List ASAP for your best chance to win.

What can I win?

We will be choosing winners randomly from accounts with eligible Wish Lists. Additionally, the item fulfilled for each winner will also be selected by Sideshow, so make sure to put a wide variety of collectibles you might want on your Wish List. You never know what could happen!

Winner names and their prizes will be announced on Sideshow’s Twitter as they are chosen. Turn on notifications for our social feed to get those announcements as soon as they’re made.

Also, don’t worry if you don’t win this time. You can always take those Wish Lists you’ve made and send them as helpful hints to friends and family this holiday season. That way you can get what you really want this season.

Congratulations to these winners who have had a wish on their wish lists granted! You can also find winners announced on Sideshow’s Twitter profile. Check back as the giveaway progresses for more updates.

What do you hope to win during Sideshow’s Wish List Giveaway? Get started on those lists and then share your hopes and dreams at side.show/geekgroup. Happy holidays, and don’t forget to Let Your Geek Sideshow!

As with all Sideshow and affiliated brand giveaways, the usual rules apply. Please refer to our Terms & Conditions for all sweepstakes regulations.